In a world where humans can have their wish granted via the Goddess Help Hotline, a human, Keiichi Morisato, summons the Goddess Belldandy by accident and jokes that she should stay with him forever. Unfortunately for him, his "wish" is granted. Suddenly, Keiichi is now living with this gorgeous woman all alone, causing him to be kicked out of the all-male dormitory he was staying in. But soon, after they find lodging in a Buddhist temple, Keiichi and Belldandy's relationship begins to blossom. Although they are both awkward and rather uncomfortable with one another at first, what awaits these two strangers could turn out to be an unexpected romance. [Written by MAL Rewrite] 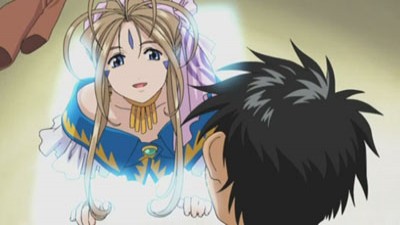 Ah! You're a Goddess?

The day begins with a routine set of exercise with the Auto Club for Keiichi. Afterwards he goes to catch a little more sleep, and ends up nearly being late for school. When he goes to get his bike, it wont start, so he has to run to school. On his way he 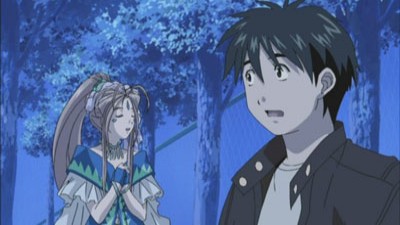 Ah! Those Who Believe Shall Find Salvation!

Keiichi makes his wish that Belldandy will stay with him forever, and it becomes true! And it can't be undone; the wish has been registered with the system. Keiichi ponders what to do now, but his senpais Tamiya and Otaki arrive and find that he's broken the rules about having girls in the all-guys dorm. What will happen to Keiichi and Belldandy now? 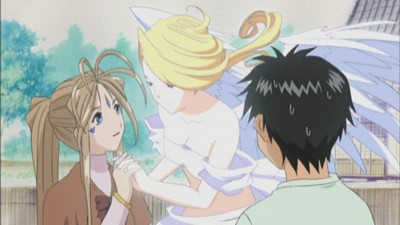 Ah! Apprenticeship, Home, and the Goddess

Keiichi and Belldandy search for a place to live, trying out real estate apartment listings, his friends' apartments, and eventually a fairly worn down temple where a monk lets them in. 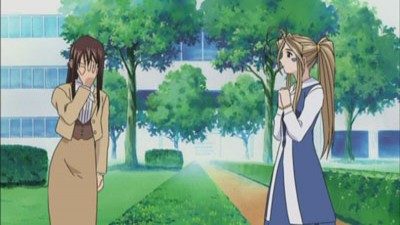 Ah! The Queen and the Goddess

Keiichi takes Belldandy to his school, and all the classmates are impressed by the new girl. Sayoko, the popular girl on campus, meets Belldandy and tries to figure out where she came from. Realizing her popularity is dwindling, Sayoko tries to get in between Keiichi and Belldandy, accusing her of not even being a student, and creating situations where she and Keiichi can be alone. But the Ultimate Force that is linked to Keiichi's wish has other ideas. 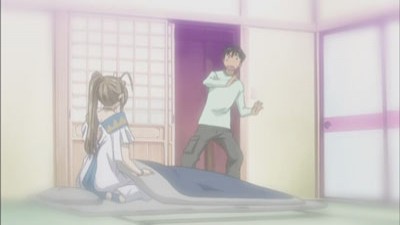 Ah! Living Under One Roof Together

Keiichi left his books and papers at home, so Belldandy goes back to get it. As Keiichi is left alone at school, Sayoko challenges him to stop acting like he's in elementary school with that relationship. Keiichi struggles on what to say to Belldandy. He sets up a romantic mood at home with candles and all. Will that do the trick? Or will it be written off as another coincidence? 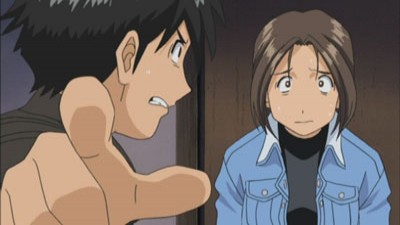 Ah! A Blessing in Every Bargain?

A young woman shows up at the temple where Keiichi is staying. It turns out to be Keiichi's sister Megumi, who is in town looking for apartment housing. Keiichi and Belldandy help Megumi find a place, but it has a dark secret. 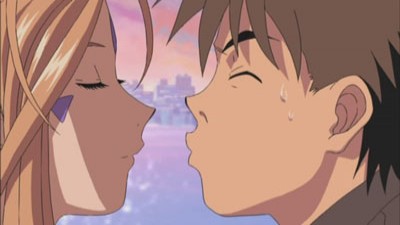 Ah! Where to Confess One's Love?

Belldandy learns about Valentine's day in Japan. Sayoko tries to set Belldandy up with the campus playboy Toshiyuki Aoshima. This could be trouble! 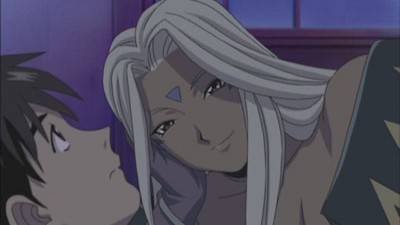 Ah! Can You Pass the Love Test With Those Low Scores?

Keiichi gets a video from a store, but when he plays it, a mysterious woman shows on the screen. The woman is Urd, who is Belldandy's older sister. Urd tries to move Keiichi's romantic intentions forward by slipping him a controlling love potion. 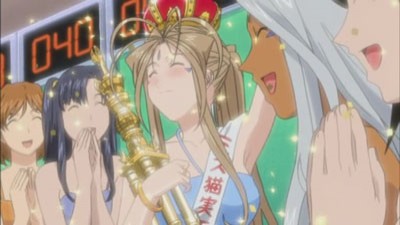 Ah! The Queen and the Goddess' Secret!

Belldandy wins the Miss NIT contest and becomes Campus Queen. Sayoko and Toshiyuki try to uncover Belldandy's identity by setting up revealing situations where Belldandy would have to use her magic, but with big sister Urd watching, that isn't so easily done. Toshiyuki manages to put Urd to sleep by playing Enka music, and Sayoko kidnaps Keiichi. To get Keiichi back, Belldandy might have to reveal to Sayoko the truth about herself! 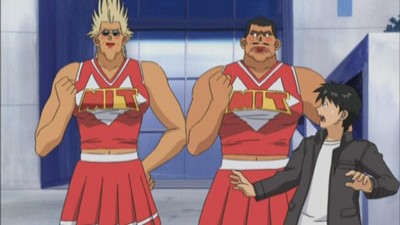 Ah! Can the Auto Club Triumph?

The Nekomi Motor Club is recruiting new members, but now there's a new rival club called Four Wheels that was started by Toshiyuki. The motor clubs have a challenge race over who gets to keep their club around. Keiichi and Belldandy get to represent Nekomi in the race, but where there's Toshiyuki there's sabotage. Can Keiichi and Belldandy pull through?

(This Review Was Originally Written For JapanCinema.net) Before reading Romeo and Juliet, one must explore the intricacies of Cupid and Psyche. The romance genre is absolutely teeming with fantastic stories, but in order for any of them to have an impact, it is necessary for on to understand the meaning of “true love” within a medium. Harems, gender-benders, and romantic tragedy lose their sense of impact unless there exists a show that completely embodies love in its purest form. Luckily, Kōsuke Fujishima’s Ah! My Goddess! fulfills this role. After a couple of original video animations and a series of animated shorts entitled The Adventures of Mini-Goddess, the Anime International Company was tasked with producing the first full anime version of the franchise. With Hiroaki Gōda at the helm and a fairly large production staff, the animators were able to stretch their legs a bit and tart the series up. Romantic comedies aren’t exactly the most aesthetically demanding of shows, so instead of blowing their budget on ridiculous, large-scale action set-pieces (besides one at the end on the first season), Anime International was able to instead spend time polishing each scene up. Character movements are crisp and the environments truly pop. On the soundtrack side, things are slightly less impressive. Once again, romantic comedies don’t really need massive coffers in order to be notable, but putting some effort into making a few good tunes wouldn’t go amiss. Nothing on the entire soundtrack is particularly notable. However, this can almost be applauded, as it means that nothing can subtract from the absolutely sublime English dub. As great as Masami Kikuchi and Kikuko Inoue are, they just can’t hold a candle to the combined forces of Drew Aaron, Eileen Stevens, Shannon Conley, and Kether Donohue. While all were relatively unknown beforehand, Ah! My Goddess! catapulted each person that made up the main cast to a level of super-stardom in the realm of voice-acting, taking on roles as varied, loved, and memorable as… Actually, their four roles in the series at hand are basically the only notable ones any of them have done, but each of their voices just fit their roles so perfectly. Keiichi Morisato is your typical college student. He struggles to find a balance between his classes and the various activities of the Motor Club, which he is a member of. One night, while his roommates are out, he accidentally dials the Goddess Help-Line, causing the goddess Belldandy to appear, giving him a single wish. Under the impression that Belldandy is part of some sort of prank on the part of his friends, Morisato wishes for her to stay by his side forever. Needless to say, the wish is granted, and Keiichi and Belldandy are almost immediately put in hot water after his roommates return and discover him with a mysterious girl in their males-only dormitory. After being unceremoniously ejected from the building, the pair find themselves seeking a new place of residence, which comes in the form of a Buddhist temple. After witnessing Belldandy’s warmheartedness and divine abilities, the monk who resides within the temple is inspired to embark on a pilgrimage to India, leaving Keiichi and her in charge of the grounds. However, this is only the beginning for Keiichi. Living with a goddess is just a magnet for trouble, and he finds himself having to deal with demons, the antics of Belldandy’s sisters Urd and Skuld, and to top it off, his growing feelings towards the goddess he is bound to. The show remains almost entirely episodic throughout its two seasons, but this creates a great sensation of time passing, something which is extremely important in a series which is so heavily reliant on characters slowly developing romantic feelings for one another. Keiichi’s evolution didn’t happen overnight. It’s augmented by the many unique characters that touched Belldandy and Keiichi’s lives, and the series does a fantastic job developing at least one aspect of every background character in a balanced and extremely compelling manner. Many of the episodes that deal with the expanded world of mythology that Fujishima has built only seem to detract from the overall experience. Whenever talk of Yggdrasil and the like comes up, the focal point shifts away from the near-integral relationship between Keiichi and Belldandy, leaving the end product feeling somewhat anemic and unpolished. Interestingly enough, the audience becomes just as dependent upon the pair as the story, which is why the ending comes as such a slap in the face. It’s as if the producers wanted to use the tried-and-true romantic comedy trope of a club trip in order to get a confession scene with some jolly pretty background, but the script writer just ran out of time, lost the will to live, or was abducted by aliens, forcing the rest of the team to string together whatever they had just before the deadline reared its ugly head. One would assume that this kind of finish was intended to pave way for a series of original video animations as was the case with the series’ first season, but the two that the fans were provided with did absolutely nothing to help the situation. However, these are all minor quibbles in the end. The many issues of the show are all stumbling blocks in the way of the delightful experience of watching Belldandy and Keiichi grow together, but they aren’t deal-breakers. The end result is a great, albeit flawed series that truly embodies love and romance, and is an experience that shouldn’t be missed.

Start a new discussion for Aa! Megami-sama! (TV) anime. Please be fair to others, for the full rules do refer to the Discussion Rules page.