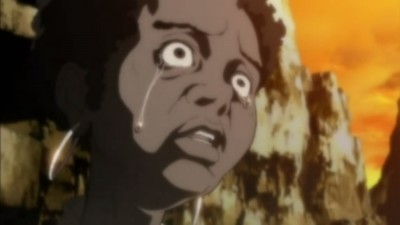 After a young boy named Afro witnesses Justice kill his father and claim the number one headband, Afro begins his quest to avenge his father's death. As he travels toward Justice, he is challenged by many fighters wishing to claim the number two headband that he wears. 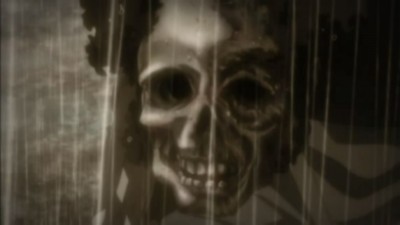 Afro is found by the river and taken in by Okiku to let his wounds heal. In his weakened state, he has a series of dreams about beginning his samurai training and his friends from so long ago. 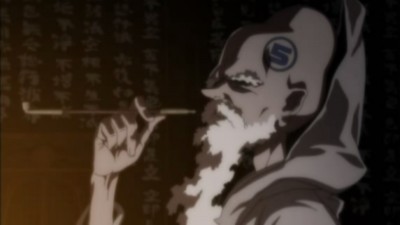 The Afro Samurai continues on his journey and finds more information on the Empty Seven Clan. The group of monks have decided to unleash a robot on the samurai, created from the data Okiku had taken from his memories. 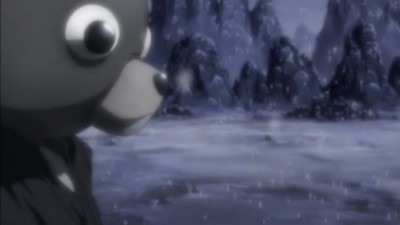 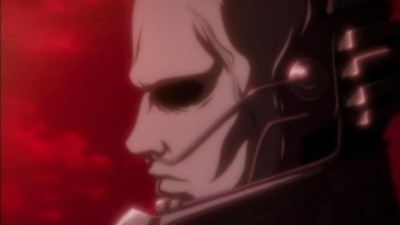 Afro finishes up his battle with Kuma and continues up the mountain. Now, the final battle with Justice is at hand. The samurai is now ready to finally avenge his father's untimely death, by slaughtering the deranged gunman.

Story:The story is about a man name afro who was trying to kill the number two after his father got killed. It is isn't very good because it was cliche and short. Rating 6/10Art:Art looks bland. Scenes of the flashbacks are not good. But the aniamation looks good. Characters drawed nicely and detailed. Rating 7/10Sound: Impressive sound. Mostly the sound uses hip-hop soundtrack. Sound effects are awesome. Rating 8/10Characters:Now the characters they are awesome even the cast are short. My favorite characters are Ninja ninja he's a partner by afro. He's funny but talks too much. And afro. Can't explain more on the characters. Rating 9/10Enjoyment:I enjoy this show even it is about five episodes. Very entertaing to watch. Rating 8/10Overall:Good show if you like Samurai or just want a quick anime in one sitting then this is for you. But anyone else don't watch this. Rating 8/10

Story:The story is about a man name afro who was trying to kill the number two after his father got killed. It is isn't very good because it was cliche and short. Rating 6/10Art:Art looks bland. Scenes of the flashbacks are not good. But the aniamation looks good. Characters drawed nicely and detailed. Rating 7/10Sound: Impressive sound. Mostly the sound uses hip-hop soundtrack. Sound effects are awesome. Rating 8/10Characters:Now the characters they are awesome even the cast are short. My favorite characters are Ninja ninja he's a partner by afro. He's funny but talks too much. And afro. Can't explain more on the characters. Rating 9/10Enjoyment:I enjoy this show even it is about five episodes. Very entertaing to watch. Rating 8/10Overall:Good show if you like Samurai or just want a quick anime in one sitting then this is for you. But anyone else don't watch this. Rating 8/10

Afro Samurai is one of those anime where you don't need to think to much; You just sit back, relax, and enjoy. It follows the story of a man named Afro, who, after seeing the murder of his father, vows vengeance upon the murderer. But he has a problem. The murderer wields the number 1 headband, and the only one who can fight such a person is the weilder of the number 2 headband. Now that Afro has the number 2 headband, he must fight countless enemies trying to steal it from him as he travels to confront the murderer. Filled with action and harsh violence, one can expect a lot of blood and gore... There isn't really a whole lot to this story. Its your typical vengeance story. But that wasn't the point of this anime. Under normal circumstances, not having a good story can really hurt a show, but in this case, I don't think having a good story was the purpose. It wanted to be a fun show with a lot of action and some style to it and it delivered. The art itself is unique and stylish, and you probably won't seem many anime like it. However, it hurts itself and keeps itself from being perfect for often being gray in color; the show relies to heavily upon the colors gray, black, and white, and this can make the art less interesting to look at, which is a real shame, because its got some style to it and is probably some of Gonzo's best. The animation is surprisingly amazing. Gonzo is oftentimes all over the place with its animation, but in this case, it REALLY delivered, almost to the point of being on the level of Shaft in terms of animation. Its extremely smooth, and its a real treat to look at. The characters aren't all that amazing, and you might even think you'd hate some of these characters, as you get the vengeful murderer with almost no kind bone left in his body, Afro, and this annoying person who keeps following him and constantly complaining about all the fighting, oftentimes saying that Afro should stop, even though he knows that Afro isn't the type to give up. A few times Afro will tell him to shut up, and he stops talking for a moment, but it isn't long before he's complaining again, or making jokes about sex or something of the sort. There isn't really a purpose for his character except to provide comic relief, and the comedy is rather poor at that. Even so, you can't help but love the guy and be glad he's around. Afro himself, however, is another story entirely. He's what you might call the quiet cool guy. And yet, its hard at times to sympathize for him, as he has trouble being kind to others, even those who aren't a threat to him. Still, regardless, its cool to see him fight. As for the bad guys....They are, for the most part, cookie cutter bad guys, with only one bad guy being mildly interesting, as he has a past with Afro. The music is a bit different and unique from your standard anime music; it seems to have some rap and some funky beats as music. It fits well with what the anime is trying to be, and consequently ends up being a pretty good soundtrack, even if its not the most listenable. Overall, I'd call Afro Samurai an experience one must have. Its certainly not a deep or thought provoking show, and the characters may be much less then perfect, but lots of stylish sword fighting action, smooth animation, and a fitting soundtrack help make this an anime worth watching, at least for the fun.

Cool accion scenes and good animation but... that's it. The story is about a boy who see is father die and wants revenge, so you can easily know how thing are gonna go, the characters, the story, all go in that direction and nothing surprise you. If you like that kind of stories you will like this

**Story** the story of afro samurai is absolutely unoriginal. basically there are these two headbands, the number 1 and the number 2 headband. whoever has the number 1 is the strongest guy in the world. the only person who can challenge number 1 is whoever has number 2. our main character's father has the number 1 headband, but is killed in a fight against the number 2. our main character "Afro" grows up and gets the number 2 headband and trys to find the new number 1 to get revenge for his father. the story is very boring and is just about revenge. everything in this show is about revenge, revenge, revenge and that is it. story scores a abysmal 2. **Characters** characters are also pretty bad. the character designs are fairly good but all the characters seem to have one of these 2 motives: 1\. Revenge 2\. Rule the world all the characters in the show are driven by one of these 2 things, which makes them all really bland and unoriginal. because these characters are so bland there isn't much more to say, so i'll just give characters a 3. **Animation** Animation is rally this show's only redeeming quality. the environments are well done and the battle scenes look pretty dang awesome. everything in this show usually is very dark, which matches the show well in my opinion. this show also has a lot of blood, and i mean A LOT of blood. it reminded me of elfen lied in terms of gore. animation scores a solid 8. **Sound** this show needs to be watched in dub. why? because Samuel L. Jackson, that's why. the only reason this show caught my attention is because he was a voice actor for it and i must say, he did a pretty good job. the rest of the cast however was just alright as far as i'm concerned. not bad, but not super memorable. same goes for the music. nothing great, mostly just hip-hop stuff, nothing really memorable. sound scores an above average 6. **Overall** overall, afro samurai had Samuel L. Jackson and some pretty action scenes, but that's about it. everything else was pretty bad, and because of this i give it an enjoyment rating of 4, leading to a final score of 4.6 and a recommendation to go ahead and skip this one, unless you really have nothing better to do.

(I try to keep my reviews short and sweet and straight to the point without giving away spoilers with that said lets get this show on the road) 1\. Blood shed (There was basically blood and death everywhere) Like i dont understand if i see someone get cut down right in front of me i am running the hell away night towards) 2\. Action ( Total action samurai style and of course the can do lighting fast no one can see what they are doing type moves) 3\. Unique (A rap type of feel to this anime) Overall 16+ should watch this anime has a real adult, dont watch this while your guardian younger siblings is in the room kind of feel. It really is a good anime to watch if you like Samurai stuff.

Start a new discussion for Afro Samurai anime. Please be fair to others, for the full rules do refer to the Discussion Rules page.