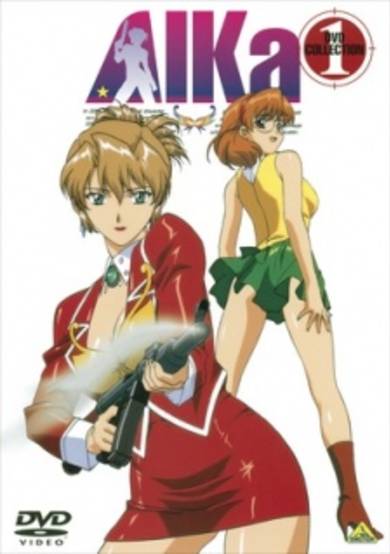 A catastrophic earthquake has left Tokyo, and most of the Earth for that matter, under the sea. Aika is a salvager who retrieves various remains from the watery ruins. When Aika accepts the dangerous mission of locating and obtaining the mysterious Lagu, she discovers that she's not the only one after it.
User Count2180
Favorites Count3
Start Date25th Apr 1997
Next ReleaseInvalid date
Popularity Rank3361
Rating Rank10114
Age RatingR
Age Rating GuideMild Nudity
SubtypeOVA
Statusfinished

A Flower Blooming in Space

Break the Decisive Battle! Delmo Base!

Oh my,how do I summarize Agent Aika? Most of the world has sunk into the ocean, andAika works as a salvager for a small deep sea salvage company. Aika also hasthe ability to turn into a superhuman being thanks to her bustier.The company is contacted to recover a dangerous artifact, leading Aika and herassistant Rion on a mission against an evil organization. That's the semblanceof a plot that this show has anyway. The real focus on this show is creativecamera angles which show off as many panties per scene as possible. And withthe clothing designs in this show, that's often quite a few.              Agent Aika was one of the many, manyOVAs of dubious quality that Central Park Media brought over in the late1990's. This was an era where most of the anime distributors were pumping outtons of low budget, schlock OVAs that they could get incredibly cheap. And thisone is no exception. As stated above, Aika wants to do one thing, and thatthing is show you as many panty shots as you could feasibly fit into a 7episode OVA by any means necessary. It features an exceptionally large cast offemale characters wearing skirts that are improbably short, and employs lots oflow angle camera shots. The ridiculous extremes that the show resorts to inorder to show off underwear can be quite amusing. Fight scenes are framed andshot in order to maximize the underwear glimpse potential, skirts seem tomagically get shorter when characters stand up, and dialogue scenes are shotwith the camera zoomed in at crotch level so you just get a glimpse of thecharacter's underwear. The show's dedication to underwear shots over all elseis something to behold, and at times it gets so ludicrous you can't help butlaugh.             The gleeful commitment to insaneamounts of fan service is rather funny, most of the time. As an action showabout secret agents and evil organizations, there are of course going to befight scenes of our heroic Aika fighting her way through hoards of henchmen.Thing is, all these henchmen are also women. And the fight scenes pull nopunches, so to speak. They are fairly vicious fist fights, and can get bloody. There'ssomething uncomfortable about seeing a bunch of women get beaten up, then flopover unconscious and flash their crotch to the camera.  There are multiple fights sequences perepisode, all of which involve large numbers of the henchmen getting beatendown, either by Aika or her companions, some of which are men. Some fightsinvolve character's clothes getting ripped off or destroyed, either thehenchmen's or Aika's. The show's attempts to titillate its audience, whilesimultaneously showing them some fairly brutal violence, is uncomfortable andcreepy. The violence seems out of place with the rest of the show, as fightscenes with some fairly realistic punches, kicks, and pain reactions do notmesh well with a show that is trying to show you panties every 30 seconds. Aika'stransformation sequences, which feature her clothing being removed by tentaclessprouting from her bustier, and often occur against Aika's will, are skeevy andcreepy as well. She is obviously in distress during them, and is powerless tostop it from happening. It's a very uncomfortable attempt by the show toprovide more nudity; the undertones and visual implications are far moredisturbing than they are titillating.             Agent Aika was dubbed by MercuryProductions and Skyhigh Productions, two New York based dubbing studios. NewYork dubs at the time were not known for their quality, and this show iscertainly no exception. The cast contains a roster of recognizable actors fromthe NY area. They all put in very stiff, inexpressive performances. Of note arethe two male leads in this show. One is Aika's rival/love interest, who soundslike he is attempting 6 different accents at once, and slurs most of his words.He also seems to have a dim grasp of what exactly emoting is, as he tends toshout most of his lines when upset, angry, or excited. The other is a young manwho joins the salvaging company midway through. I'm not sure if the characteris supposed to have some sort of mental handicap, or just be a sort of weirdcharacter who likes cross-dressing and talking through a doll.  (If the character is mentally disabled, thenthe portrayal is an extremely stereotyped and offensive one.) Either way, theperformance is absolutely abysmal. The women in the show are slightly betterthan the men, but for the most part remain stiff and inexpressive as well. Theoverall poor quality dubbing fits in with the rest of the show, as no amount ofgood dubbing could have made this good.             Aika is not unentertaining. Theludicrousness of the premise and execution, coupled with the abysmal dubbingcombine to make a show that is fun to watch and laugh at. I was never boredwhile watching this. The mixing of fan service with fight scenes can beuncomfortable, but the rest of the show's gleeful perversity are enough to makeup for it. Released first in the late '90s by CPM, the rescued in 2008 byBandai entertainment, the DVD's a fairly easy to find. It's the kind of showyou put on just to see how dumb it is, and have a laugh with some friends. Forgleefully stupid shows packed to the gills with fan service, you can't do muchbetter than this.

Start a new discussion for AIKa anime. Please be fair to others, for the full rules do refer to the Discussion Rules page.