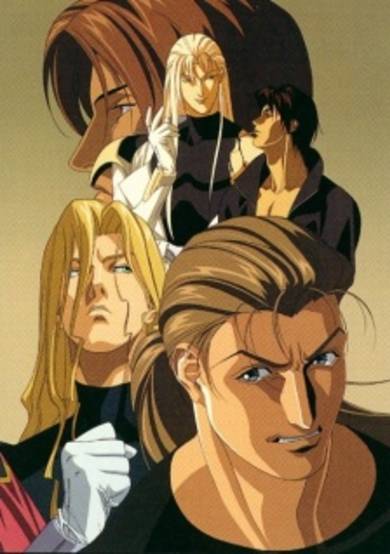 On planet Amoi, a great society has developed, creating a computerized city called Tanagura, ruled by supercomputer Jupiter. The populace is almost entirely male and is based on hair color; silver and/or blonds are the elitist, ending with dark/black haired as the bottom of society, often known as "mongrels". Blondies keep "pets", young boys kept for a few years, especially made for performing sexual actions for the Blondie's voyeurism entertainment. Blondies aren't suppose to keep pets for long or interact sexually with pets, but one blondie named Iason Mink has kept a pet named Riki, for years and is rumored to sleep with him. Iason refuses to let go of Riki, even with Jupiter's disapproval. Riki fights with his emotions and society problems, unable to decide what to do about his old friend/lover Gai (Guy) and their gang. Iason is obsessed with keeping Riki, and Riki doesn't know what to do; fight against him or surrender to him.
User Count1855
Favorites Count18
Start Date1st Aug 1992
Next ReleaseInvalid date
Popularity Rank3647
Rating Rank5565
Age RatingR
Age Rating GuideMild Nudity
SubtypeOVA
Statusfinished

All Ai no Kusabi released episodes

Not bad…not bad at all. It has a different story and the characters background are interesting. Leaves you in a blind stupor though since there aren't many episodes there are lots of unanswered questions.

I thought about this anime for weeks after watching it. My love for the story is not directly proportionate to the quality of the anime itself. It is a very superficial adaptation of a Reiko Yoshihara novel. Yes, a BL novel/anime but that is beside the point. I love sci-fi and sci-fi worlds and the planet Amoi has one of the darkest, most disturbing and most hopeless societies I have read about. It is so well constructed it feels tangible; what a shame the OVAs don't do much world building. Sometimes characters' motivations are unclear because no background information is given. Thankfully the complex characters still manage to carry the story through.  Maybe spoilers. Riki is the very embodiment of being stuck between a rock and a hard place - he escapes the slums, whose inhabitants have nothing to look forward to but an early death, only to be captured as Iason's pet (sex slave). In the years he spends with Riki, Iason gradually overcomes his essence of ruthless and aloof android in order to experience carnal love and struggle with some very human emotions. The ensuing events spiral into a finale that makes me drown in tears every time I watch it. Women are deliberately (largely) absent from this brutal world, as a comment on the state of sci-fi in the 80's. Allegedly.

Start a new discussion for Ai no Kusabi anime. Please be fair to others, for the full rules do refer to the Discussion Rules page.