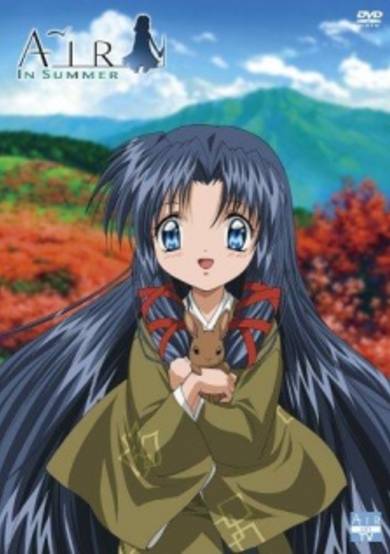 All Air in Summer released episodes

The events of the Summer arc are retold from the escape from the shrine to before the mountain. These events also include scenes not shown in the original Summer arc.

The relationship between Ryuuya and Kanna is explored more showing their bond to be more romantic than platonic in nature.

\[Old review is old.\] Behold what would come to be if Air had been adapted for a longer running time: A pointless side story riddled with sex jokes that has nothing to do with the themes that the show focused on. A bit harsh considering that the purpose of this extra OVA is to provide a better look at one of the segments from the anime, but keeping in mind how said segment had a complete, coherent arc that fit in cleverly with the thematic structure of the show to begin with, this special suddenly becomes useless. Air In Summer opens in the setting where Kanna and company are escaping pursuit of those who fear her supernatural traits, while searching for her mother who possesses the same supernatural abilities. While the iconic glowing white wings and the mother herself are completely absent, the OVA focuses on the downtime with Kanna, Ryuuya, and Ureha as they go about their travels. While this technically fills a complaint I had in Air about the lack of places to take a breather during the dynamic story, I would have liked it more if that time was also spent reinforcing the themes at play. Air In Summer ditches them for more comedic moments with the gang, building up innuendo jokes to close on an awkward note of exposing Kanna to more sexual stuff, and just watching Kanna practice with her oh-so hilarious and inspiring beanbags. The animation executes the comedic scenes as well as KyoAni usually did, I just hated the shallowness of it all. The only moment that felt important in the grand scheme of the OVA was Ryuuya’s backstory with his guardian, which could have tied into the parental concepts from the show. But since Air was strictly about the motherly side of parenting and family relationships (and since the OVA quickly swung back to those themes in the last minute) it seemed completely out of place. Production values haven’t strayed far from the show, with solid animation and a bit more polish than before, making the visuals easier to take in. Also carried over is the use of extra imagery to strengthen the impact of the subject matter. Little subjects like cicadas or ants reflecting the characters’ actions or thoughts were fun to follow. The more prominent bits of the soundtrack were absent, but we still have the great credit songs, reanimated at bits to fit the OVA material with even more subtle imagery. Production aside, there’s so little from this special to add to the entertainment from the root anime. If I had to use a commonplace phrase it would honestly be pure filler. So along with the sexual humor that literally comes out of nowhere, the forty minutes of tolerable comedy, down-time activities, and overstayed postponement of the big plot is pointless. Still, a bit of atmosphere and a little backstory doesn’t make it all bad. <u>Air In Summer (2005)</u>\: 4.6/10

Start a new discussion for Air in Summer anime. Please be fair to others, for the full rules do refer to the Discussion Rules page.