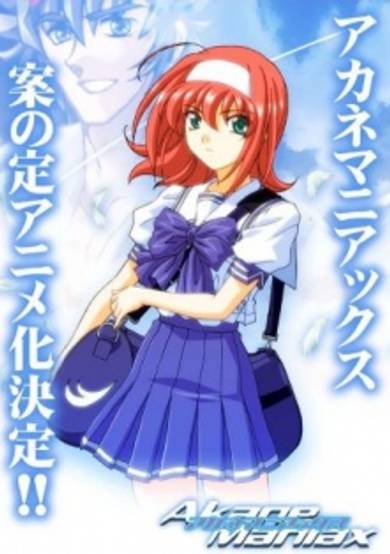 Jouji Gouda is a new transfer student at Hakuryo High. He fell in love at first sight and boldly proposed to Akane Suzumiya, representative of his class, on his first day at the new school. Although Akane finds him very annoying, hot-blooded and simple-minded Jouji never gives up and would do anything to express his love towards Akane.

Probably in an attempt to cash in on the success of KGNE ("Kimi ga Nozomu Eien"), this spin off was made. Not only was it sub par, but it was bad enough to pollute my fond memories of KGNE. It's an OVA that focuses on Akane's side story that runs in parallel to part of the KGNE main storyline. Cast your mind back to the first couple of episodes of KGNE: until the big twist of events at the end of episode 2, KGNE was pretty poor right? Well, even those two episodes pales in comparison to the pile of sh\*te that is "Akane Maniax". The first two episodes of KGNE can be best described as trashy romance laced with trashy comedy, Akane Maniax is probably best described as trashy comedy laced with trashy romance. Sounds similar, right? But what makes "Akane Maniax" so much harder to tolerate is that the comedy element is not only incredibly annoying, but also overwhelmingly in-your-face and impossible to ignore - kinda hard to ignore things like fricking giant mechas appearing out of no where. As for the romance... well, after the overpowering stench of trashy comedy, it's nearly impossible to take the it seriously.Was there anything aspect of this that was better than KGNE? I guess visually a case can be made. The art and more clean and crisp than the original, and the colours more vibrant, but then again, the abundance of SD (super deform) style animation really put me off. So there you have it - in three short episodes, "Akane Maniax" managed to do nothing other than cheapen the original series that it spun off from. If, like me, you loved KGNE, then for God's sake stay away from this grotesque spin-off - you'll thank me for it!

Start a new discussion for Akane Maniax anime. Please be fair to others, for the full rules do refer to the Discussion Rules page.