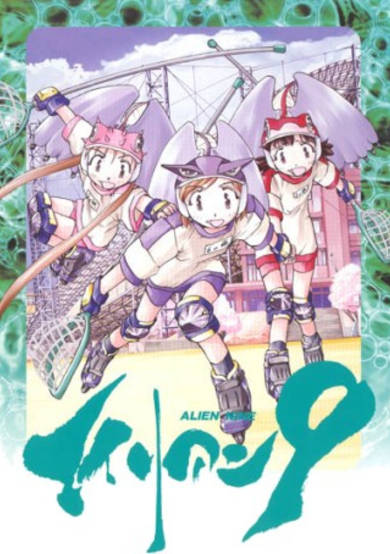 Yuri Ootani, a girl who has been afraid of aliens, has been chosen to be on the alien party with the class president Kumi Kawamura, whose only intention to join the alien party is to get out of presidential duties, as well as Kasumi Tomine who is perfect at everything she does, including fighting all the aliens that come in their way. But can they defeat a massive alien who has already abducted Kasumi?
User Count3070
Favorites Count35
Start Date25th Jun 2001
Next ReleaseInvalid date
Popularity Rank2779
Rating Rank6275
Age RatingR
Age Rating Guide17+ (violence & profanity)
SubtypeOVA
Statusfinished

The End of the Beginning

Alien Nine can be seen in the same vein as other "deconstruction" series, such as Evangelion and Madoka Magica. The show advertises a false image of what it truly is, making the viewer surprised when they dive in to find a far different experience than they were expecting. These types of series are refreshing and it's understandable why Madoka Magica and Neon Genesis Evangelion became popular, carrying a very similar style to Alien Nine. The main factor in the equation holding Alien Nine back from ascending with its siblings is that it was never completed in animation form. This OVA series serves as a well-done advertisement to the manga series, as it doesn't attempt to tell a full story before trying to persuade the viewer to move to the mangas for more. Alien Nine stops mid-story, and a huge amount of potential can be seen lost in the process. I won't be taking the manga series into account in this review as I haven't gotten to reading it yet. This review focuses solely on the animation side of the picture and what it has going for it. The visuals of Alien Nine are spectacular, and almost at a level of quality I would consider to be worthy of a feature-film status. There's a great amount of attention to character proportions as the style this anime set out for is rarely ever carried out a notch below the ideal level. There's some inclusion of cgi elements as well, yet I would consider these additions as some of the best cgi inclusions I've ever seen in any anime. Quite surprising when taking into account that this OVA series was released in 2001. An odd amount of high budget went into this peculiar piece of work, as the cgi fits perfectly along with the spectacular two-dimensional art. The direction is also fantastic with interesting angles and visual styles. While I doubt many would argue that the animation of Alien Nine is not too notable, the art style is another thing to consider. The art style is generally normal, with the characters being drawn with very curvy heads similar to more child-oriented shows, yet the ears of the characters are drawn with far more detail and scaled to a larger size. It's understandable that many people would be instantly turned off by this art style, but the more anime one sees along with many different art styles, the more one might become accepting to peculiar styles. This series would certainly require some acceptance of variety, some tolerance, and some will to see odd things since the story itself would also require such traits to be at all enjoyable. The setting of Alien Nine is questionable as to what it's comparing itself to, if anything at all. As Evangelion is easily comparable to mecha series and Madoka Magica is easily comparable to magical girl series, Alien Nine seems to sit in its own element. There wasn't any key element I noticed that directly made me feel that Alien Nine was deconstructing a certain genre or series type, but the opposing styles of it along with its developing, unorthodoxed weirdness made it still feel as though it was. The story would be more similar in presentation to Madoka Magica, as young girls are place in positions where they practically gain superpowers to fight off danger. However, soon the elements of Alien Nine morph into the extreme that would correlate better with that of Neon Genesis Evangelion. There are even some paralleling moments in both Alien Nine and Evangelion that those who seek out to view both will likely notice. Alien Nine begins as a school, superpower anime about school girls protecting their campus with gifted, super abilities. The main character is extremely shy and fragile, but is placed in a position where she will have to go into danger to fight off aliens from her school's campus. That's the introduction for the beginning, closely relating to the OVA's opening which likely intentionally gives the series a more innocent atmosphere to start out with. Even during these more conventional moments in the anime, the music and some visual cues foreshadow a coming change. The music in Alien Nine is unique and, although it may sound dry or lacking in budget at times, an intentional style slowly emerges that makes the whole audio experience memorable. The music will play in a way that is almost fitting to the starting presentation of what the anime is, yet there will always be an odd pitch and tone to it, almost like a record in a record player slowly shaking off-center. Alien Nine did extraordinarily well in its audio aspects for the style it carried out. Alien Nine is more of an experience than a story, and it should be noted that the experience is incomplete. This OVA series also serves more as an advertisement to the mangas by its chosen end-point as it's completely unsatisfying and in many ways not even able to be considered an ending at all. However, from the quality and intrigue found in Alien Nine, the series is one of the top that needs to either be remade or have a sequel made. For those who like mangas, they will likely deliver some of the experience, but the audio and the quality will be sorely missed when moving on. The characters and art style are claimed as annoying in many places I've visited, but if one remembers this is an experience, things may start to feel more fitting in due time. The characters are shallow for the most part, but stylistically so. The whole criticism to that would fall very close with those of the character Shinji in Evangelion. Depending on how people felt towards that character and story, those people will likely feel the same to what Alien Nine has to offer. Overall, Alien Nine is a memorable and entertaining OVA series even in its incomplete state.

Man what the hell do I even say about this one? This is an anime that works much more solidly on a thematic and symbolic level than it does on a basic plot level, with most of the actions and scenarios set up for meaning rather than for story. This isn't necessarily an inherently bad way to go about constructing a series, but it will absolutely put off any viewers that aren't prepared for this kind of narrative. Personally, this is the kind of anime that I've been craving for a lot as of late since I've been looking for shows that break the mold of what the current industry has become, so I found Alien Nine to be quite thrilling, but in a much more unnerving and unsettling way, which is another style that I've been craving a lot lately. Perhaps the ending of Berserk has finally broken me, but that's neither here nor there. This anime delves into a lot of themes relating to puberty and the general discomfort and fear of growing up, with some scenes being nice and subtle, and other quite literally bashing you over the head. While this might appear as having a sporadic and uneven tone to some, I think it actually fits the allegory for adolescence quite nicely. It's also a horror anime in the sense of what I mean when I talk about true horror, in that there is something outside of your control bearing down on you, digging into your weak points and dragging you through some truly dreadful experiences. In fact, I wouldn't be surprised if someone told me that Gen Urobuchi had seen this anime at some point and let some of its themes influence his work on Madoka Magica. This is purely a hypothetical conjecture obviously and I'm not in any way suggesting that Alien Nine had a direct influence on Madoka, but they do seem rather similar to me when it comes to the terrifying circumstances that both casts have to deal with. However, I do have to knock off a few points for almost wrapping up the ending nicely, but then throwing in a scene at the very end that leaves a gaping hole in the conclusion that desperately needs more content that will never be animated due to lack of popularity. Much like the story, the characters operate on a much more symbolic level than a logical one, and because there's a lot of implicit meaning behind their actions that isn't openly stated, a lot of what these characters do may come off as irrational and just plain stupid sometimes. I did find Yuri to be an excellent youth protagonist, though a tiny bit annoying sometimes, and watching her struggle with the aforementioned themes, and even just her daily school life, made the peak moments of terror all the more traumatic and unnerving. The animation is handled by J.C. Staff, and while I'm not gonna pretend that the animation holds of really well (this is an OVA from the early 2000s after all), I am surprised by how much detail went into both the environments and the alien designs. There's also a fluidity of movement that you don't see very often outside of the experimental OVA field and I wish I could see more often in regular TV anime, though I believe it would be more accurate to say that I wish there were more TV anime with darker, more emotional themes and experimental storytelling methods that can push the boundaries of what a visual medium can do. The character designs are fairly simple and do their job in creating unique and memorable characters, but the consistency does leave a lot to be desired. There's also some pretty nasty CG that pops up constantly, which put a big damper on some of the more important scenes. As for the soundtrack, I've noticed that a lot of the most striking soundtracks come from works that have less of a need to stick to a traditional classical or rock sound, and that is certainly the case with Kuniaki Haishima's work on this anime. There really isn't a selection of words or phrases that I could describe this soundtrack with other than bizarre, with a lot of different styles and sounds crashing together to create some extremely unsettling and agitating tunes, and I will definitely be coming back to this soundtrack in the near future. Overall, if you're not one to stray from traditional storytelling and dialogue, then you will probably have a lot of difficulties watching this anime, but if you're like me and feel that you can get suckered into this strange world, only to have your heart slump down awkwardly in your chest as the fear and anxiety wash over you, then give this one a try. I was a bit indecisive about what kind of rating I wanted to give this one, but then I remembered that I completely ignored my dinner just so that I could finish the series, so I guess I have my answer.

Start a new discussion for Alien 9 anime. Please be fair to others, for the full rules do refer to the Discussion Rules page.