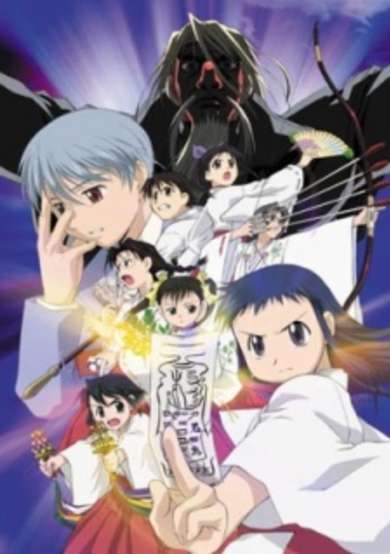 Since childhood, Tadahiro Amatsu has two different-colored eyes - one brown and one light hazel. But because of a dark secret behind his left eye, he's become a target for the masked sorcerer Ayatara Miramune and his band of demons. To combat the demons appearing all over town, Yuzu Hieda, a priestess in training, recruits four other girls from her high school. Under the supervision of Yuzu's elder sister Kurako, the five young priestesses must undergo months of training to master their abilities. (Source: ANN)

All Asagiri no Miko released episodes 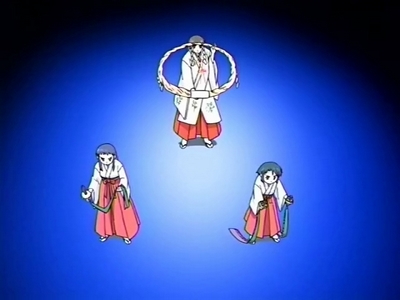 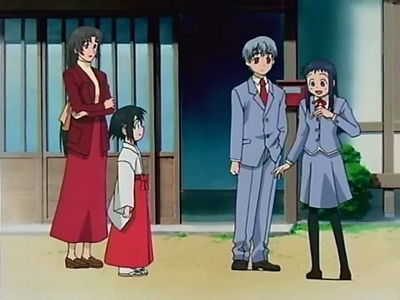 Trouble at the School Entrance Ceremony 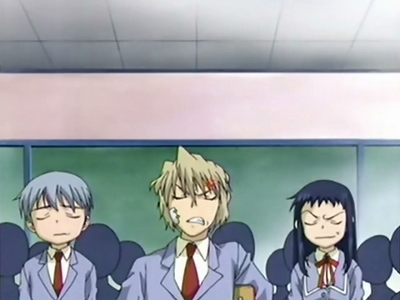 Formation of the Shrine Committee 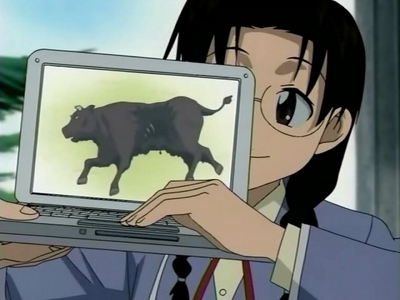 The Shrine Maiden Committee is Looking for Applica 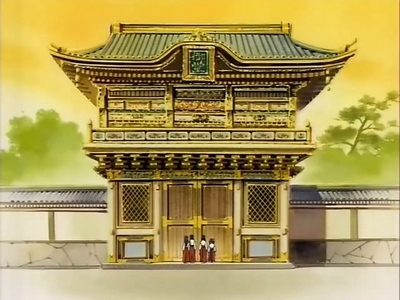 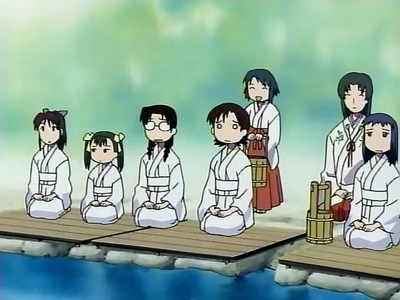 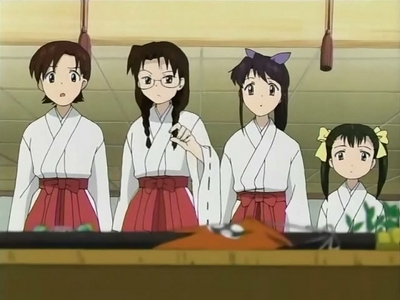 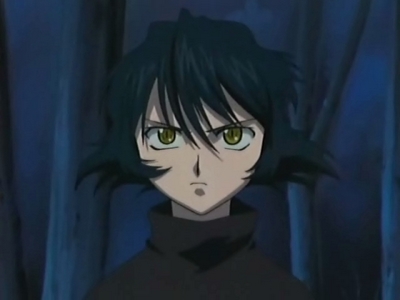 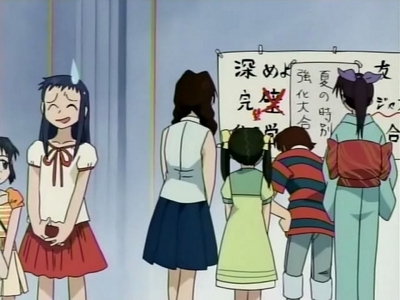 \*This review is archived and originally written back in 2012\* Critic's Log - Earthdate: November 13, 2012. Review #21: Shrine of the Morning Mist Intro...Intro... Intro... I am finding it difficult to come up with a intro for the review of this anime. I guess I'm going to have to undergo training for the mind. I guess some training would help me come up with fresh ideas for fitting intros to reviews of certain animes. I am now going to proceed in beginning my training... On second thought, I don't need it! In fact, this intro is completely pointless, Let's get right into Shrine of The Morning Mist! Since he was young, Tadahiro Amatsu has two different colored eyes - one brown and one light hazel (or is it red?). But, because of a shadowy secret behind his left eye, he's become the target for the masked sorcerer Ayatura Miramune and his band of demons. To battle the demons appearing all over town, Yuzu Heida, a priestess in training, recruits four other girls from her high school. Under the supervision of Yuzu's elder sister Kurako, the five young priestesses must undergo months of training to master their abilities. To be technical, this is a Chaos Project and Gansis production and I sure never heard of these two studios and I think it's because neither of these studios never made big hits and I am not sure about the current status of either of these studios but it wouldn't surprise me if these studios are no longer around. I will give them credit that the character designs are good for the most part and hey...the comedy isn't overblown! The animation however is ok in some areas but it almost barely moves from time to time. Some parts are fine, some even look embarrassingly bad. The animation is not absolutely terrible; it's sadly the only decent thing in this whole package because I have some issues to discuss about this anime. The music by Tsuneyoshi Saito  is not memorable and it’s not good at all. There are times when I think “Why does the music sound like it would belong on a Nintendo 64 game?”. Some songs were a bit overplayed and I really don’t have much to say about it except for the opening. The opening is sung by Megumi Hayashibara and the song was ok, but nothing too special. As far as voice acting goes, the Japanese cast is fine and it was kinda nice to hear Megumi Hayashibara voicing one of the characters (Kurako). The English dub surprisingly isn’t terrible but the cast is hit and miss on the dub. Alexa Zimmerman is in charge of the ADR direction in the dub, but she hardly ever did ADR direction before or since. However, there’s nothing really too special about either version. The Japanese version has better quality in voice acting than the dub but that’s just my opinion. The characters are not that hard to mention because most of the characters have variety in personality but they are mostly a bit one – dimensional.  The characters are alright I guess but I really find some of the characters boring and some of them cliché as well and the villains are also clichéd.  I really have not much to say about the characters here. The story on the other hand is what I had the biggest issue with. I was surprised that the episodes are about 12-13 minutes long but that is what did lead to some problems I had with this show. First of all, parts of the story are so cliché that it’s not funny. Secondly, these episodes feel rushed near the end of some of the episodes and it’s done more than one episode. Also, there are a couple episodes that have fan-service and go nowhere.  I sure hope some of the animes that Yuji Moriyama directed are better than this because I don’t think Moriyama-san did a good job directing this anime. I will give him credit that he didn’t overdo the comedy in this series Shrine of the Morning Mist is available from Media Blasters, the manga by Hiroko Ugawa was available by Tokyopop and it is out of print. With that said, Shrine of the Morning Mist is an anime that is generic and has some little comedic moments involved but it doesn’t have a story plausible enough to make it a good series, the plot is mediocre as well as the music. The characters are forgettable but the character designs are the only good thing in the series and that should not be the only good thing in an anime series. I give Shrine of the Morning Mist a 3.6 out of 10, it is WEAK! Leave a comment below and have a good day.

Start a new discussion for Asagiri no Miko anime. Please be fair to others, for the full rules do refer to the Discussion Rules page.