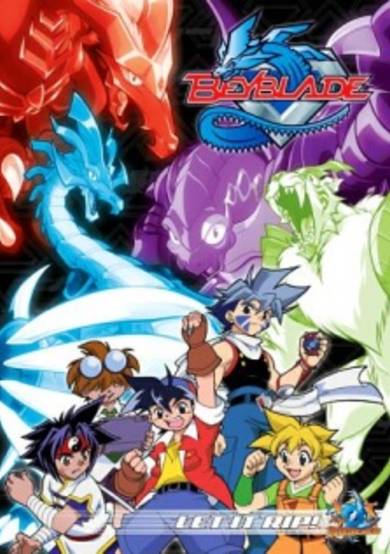 Thirteen-year-old Tyson Granger (Takao Kinomiya), along with his fellow teammates, Kai Hiwatari, Max Tate (Max Mizuhura), and Ray Kon (Rei Kon), strive to become the greatest Beybladers in the world. With the technical help of the team's resident genius, Kenny (Kyouju), and with the powerful strength of their BitBeasts, the Bladebreakers armed with their tops (AKA: Blades) attempt to reach their goal. (Source: ANN) 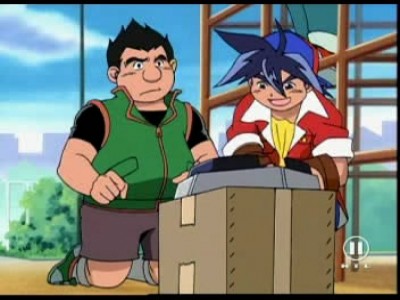 Tyson Granger realises he is running late for a Beyblade battle with Andrew, the best Beyblader in town. Before Tyson gets there, a Blade Shark named Carlos fights and defeats him, taking his blade. Tyson arrives and snaps, challenging him to a battle at 3:00 at the river next day. A boy named Kenny becomes friends with Tyson, and they crack that they need a faster Bey to defeat Carlos' heavier one. Tyson attempts, but gives up, and suddenly the Great Dragoon, a power that has been in the family from generations, comes to Tyson. Tyson again tries and finally defeats Carlos. However, Kai, the leader of the Blade Sharks, arrives and Tyson challenges him to a battle. 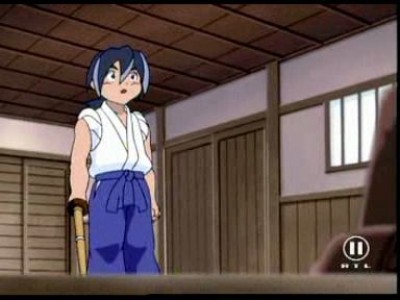 Day of the Dragoon

Tyson quickly loses his battle with Kai. Andrew and Kenny inform him that the Blade Sharks are looking for the ultimate Bit Beast nobody can beat. Andrew, Kenny and Tyson rebuild Tyson's Bey. Meanwhile, Kai then orders Carlos' Bey be destroyed. Kai's goons kidnap Kenny to use his laptop to find the ultimate Bey. Tyson asks the Dragoon for guidance when Dragoon goes right into his Bey. Tyson then re-challenges Kai, and they draw. 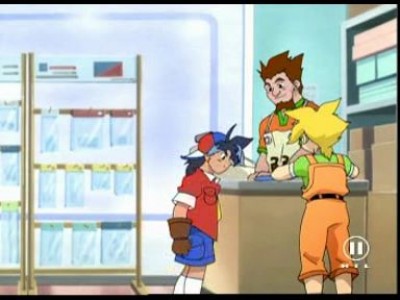 Take it to the Max!

Tyson and Kenny meet Max, the new kid in town, just before a puppy is washed away to a waterfall. Tyson attempts to save him, but fails. Max then tries, and succeeds. Max and Tyson battle in Max's dad's shop, but Max wins, due to his defensive-type Beyblade. Stanley A Dickenson (the Chairman of the Beyblade Battle Association) then arrives and informs them of the Beyblade Battle Tournament, and they are all looking forward to it. Kenny and Tyson argue over Tyson's cockiness that his Bey need not be improved. Tyson then attempts to control the Dragoon, and succeeds, while Kenny is watching through the window. They then become friends again. 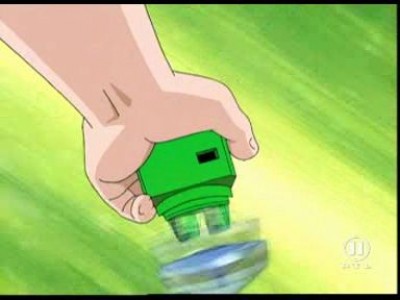 The Beyblade Regional Qualifying Tournament begins as Tyson, Max, and even Kenny enter to see if they can dethrone Kai, the reigning champion. Max wins his Block, and advances to the finals. Kenny is second but without a Bit Beast in his blade, he falls quickly to Kai, angering Tyson. Tyson battles third, against the 3 goons that captured Kenny, and Carlos. Carlos then destroys one of his partners' Beys, leaving it between Tyson and Carlos. Tyson ends up winning, and is a good sport to Carlos. Ray is introduced at the end of the episode. 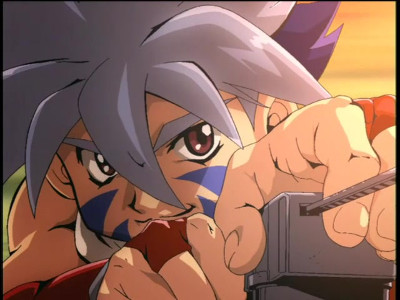 In the semifinals, Max goes up against Kai, the champion. Tyson looks forward to fighting Ray, an undefeated Blader. The dish is based like a tower, to stay in the top for 10 seconds is how you win. The first round goes quickly, with Max being defeated by Kai's Spin Fire attack. But in the second round, with Max's reverse launch, Kai's Spin Fire attack is absorbed by Max's Bey, and he wins. Max's Bey then explodes due to the energy overload. Max then finds a Bit Beast inside his Grandma's pendant, and his Bit Beast, Draciel, gets inside his Bey. Max and Kai fight fiercely, but Max loses. Tyson cheers Max up with the fact that he now has a Bit Beast, and he can't wait for his battle with Ray. 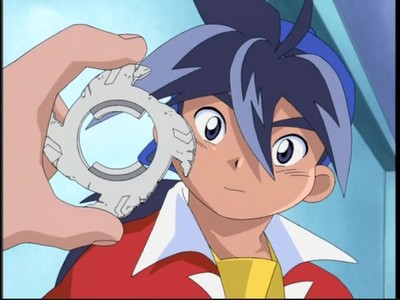 The final battle of the semifinals is Tyson versus Ray, an undefeated Blader. Kenny is working on something, and is not there for the first round. Tyson and Ray clash, but Ray easily beats Tyson with his stronger Bit Beast, Driger and his Tiger Claw attack, destroying Tyson's Bey. Kenny shows up before he forfeits, and Tyson's Bey is fixed with a new Defense Ring Kenny was working on. The second round is ferocious, but Tyson's Defense Ring pulls through, despite not being built for attacking. Ray forfeits the third match, saying he has nothing left to prove, and joins the team. The finals are decided, Tyson versus Kai. 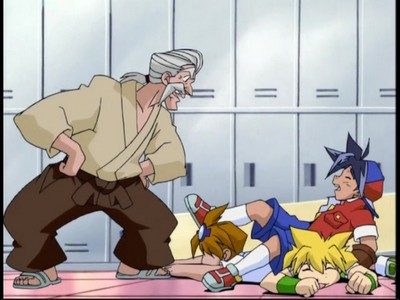 Tyson, Max and Kenny are working on Dragoon to ensure victory in the finals when Grandpa interrupts and reveals Tyson that it is his 13th birthday! After the party, the first round ends quickly, with Tyson unexpectedly defeating Kai. Kai then goes harder on Tyson and easily defeats him in the second round. The third round is explosive, with Tyson just managing to defeat Kai, and become the National Beyblade Champion. Mr Dickenson then reveals to Tyson, Kai, Max, Kenny and Ray that they will become a team and participate in the World Championships. 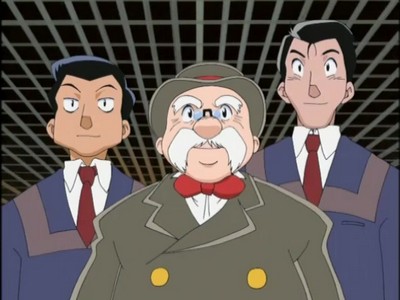 Bladin' in the Streets

As Tyson, Kai, Max, Kenny and Ray fly to Hong Kong to prepare for the Asian Tournament, Kai "quits" the team and walks into the streets. The rest of the team try to follow him and fail when they hear a Bey spinning, and find a back-alley Beyblader challenging them to a battle. Tyson battles and manages to just defeat him, when another Beyblade knocks Dragoon out of the stadium and nearly hits Ray (Kai then reappears and knocks Dragoon out of his way), belonging to a boy named Kevin. 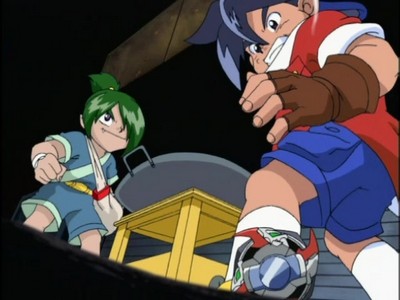 Kevin disses the BladeBreakers (especially Ray) and challenges Ray to a battle. Tyson has had enough and battles Kevin instead, but he falls quickly to the Bey's ability to wobble and multiply. The Blader who challenged Tyson beforehand bumps into Lee, Gary and Mariah, the other members of the White Tigers, and he tells them about his encounter with Ray. Tyson then beats Kevin in battle, before the rest of the White Tigers show up. They all seem to know Ray, calling him "traitor", and tell him that they will be entering the tournament too. 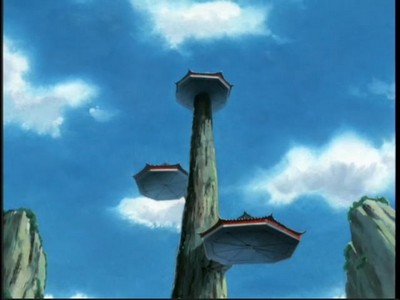 Battle in the Sky

The BBA Asian Tournament is underway, at the peak of a unbelievably high tower in China. The BladeBreakers and the White Tigers realize that they will eventually battle each other, and they use this against each other. First up, the BladeBreakers versus the Tall Boys. The BladeBreakers manage to scrape through to the next round, despite some of the Tall Boys' Beys having spikes and being able to generate heat. They then check out Mariah's Gallux Bit Beast, from the White Tigers, and Tyson can't wait for their fight.

Start a new discussion for Bakuten Shoot Beyblade anime. Please be fair to others, for the full rules do refer to the Discussion Rules page.