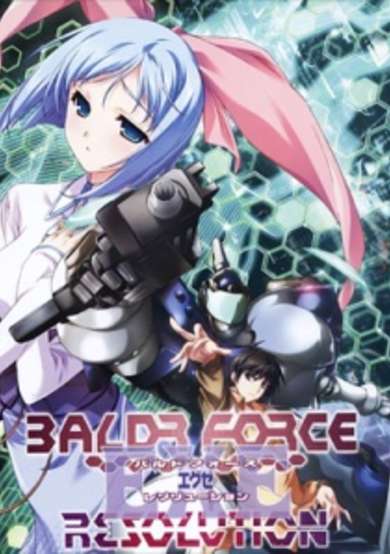 Any network runs all over the world, and the development of the information network reaches its acme. In this age, there are two developed worlds; "the real world" and "wired", or the virtual network world. Soma Toru belongs to a hacking group, Steppen Wolf, which runs around the network world freely. They attack the database of the UN forces as their last work. During this attack, he loses Nonomura Yuya, his friend as well as the team leader. Toru is arrested by the army. In exchange for letting him free, he has to work for an anti-hacker organization, the first squad of the UN Security Force Information Administration Bureau. Working for them, he is looking for the person who killed his friend, while the other members also have their own reason to fight. The three-way fights of the terrorist group, the security enterprise, and the army, continue every day. The various events occurred during the fight seem to be independent of each other at the first glance, but they're converging on one event as if they were attracted by something. Based on the game by GIGA. (Source: ANN)
User Count1675
Favorites Count2
Start Date10th Nov 2006
Next ReleaseInvalid date
Popularity Rank3820
Rating Rank8905
Age RatingR
Age Rating GuideMild Nudity
SubtypeOVA
Statusfinished

Souma Toru, once a fearless hacker, is forced to join the ranks of FLAK. Indentured into service and out for revenge, the young man reflects on the dead of the past as a ghost takes shape in the present.

A joint exercise between VSS and FLAK goes horribly wrong. Toru's hunt for Yuuya's killer is interrupted by an encounter with a strange little girl named Ren.

Toru's life is in chaos after the discovery of who killed his best friend and the sudden disbanding of his platoon. Complicating matters, strange Ren has become the target of a furious manhunt.

The Wired Ghost is crashing the entire system. Some wish to destroy the threat. Some hope to capture and exploit the menace. Toru knows that he must free the abomination once and for all.

Story: 8/10The story isn't very original, but it does keep you entertained and just a warning, your head might explode after watching this. It follows a young hacker named Souma Toru, who is a hacker for Steppen Wolf, a hacker group. When Steppen Wolf is disbanded and he is taken into custody, Souma Toru is forced to join FLAK or else face prison... from there, he meets a girl who calls him "big brother", a hacker-terrorist group and the VSS... I won't spoil any details beyond that.Art/Animation: 9/10Animated by the studio that brought you Macross Frontier, Sousei no Aquarion and Noein, BALDR FORCE EXE Resolution is animated by the studio Satelight. It's pretty much a bunch of mecha/robots running a muk in the cyberspace and they look alright and a tad generic. The 2D animation is very nice, solid and gorgeous. Sound: 9/10If you are a fan of KOTOKO, like me, you will know she is the singer of the OP. The OP is absolutely gorgeous. The ED is also very nice, but pales in comparison to the OP, "Face of Fact". The BGM is very nice as well, a tad generic.Character: 8/10The characters weren't very remarkable, however Ren was my favorite. Ren was my favorite character... watch to see why. Souma Toru was the typical guy with a burden and bone to pick, similar to sCRYed's Kazuma and other stereotypical shounen males. I think in the overall sense, the secondary cast was just so much more fun to watch. Enjoyment: 10/10I really enjoyed it. For only 4 episodes, it was nice, violent and entertaining. If you got time to kill, give BALDR a chance. I enjoyed the thrill and suspense of the OVA as well. I also feel it has high rewatchability, which is fairly rare to me. If you like mecha series, this should be a priority. Just give'r a shot!Overall, BALDR FORCE EXE Resolution, 9/10.

BALDR FORCE EXE Resolution is one of the those fantastic OVA series that is severely overlooked by the vast amount of people who watch anime. It has wonderful art, a decent storyline, and good characters.STORY:The series is about a man, Tooru, who has lost everything (won't spoil ;p) and joins up with a kind of team, or company, called FLAK. The series is set in a would-be Japan, where the "wired world" is part of everyday life. People are able to literally plug themselves into certain computers and spend time in this new cyber world. It is quite a difficult concept for the writers of this OVA to get across well in such a small amount of time, but they do it brilliantly.ART:Nothing to complain about here: the characters are drawn very well, the backgrounds are fantastic, and the Mecha and Wired World, which are usually done by CG, are fantastic.SOUND:The music was absolutely incredible. KOTOKO sings the opening theme and the lyrics fit so well with the series, and Mami Kawada sings the ending, which is beautiful but sad at the same time. Luckily for me, these two are actually my favourite singers.CHARACTER:The characters in the OVA could have done with a lot more development, excluding Tooru, but since the series was so short character development was kind of out of the question. However, each character is still able to be unique.ENJOYMENT:Except for the events of episode 2, I really enjoyed watching this series, as it was such an experience to watch. For an OVA, it went far deeper than I would have imagined and OVA could.OVERALL:I was so close to giving BALDR FORCE EXE Resolution a 10/10, but episode 2 really put me off - I thought it was unneeded. However, I reccommend this to everybody ^^

I never actually finished this anime, so I'm going to keep this short and not in my usual style. It looks interesting enough, but brings in rape suddenly, violently and graphically (no genital are shown, but it's still graphic). Dropped in the second episode for this. If you can stomach it though, it may turn out to be a good anime, I wouldn't know since (as I mentioned) I never finished it.

Start a new discussion for Baldr Force Exe Resolution anime. Please be fair to others, for the full rules do refer to the Discussion Rules page.