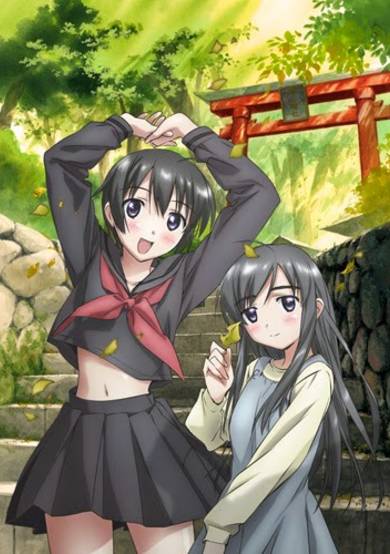 The Yamada sisters, Kyou (15) and Asu (9), are students studying in secondary and primary schools respectively. Their mother passed away and their father ran away after incurring gambling debts. Despite the difficult circumstances, both of them decide to overcome the unhappiness and welcome their days with enthusiasm and pride. Fortunately, with the change in the law system several years ago, Kyou is able to study and simultaneously take temporary jobs (such as distributing newspapers and tutoring) to make ends meet. On the other hand, Asu takes charge of household chores, prepares meals, and manages the finances to assist her older sister. Surrounding them are also good and kind neighbors such as the novelist, Saegusa-san, and the aunt at the public bath who watch over them. Although life is difficult and at times painful, the sisters are happy to have each other. (Source: ANN)

A Day with the Owner, his Sickness, and the Watermelon

A Day of Carrots, Lies, and the Rich Sisters

A Day of Perfume, Asu, and Open House

A Day of the Apartment, Sakura Trees, and Moving

A Day of Loneliness, Silver and Onee-sama

A Day of Jealousy, Chocolates and Valentine

A Day of Guitars, Dreams and A Music Teacher

A Day of Emotions, Uneasiness and Cell Phones

A Day of Colds, Promises and Mother

Binbou Shimai Monogatari is a very good, sutible for all anime.Story:The story more or less, in every episode, the sisters encountering a problem, trying their very best to overcome it. The only problem is is that it happens every episode.Animation:The characters were drawn very well.Sound:The background music was very heartwarming and appropriate for the very sweet series. The opening and ending had a nice upbeat tune to them, the lyrics also were very meaningful.Character:There were only really ever two entire characters in the anime but you feel for Kyo and Asu alot, you can feel what they are going through.Enjoyment:The anime was very enjoyable to watch because you're thinking abut how the sisters are going to combat a problem.Overall:This was a very heartwarming piece and a unique anime. Everything about the anime was above average.I loved this anime and I hope to see many more like it.

Start a new discussion for Binbou Shimai Monogatari anime. Please be fair to others, for the full rules do refer to the Discussion Rules page.