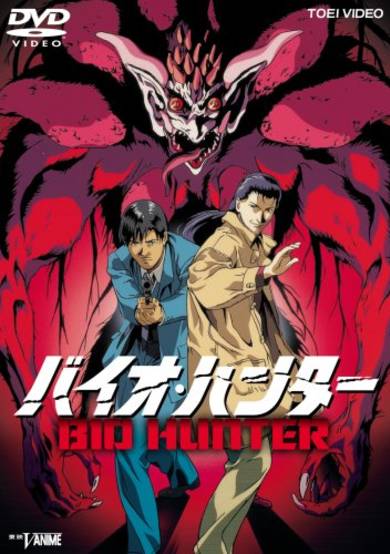 Two scientists are attempting to distribute the cure for a demon virus that is affecting people all over Japan, however, things have become complicated. One of them has become infected. So begins his battle with himself, as he attempts to not only control his emerging demon side, but also to save the lives of others by wielding its great strength.

Bio Hunter is an interesting twist of John Carpenter's "The Thing" and "Ghost Busters", starring Akuma, and it really works out well for itself. This was a surprise turnout when considering the mean score of 6/10. I say, don't be fooled, Bio Hunter is nothing to pass up. It's one of the best examples of Madhouse's creativity working wonders in the past, and a reminder to why they are one of the best studios around. Starting with the sights and sounds, Bio Hunter doesn't wimp-out. For sub-HD video, the entirety of the screen looks crisp with great color-depth and some nice grain. It fooled me, while I was watching it, that it was in high definition. In reality it was only 480p, and that really shows something on the technical side of things. The art style itself is vaguely similar to "Samurai Champloo" with a bit of a sensation of realism mixed in. The animation is wonderful and the proportion-work to the characters is near-perfect. For a typical setting, there are plenty of detailed backgrounds and views that are pleasing to see and make the environment even more immersive. The art design is the more impressive aspect to be found, mainly in the detail and the design of the fictitious element at work here. Also, I'm happy to report that the english dubbing in Bio Hunter is one of the best I've listened to. There was no standout bad voice-actor, and the recording material was also very high quality. The sound design, in general, is also striking with a consistent sense of depth and with the great electronic soundtrack it carries. While the electronics are well done, the soundtrack also features some choir vocalized-tracks. The entire soundtrack summarizes with an ominous sensation that really fits the atmosphere and the premise. The budget is masterful in this OVA. The story and the writing is also noteworthy in its varied uniqueness. Without spoiling too much, the story is about two individuals who secretly work a job that involves them mending possessed humans. The setup is what will end up relating more to "The Thing", while the writing and career aspect is what relates more to "Ghost Busters". In the anime world, however, how Bio Hunter goes about both of those aspects is quite unique. Bio Hunter almost feels like an early-90's Hollywood movie that could've done well in theater's if it was in live-action (of course it would need a longer length as-well). The writing gives the two main characters some interesting personalities that make them very different in a line of anime characters. Koshigaya is similar to Bill Murray in "Ghost Busters" in how he won't take his job too seriously and will have a continually satirical attitude. His friend Komada, on the other hand, is forced to take things more seriously due to his situation, yet has a more respectful, accepting, and shy personality. These characters work well together in creating some dynamic conversation, and the situation they're in aids in keeping interest. Describing that situation might ruin a bit of the experience, which I wouldn't want to do. So, I can say that it may not look too original when placed aside many other possession-combating anime, but the characterizations and the slight infectious facet does bring about a noticeable change to the formula. Even so, I couldn't say that what's being dealt with in that aspect is explained thoroughly in this OVA. However, it's treated thoughtfully by the characters and it ends up making it very forgivable even though I was never bothered by it. Bio Hunter carries a moderately-western directing-style, and pushes through with an interesting story relating to a career in searching out demons. The visuals and sound are done superbly with good treatment to virtually every aspect. The english dub is a notable part of that as it's certainly one that would be hard to knock on. The characters are all well-done with uncommon personalities done by the considerably clever writing. Character interactions are many times riveting, and the direction is masterful at creating many moments that feel genuinely creepy. Many live-action horrors fail to reach the height of some of the creepier moments in this OVA. I recommend Bio Hunter to everyone as it's not old enough to have a "dated" art style and it's not lacking in any aspect. There's even a pinch of romance to settle those who are die-hards for it. Watch Bio Hunter. P.S. Bio Hunter has embarked on a new quest of anime mustaches, and I'm in full support.

Start a new discussion for Bio Hunter anime. Please be fair to others, for the full rules do refer to the Discussion Rules page.