Tsukino Usagi is a 14-year-old girl in junior high. She's ditzy, whiny, and a crybaby. She often flunks her tests, and she is always scolded by her family. However after a bad day, Usagi is surprised to encounter a black cat that can talk! The cat, Luna, grants Usagi the power to transform into Sailor Moon, a fighter who is to save the world against the Dark Kingdom and its evil ruler, Queen Beryl. Of course, Usagi can't do it alone, and there are others who will help her on the way... 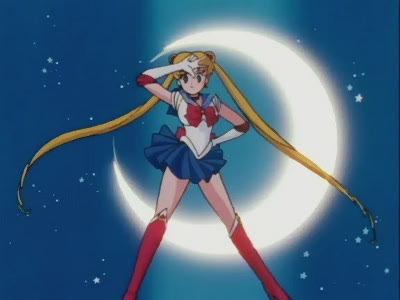 The show opens with Usagi Tsukino waking up late for school. On her way, she saves a mysterious black cat with a "crescent shaped bald spot" on its forehead. During school, Usagi and her classmates talk about Sailor V, a mysterious warrior. After school, Usagi goes to her best friend's mother's jewelry store, which is having a big sale. However, the sale is being used as a plan to steal energy for the evil Queen Beryl. 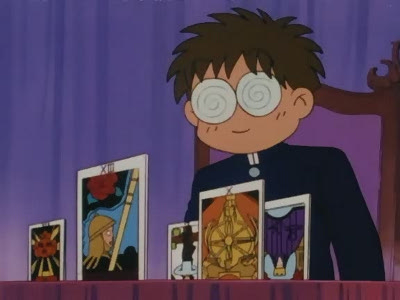 Punishment Awaits: the House of Fortune is the Monster Mansion

In the Juuban area, fortune tellers are the new craze. Naru suggest that Umino seek out a fortune teller after his true feelings for Usagi are revealed to her. Unfortunately, Umino and other teenagers are possessed by an evil fortune teller sent from the Dark Kingdom. Usagi, on the other hand, meets an old fortune teller, who reveals to her that someone she sees everyday has feelings for her. She begins to suspect that it is Motoki, a worker at Crown Game Center, because she has feelings for him. After an encounter with Motoki, Usagi bumps into an angered Mamoru Chiba, again. The next day, Umino shows up to school and begins to act very crudely. However, he is not the only one acting strangely... 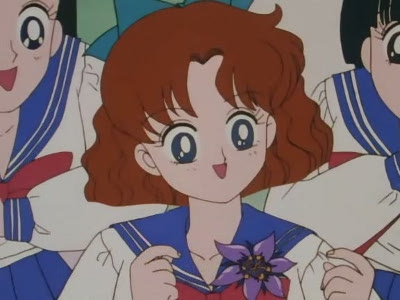 The Mysterious Sleeping Sickness: Protect the Girls in Love

Sending in a love letter to the new radio talk show, "Midnight Zero" and having it read on air allows you to receive a very special gift. The gift is not all it seems though. First, Usagi's teacher, Miss Haruna, receives a flower and goes into a coma-like state. Then, the same thing happens to Usagi's best friend, Naru. It doesn't take long for Luna and Usagi's suspicions to rise. The two go to the radio station to investigate, but the receptionist at FM No. 10 claims the show does not exist. 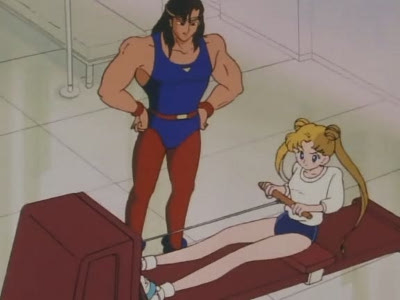 Learn How to be Skinny from Usagi

Usagi becomes obsessed with her weight when she gains a few pounds. After seeing how much weight Miss Haruna has lots, Usagi and her friends sign up for a health club. Unfortunately, the health club was started by Jadeite as a ploy to drain people's energy. In the basement Usagi discovers Jadeite's plan. 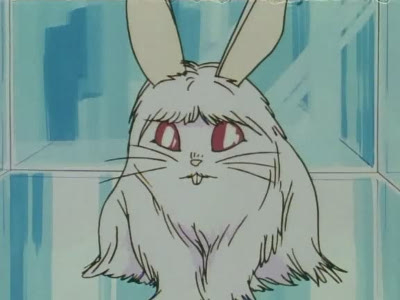 Scent of a Monster: Chanela Will Steal Your Love

Shingo is deathly afraid of cats, and when Usagi tries to get Luna accepted into the family, Shingo objects. Shingo, instead, goes to a pet store and buys a chanela, along with many of his friends. However, the chanelas are tools of another evil operation of the Dark Kingdom, and they are being used to drain energy from the owners. 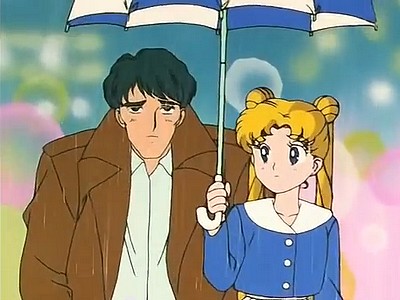 On her way to the arcade, Usagi runs into a young musician. Yusuke, the musician, was being chased by one of Jadeite's monsters because of a tape he accidentally got a hold of. The tape is Jadeite's newest plan to collect energy. Usagi and Luna sense something is wrong with Yusuke, so Usagi uses the Luna Pen and becomes a cool grown-up musician to sneak into the club Yusuke is performing at. 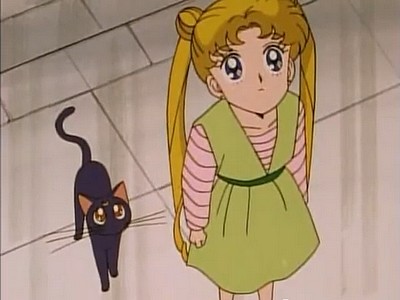 Usagi Learns Her Lesson: Becoming a Star is Hard Work

After seeing a poster of singer Mikan, Usagi and Naru think they can become superstars. But after a bad rehearsal together, the girls split up. Naru decides to dress Umino up as a girl and work with him and Usagi tries to work with Luna. At this time, a monster from Jadeite freezes Mikan and takes her place. The monster leads a crowd of Mikan's admirers onto a stage, where it steals their energy. 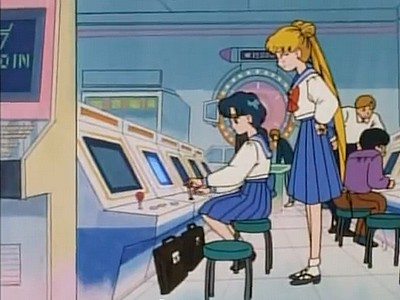 The Girl Genius Is a Monster: The Brainwashing Cram School of Horror

Luna becomes suspicious of the new girl in school, Ami Mizuno. Usagi also joins in on the suspicion when they find a brain-washing program on a disk that Ami leaves behind as she rushes to cram school. Usagi enters the school by disguising herself as a doctor with the Luna Pen. After transforming into Sailor Moon, Usagi realizes the cram school teacher is the monster, not Ami. The monster tries to steal Ami's energy, but a symbol appears on her forehead... 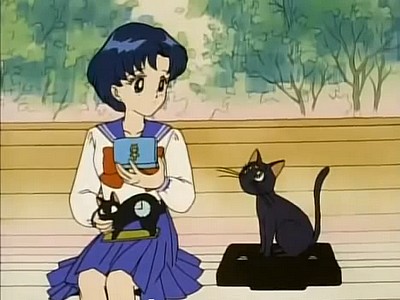 Usagi’s Disaster: Beware of the Clock of Confusion

Jadeite's new plan to collect energy is set up in a clock shop; the clocks sold make people rush around at a frantic pace. Luna becomes suspicious of the clocks and informs Ami, who uses her new mini-supercomputer to discover the new evil plot. Ami and Luna tell Usagi, who has been affected by the clocks, what is happening and they go back to the shop to fight the monster. Sailor Moon and Sailor Mercury follow the monster into another dimension. Using her new VR goggles, Sailor Mercury finds the hiding monster. However, the two warriors become trapped by the monster. 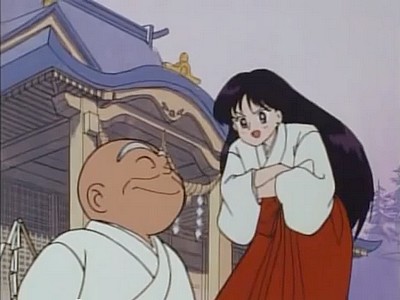 The Cursed Bus: Enter Mars, the Guardian of Fire

Usagi and Ami visit a Shinto shrine after hearing rumors of a cursed 6 o'clock bus. The disappearances of young girls who take the bus are being aimed at the shrine. However, the priestess at the shrine believes that the new helper is the source of the evil. Disguising herself as a bus attendant, Usagi is forced by Luna to go on the bus to see if the rumors are true. Usagi and the bus are transported to another dimension, while Ami is left behind. When Rei, the Shinto priestess, confronts the new helper, Jadeite in disguise, she is also thrown into the other dimension.

Like many people, Sailor Moon is the very first anime I ever watched. I bought all the DVDs when I was 6, and I've loved it ever since. It will always hold a very special place in my heart. And because of Sailor Moon, I continued to love anime ever since. The story is very original and I love all of the characters. Although it has many tropes, what anime doesn't? If you have yet to watch Sailor Moon, I recommend you do so, especially before watching the newly remastered version.

Like many people, I watched Sailor Moon back in the days when we could multitask like crazy, playing with our toys and inventing doll roles as we absorbed something that was on TV. Okay, sometimes we simply stood there with eyes on screen for hours, and that was one of our greatest pleasures, aside from playing outside and our sacred video games. Anyway, that's all in the past now. As a nostalgic series (that I remember too little for how much of it I've watched throughout my childhood) I decided to watch re-watch the Sailor Moon series. Hence my humble review: **\[7\] Story** Above all I think that Sailor Moon has a good story. It takes something that we usually ignore about ourselves -- our energy, in the spiritual and psychological senses -- and show us how easy it is for a misanthrope to steal it away from us. Situations are realistic, but problem solving in the world of Sailor Moon is entirely fantastic, and extremely focused on love and other human feelings. It can be very repetitive and a slowpoke but I'd say that pattern is needed in order to allow the characteristics of its world to impenetrate in the watcher. At some point you are so accustomed to pink buildings and colorful skies that it becomes natural, somehow. In the end you get to live through the story with interest and curiosity. However, there are various moments that are very cliché, but perhaps not for a child, though. This series really has much to do with the target audience... but pretty much anybody can relate to it, since there are so many different people showing up with completely different personalities, ambitions and hobbies. But well, I guess this has more to do with the characters than the story itself, but everything's related, so... to hell with that. **\[7\] Animation** An interesting part of Sailor Moon that goes very well with the story and everything else. You get that early 90s look, but even in 2015 you will see a world that exists independent of time and general setting. I'd say it's the ability to 'get inside' an invented world through pictures or animations that will let you see this better. Although technically issued sometimes, it's the sum of a culture that reflects the impact of globalization, but keeps close the traditional aesthetics and values. **\[5\] Sound** I do love the spirit of karaoke and I do respect how girls love romance, but to me there wasn't much more than that... There *is* potential and I amused myself many times, but in the end it didn't move me. **\[7\] Character** Although there are similarities between many characters, each of them remains itself as the story progresses. Sexuality is approached open-mindedly and I think that's kind of important in educating the young. Sailor Moon really acts as educator, except for a few relevant flaws, like Usagi and Mamoru's age difference, even though I go against that. If they were predestined to love each other, I really think an age difference like theirs (4, maybe 5 years?) would be no problem if you considered a different society. We don't know much about Moon Kingdom or when Usagi and Mamoru really began a relationship, it's not too bad that they are actually in love and going to start a relationship despite their age difference. I believe Mamoru can wait, he's a good lad. **\[7\] Enjoyment** Yeah, I did enjoy myself! Didn't actually expect as much as it turned out to be. I do acknowledge the clichés and flaws. Of course it's not a perfect series, and of course Shoujo anime tend to be extremely limited; but truth is, if you allow yourself into its world, you will see many beautiful and warming things that are missing in your life, and you will probably cherish them heavily from then on. I was sad that the sailor with the same MBTI personality type as me wouldn't appear just yet, but I was really happy when she did! If you want to get a hold of what I'm saying, please wait for my review on Bishoujo Senshi Sailor Moon: S. **\[6\] Overall** Although the odds pointed me to an overall score of 6.6, I lowered it to 6. The storyline gets better in the following seasons, and better characters show up. My standards on Sailor Moon kind of went up by then. I will defend this season by saying that it needed to introduce us to all sorts of new main characters, objects and villains, also the concept of it all needed time to get in for certain people. Even though I'd like it faster and smarter, I'm ok with what it turned out to be. And, I really think there's a bigger message behind the story. I see many important but not-so-obvious issues being approached in a more fantastic approach, so that we can actually meet them at a distance. This most certainly hasn't been intended, but still, if that creates one effect in the end, it can be considered something valuable. I liked it because it made me feel okay, and because everything is so harder in reality, but it is our perception of things that allows the biggest deeds to happen.

Start a new discussion for Bishoujo Senshi Sailor Moon anime. Please be fair to others, for the full rules do refer to the Discussion Rules page.