The season is divided into two arcs: One arc being an anime filler (to give Takeuchi Naoko time to make the next manga), and the other arc being the actual Black Moon plot. The first arc shows Usagi and Co. having their memories restored from the first season. Their enemies are a pair of aliens, Ail and Ann, who are seeking human energy to restore their life tree. Mamoru had yet to recover his memories and he appeared as the Moonlight Knight rather than Tuxedo Kamen. This arc only lasted for 13 episodes. The second arc introduces Chibi-Usa, a little girl from the future who is searching for the Silver Crystal. The new enemies are the Black Moon Clan, comprising of the Ayakashi sisters (Cooan, Beruche, Karaberas, and Petz), Rubeus, Safir, Esmeraude, Prince Demando, and Wiseman. They too want the Silver Crystal so that they can take over the future. The Sailor Senshi's adventure continues... 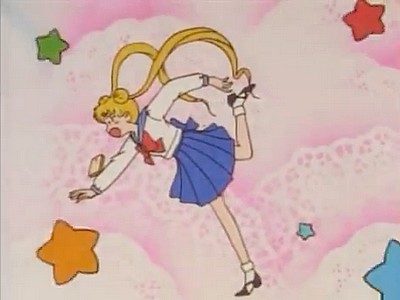 Two months after the final battle against Queen Beryl, a mysterious meteorite crashes near the Tsukino household. The next day, two students transfer into Usagi's school, Seijuro and Natsumi. They are really Ali and En, two aliens that arrived in the meteorite crash. Although they pretend to be siblings while at school, they are really lovers. They quickly grow jealous of each other as Ali falls for Usagi and En falls for Mamoru. They need life energy to feed their Doom Tree so they create a monster to steal energy from humans. After Luna and Artemis realized that they can't handle the cardian by themselves, Luna restores Usagi's memories, and she becomes Sailor moon once again. Although she defeats the monster, Usagi regrets regaining her memories because neither Mamoru nor the other girls remember their past together. 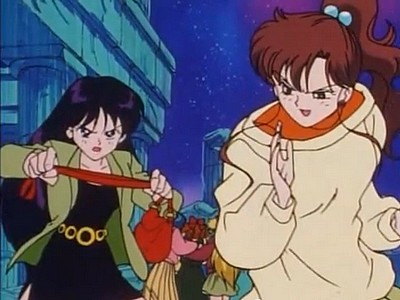 For Love and for Justice: Sailor Guardians Once Again

Ami, Rei, Minako and Makoto are invited to a studio to audition for a part in a new TV show. Seijuro and Natsumi are also invited, however, Usagi was not, so she decides to sneak in. Once inside, she realizes that it is a trap and a cardian is sucking the life energy out of her friends. She transforms and tries to help but is captured. Luna is forced to restore the girls' memories. Reunited again, the Sailor Warriors defeat the monster. 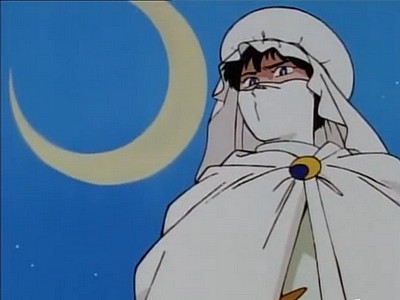 For Whom Is the White Rose: The Moonlight Knight Appears

When a new cardian attacks a friend of Mako, she becomes hellbent on revenge. Rei uses her divination powers to discover where the cardian will attack next, and the girls go to challenge the monster. The situation turns dire, however, when the cardian defeats all of the girls and then starts to close in on Sailor Moon. Suddenly a masked man appears and throuws a white rose. He says he is the Moonlight Knight, and attacks the cardian with his sword. After Jupiter recovers and defeats the lion, the man vanishes just as mysteriously as he appeared. Usagis is heft wondering if the mystery man is really Mamoru in disguise. 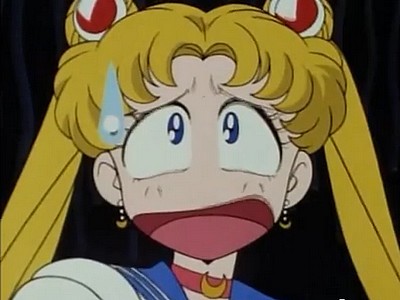 Ali and En hatch another plan to save their Doom Tree. They scheme to collect energy from humans at a new virtual reality game. Everyone is excited about the game and a line forms. En picks the card and Ali plays his flute to turn it into a monster. The cardian starts attacking everyone. When Sailor moon tries to use her tiara to destroy the monster, it doesn't work! The Moonlight Knight and the other Sailor Warriors arrive just in time. After the Warriors defeat the cardian, Usagi is left more confused than ever. Why does her tiara not work? If he's not Mamoru, just who is the Moonlight Knight? 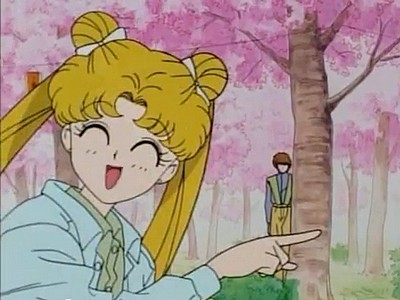 It's cherry blossom season, and the girls go to the park to enjoy them. Ali and En are also there because they plan to collect energy from the revelers. After a bunch of attacks from a cardian, the Warriors go to investigate. They are ambushed by the cardian, who begins to suck their energy. Sailor Moon arrives, but when the cardian attacks, her transformation broach is destroyed. She turns back into Usagi and she and Luna are pulled into another dimension. There they meet Queen Serenity, sho gives her a new broach that contains the Silver Crystal. Usagi tranforms and goes to challenge the cardian, but she is still too weak. The Moonlight Knight offers some words of encouragement, and Queen Serenity also appears and gives her the Moon Scepter. With a new wand and a new attack, Sailor Moon easily defeats the cardian and rescues her friends. 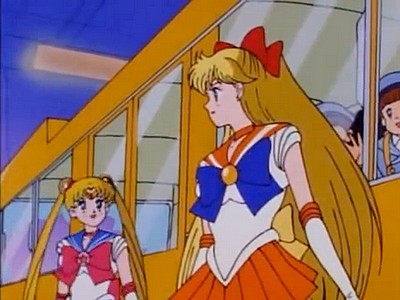 The Targeted Kindergarteners: Venus to the Rescue

Ali and En decide that young humans have a lot of energy, so they target kindergarten students in their new attack. Usagi uses her disguise power to become a teacher and gets on a bus that Ami predicts will be the next attacked. Minako was already on the bus because she had befriended a little girl who was being bullied. When the cardian attacks, both Sailor Moon and Venus are too weak to defeat it. After the Moonlight Knight offers some encouragement, Sailor Venus uses a new attack to blast the monster. Sailor Moon finishes off the cardian. 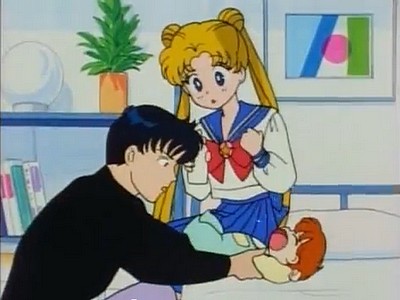 The aliens decide to attack a nursery school to get energy. Ami and Usagi witness the attack. Mamoru also arrives, and they all go to the hospital together. When they realized that little Manami will have no one to care for him while heis mother is recovering, Usagi and Mamoru volunteer. Of course, things quickly become a mess. When the cardian attacks another nursery, the Sailor Warriors go to defend the babies. Sailor Mercury uses a new attack to freeze the monster, and Sailor Moon finishes him off. Usagi and Mamoru return the baby to his mother and are amazed that he can now talk! 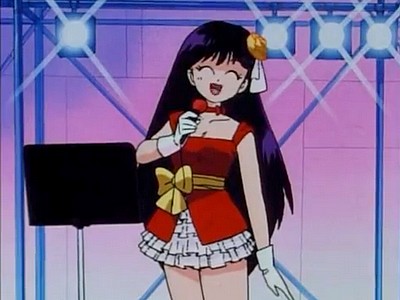 The School Festival is for Me: Queen Rei's Song

Rei helps organize the Culture Festival at school and starts to get a big head about her singer/songwriter talents. Meanwhile, Ali and En decide that the festival would be a good opportunity to collect energy. When the cardian attacks in the middle of Rei's song, she gets so mad that she transforms and uses a new attack. Sailor Moon finishes the monster off, and the festival continues. 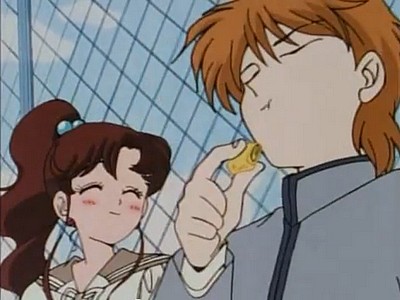 Is Seijuro the Moonlight Knight? Mako On Fire

Seijuro is always getting harassed by girls who want to make him lunch. Mako starts to get a crush on him because she thinks he might be the Moonlight Knight. She follows him to the roof and offers him part of her lunch. He grudgingly accepts the food (he had never before eaten Earth food). En gets jealous and attacks them both. The other Warriors appear, but are quickly trapped by the cardian. Jupiter uses a new attack after she is freed by the Moonlight Knight. Sailor Moon finishes off the cardian, but Ali and En escape together. 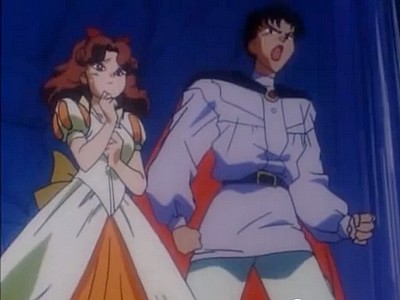 The girls decide to help Mamoru stage the play Snow White. They all argue over who will get the lead part, and decide to draw straws. Natsumi rigs the draw so that she will get the part (which involves kissing Prince Charming, played by Mamoru). Ali gets jealous and sends a cardian to attack. The Warriors work together to defeat the monster.

\[Old review is old.\] (This review proceeds from Sailor Moon, so start from the beginning if you haven’t already!) The next set of challenges the Sailor Soldiers have to face is the arrival of a mysterious, pink-haired little girl named Chibi Usa. She claims to be the daughter of Usagi and Tuxedo Mask, who, it turns out, were the rulers of the futuristic moon kingdom that Luna was talking about. I left this part out of the first season review because of possible spoilers, but seeing as it continues to be a known factor in the story, I guess the cat’s out of the bag. Chibi Usa helps the soldiers battle and eventually becomes a Sailor Soldier herself. After some filler villains, the real antagonists try to control Chibi Usa for they own gain, and the Sailor Soldiers fight against it. The main problem with this season is just how similar it is to the first one. First off, due to the events from season 1’s ending, we get to go through an extremely familiar process that was already done in the first part of the show. The first villains for about ten episodes were done as filler, and the big villains for the next part of the show ended up being extremely forgettable. For the most part, season 1 was forgettable too, but at least there were certain arcs and character developments that stuck with me. The shocking conclusion also left a memorable impression, compared to a relatively safe and forgettable ending for this season. So overall, Sailor Moon R is half filler, half forgettable. We don’t get many new characters aside from Chibi Usa and (get this) Tuxedo Mask gets replaced by some arabian knight for the first part of the season, saves the Sailor Soldiers just like Tuxedo Mask…and then just turns back into Tuxedo Mask. I was deathly afraid that Chibi Usa would be even more annoying than Usagi, but somehow they were able to make her much more tolerable. She does whine at a few times, but they’re times where she doesn’t really know what she’s supposed to do, and to be fair, she’s a little kid! Usagi is on the verge of high school, yet somehow she’s even more whiney and incompetent than Chibi Usa, even though she’s the one that’s supposed to be growing and developing overtime (which still doesn’t happen in this season). Chibi Usa was able to get away with stuff like that because she was very young and it’s expected that she would act that way. The villain arc also makes her go through the great progression of wondering if she belongs with the others, if they will tolerate her, how she’s able to fit in between dimensions, and it actually makes her a more interesting character than Usagi. Infact, she’s about as interesting as the other soldiers in the show. For the most part, the other characters remain unchanged, but every once and awhile an episode comes along to build them up some more and make them even more likable. Just when one soldier gets a ton of focus to get development, another one goes through some more events that make her more interesting, and it happens to all of the soldiers. It’s fun to see this group grown and get more and more entertaining as the show goes on. Now if only I could say the same about Usagi. Many more elements from the first season carry over to this one, like very slow progression of lot, Tuxedo Mask having to save anyone, all that stuff. After about 90 episodes of the same old song and dance, I began to wonder if the show would be able to somehow catch my interest as it went onto its third season. Ah, what a pleasant surprise that was... (This review continues on to Sailor Moon S. My final score will be given at the review of Sailor Moon Sailor Stars.)

Start a new discussion for Bishoujo Senshi Sailor Moon R anime. Please be fair to others, for the full rules do refer to the Discussion Rules page.