This season makes a turning point in the Sailor Moon story. The Sailor Senshi are confronted by a new enemy, the Death Busters. Rei had a premonition that this enemy would rule the world in an era called the Silence. To do this, the Death Busters need to find the three Talismans that would summon the Holy Grail. However, two mysterious Sailor Senshi, Sailor Uranus and Sailor Neptune, plan to find the Talismans before them... but without Sailor Moon's help. 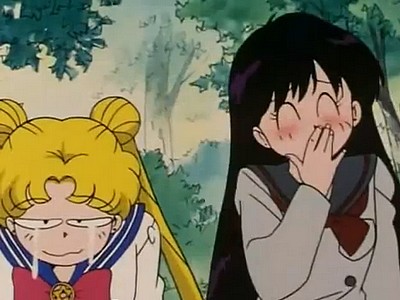 Premonition of World's End? The Appearance of Mysterious New Warriors!

Rei has a startling premonition while studying with the studying with the s at the shrine. The world is coming to and end! Meanwhile, Professor Tomoe, an evil genius, has presented the Sailor Soldiers with a new threat. He's created monsters that can steal people's pure hearts! He won't stop until he finds the three pure heart crystals, which contain the talismans that can bring forth the Holy Grail. And on top of that, two mysterious warriors appear and are after the pure heart talismans as well! The sailor soldiers fight bravely against this new threat, but what's this? They almost lost! This could mean trouble for the Sailor Soldiers. 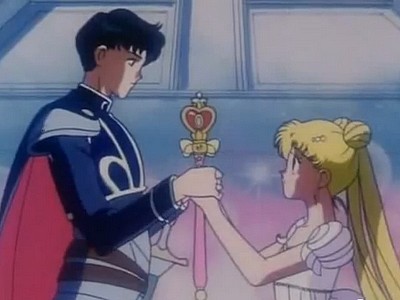 The Rod of Love is Born! Usagi's New Transformation

Usagi has a nightmare about the light of the Silver Crystal fading and wakes up only to find that it's not a dream! Mamo-chan tries to cheer her up by taking her to an abandoned church where all the stray cats of the neighborhood live. Usagi makes friends with a young girl who has been taking care of the cats. But the little girl's been targeted by a Daimohn named Nekonnell! Usagi tries to help, but she can't transform. When all hope seems lost, Usagi's useless broach suddenly transforms into an even more powerful transformation. With her power restored, Usagi transforms, defeating Nekonnell with an all new attack! Only seconds before, the two mysterious warriors appeared yet again, but left after they found that the little girls heart did not contain a talisman. Unfortunately, this is only the beginning for the Sailor Soldiers. 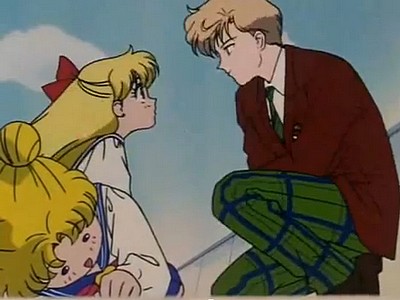 A Beautiful Boy? The Secret of Haruka Tenou

Usagi and Minako meet a young boy and a young lady, and fall for the boy...deciding to follow him around. They are caught by surprise when a daimon appears, and they must fight it...when the help of the mysterious warriors Neptune and Uranus. Later, Usagi and Minako meet the boy finally, and learn that it is a masculine woman. 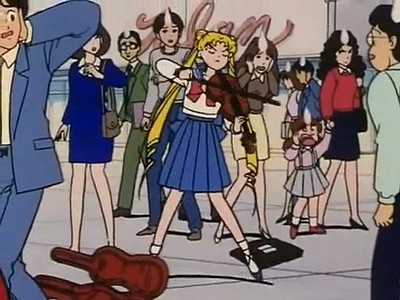 Usagi feels lousy and wants to be a better person, like Michiru. Michiru invites her, the girls and Mamoru to a violin concert, and they agree. At the concert, the violinists violin is changed to a daimon named Octave, so the warriors and the mysterious warriors work together to stop Octave, and save the heart. 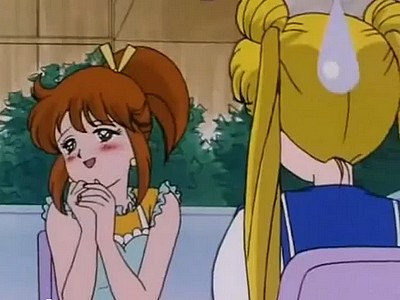 Protect the Pure-Heart! A Three-Way Battle

Usagi's friend (Motoki's sister) Unazuki is the target for this week! When Unazaki's heart is snatched, Sailor Moon goes after the daimon, and so do Uranus and Neptune. Moon, Tuxedo Mask and the mysterious warriors meet up, and faceoff for the heart. They defeat the daimon, but fight each other for that heart. Neptune and Uranus determine not to be a pure heart, and give it to Moon, who returns it to a dying Unazuki just in time. 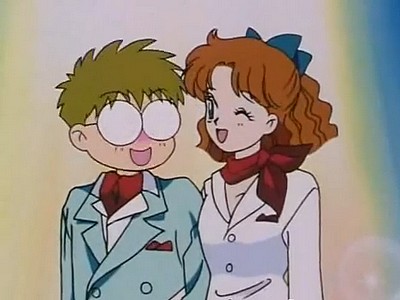 Leave it to the Moon for Love Aid

Naru and Umino decide to go for the love contest; along with Haruka and Michiru and other couples. Umino messes up terribly, and is the target. When his pure heart is taken, Moon helps restore it...so Naru and Umino walk off, happier as ever. 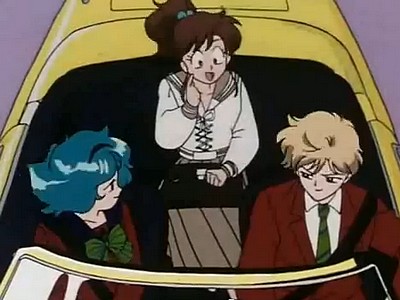 Makoto, to feel more mature, tries to be exactly like Haruka, and begins to hang around her all the time. Makoto is the target, and is suddenly attacked, so Uranus and Neptune attack her for the heart, when Moon and the others appear for the fight. They return the heart, and jump away. Suddenly, detransformed they pretend the daimon hurt them also, and explain to Makoto she doesn't need to be around Haruka to be mature...and everything is back to normal. 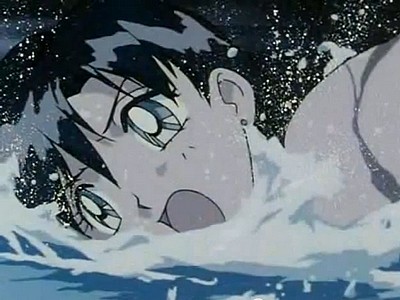 The Labyrinth of Water! Ami the Targeted

Ami's desire to avoid competition leads her to offending Michiru in a swimming race. Meanwhile, a Daimon selects her as a target. 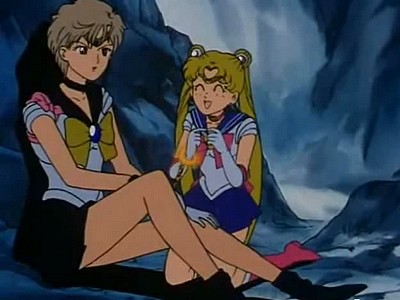 Sailor Moon and Sailor Uranus work together to defeat a daimon. 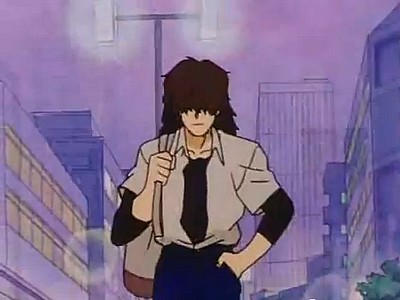 The Kindness of a Man! Yuichiro, Heartbroken by Rei?

Worried by Rei's intensive meditation, Yuuichirou becomes concerned that she has fallen for another man. When he sees her with Haruka, he is convinced that she is Rei's new suitor.

Several things I took into account when I left R, the 2nd season of Sailor Moon.The biggest one, now that Ikuhara has complete dominance of the series, will it be better than the surprising R?Turns out I didn't take enough things into account; not only was Sailor Moon more popular than I imagined, but Toei must've not felt that they could compete with other angst-ridden series airing at the same time with author's content.It took a while, but S is really no better than the 1st season of Sailor Moon. Padded, reverse character development, gambling the meat of the promise at the end; just makes another stepping-stone to "that great season Sailor Stars…"Flashing back for a moment, the last episode of R did a fine job of hinting of the next villains who I can only compare to Dr. Gero from DBZ; mysterious, uses experiments to fight primarily, and deceptively goofy in his own right.It also hinted the most complicated characters yet to see, Neptune and Uranus.S had a lot to live up to; Earth based villain(s), and peculiarly different heroines are thing that can really make or break a show.Of course, I wasn't expecting any of the usual tropes to disappear, such as transformation sequences, monster of the week battles, or how the characters can't identify the obvious. These annoyances aside, credit in how they make proper use of episodes for fleshing out Uranus and Neptune's unique cases, their unique bond, and why, should be in order.However, I will not. Because Ikuhara decides to have those episodes be little more than detailing for background. Once Uranus and Neptune's cards are down, hardly any camaraderie bonding that's signature to SM is present. Heck, it actually widened the primary characters away more!In that single instance, these fascinating new characters, chained to their destinies and almost let go of it to embrace real friends, only embrace what pained them more; a literal flick of a switch. Talk about inconsistent.That takes half the show!As I mentioned earlier, Toei must've had their hands full with DBZ/GT, or felt scared about competing with Gundam, the Brave series, or Eva, because the art remains a little late-R throughout; no improvements.Aside from interesting monster transformations that are extremely creative with their habitual powers (quite cool actually!), its all chump change to what beauty Toei neglects.Musical wise, Arisawa must've liked the variations he practiced with the R Movie(which is good), since he gives each of the Inner Sailors a personal theme(when they aren't around Moon of course), which actually helps make them feel more individually effective then just pawns for Moon.The OP theme has different singers (I think its Moon herself) but it's still one of the catchiest shojo numbers. The END isn't a stand out, but being relatively, calm and soothing helps match the gentler tone S adapts later on.R's plot greatly revolved around the origins of Chibi-Usa and made her personal journey with the fascinating plot directions all more marvelous.But with the plot here being dragged out with little pay-off, all that's left is character integrity.This is why the greatest blunders of this season are, without question, the Outer Planets. Pluto, who technically debuted in R, shows up now with significantly more involvement, but like the later robotized Uranus and Neptune, quickly becomes just as empty as one of those comfy containment chambers for psychotic criminals.Lock whoever managed the scripts on the Outer Planet sailors away in that same room!Compared to that blunder, Chibi-Usa's reentry taking her bond with Usagi a couple steps back is a trifle.Nevertheless, that also makes the usual banter between Moon &amp; Inner P. feel complacently stale. It helps that they make some of the characters rough with Uranus and Neptune (the Jupiter vs. Uranus fight doesn't happen in this season, folks!), but it all feels utterly spoiled by the blunder.Thankfully, the surprise inclusion of "the last sailor" does put a nice spin on honest emotion.Being that emotion is Sailor Moon's strength, this makes the ending both memorable and satisfying...I found the fun factor of this season to be a little stronger than the 1st season, but nowhere NEAR how fulfilling a single episode of R could be.Faulty handling of characters (yes that blunder!), really makes transitioning to newer circumstances difficult since they are always involved!Even the ending's unpredictable outcome features a last stand of Uranus and Neptune being the most distanced excuses of females I have ever seen.Please try people, not to think of this as "another good season" of SM, because it is not.I have yet to see Super S, but this season might just rank with it for pissing potential down the drain.It's bad enough to use creative energy only to fail; it's another thing to do something half-assed.And S is, unfortunately, the latter.(LGT)Story: BArt: C+Sound: BAnimation: CCharacter: C+Enjoyment: COverall: B-+ Great first half; handles the differences and slow transitions of Uranus and Neptune wonderfully. Saturn's tale is a splendid final bow to this season. Musical improvements.- Painfully stupid plot decision in the middle; throws off the pacing and later developments for a little too long. Toei skimped out too much here.

Start a new discussion for Bishoujo Senshi Sailor Moon S anime. Please be fair to others, for the full rules do refer to the Discussion Rules page.