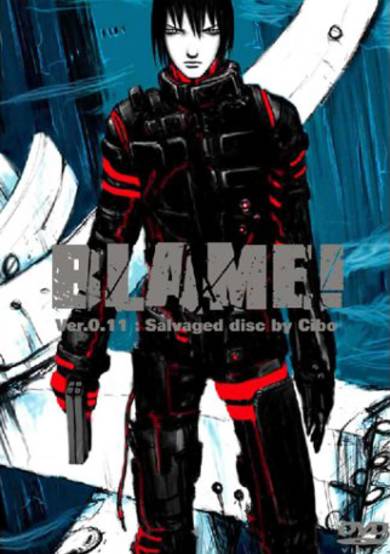 The story takes place in a city where it's said that has thousands of levels. In a shutdown area, thousands of levels overlap each other, you couldn't tell the sky from the ground and you couldn't tell which way is up or which way is down. Maybe the original purpose of this story is to unravel the mysteries bound in this time and world. For the humans who found this vast rare multi-level city, the mysterious main character "Kirii" wanders to search for the "Net Terminal Genes" that were not infected. Kirii's burden and his search for the "Net Terminal Genes" is a goal like no other and is very much the mystery of this story. Log1~Log6 contains the story of Cibo that wasn't done in the original works. The Cibo who strayed away with Kirii and wanders about. A disc thrown away in the rubble. Cibo starts downloading. Just who's "Memory" will he end up with? (Source: AniDB) Note: These clips are meant as a bonus to the manga, and should only be taken as such. Do not expect any plot in these. They are merely animated (short) scenes from the manga.

Warning: Will Lead to a Bad Trip. Do Not Take Drugs and Watch BLAME! What the hell is BLAME!? BLAME! is originally a 10-volume manga written by Tsutomu Nihei. Nihei is very famous for creating these vast and spectacular machine-worlds with very little humanity left. If you came here from watching Knights of Sidonia, probably Tsutomu's most mainstream work, you'll find little relation between that and BLAME! Story You won't be watching this for the story. As far as what the anime is willing to show you, there's a guy named Killy trying to climb to the top of this crazy robo-city searching for Net Terminal Genes. These are the key to destroying some evil cyborgs called Silicon Creatures. That's really all you need to know, because really the story is basically not the point of watching this show. As far as context goes, it's good enough. Sound Harsh and grating electronic noises are contrasted with deep bass, and oftentimes outright silence. Manga readers used to seeing Tsutomu's brilliant art will get a treat here from the added level of immersion. There's some experimental sounds used here, with what sounds like a guitar played through a muffled amp in a warehouse. Stock sounds are used intermittently, but they don't feel as out-of-place as a Wilhelm scream. Visuals In case you're blind you should have noticed the screenshots throughout this review. The extraordinary attention to detail in each scene of the city hits you in the face and puts you right in the middle of this amazing dystopia. These are the primary attraction of Tsutomu's works: the world full of machinery, electronics, and noticeable lack of humanity. A world created indirectly by man, where man can no longer survive. The animated portions tend to just be low-effort, as there are very few keyframes. The focus is entirely on the background, and it will suck you in. Overall You get exactly what you're looking for from a Tsutomu work here. You can't be certain if its the future, or exists right now. Tsutomu has been there, and he would love for you to visit, but you certainly shouldn't stay. It's a harsh world where no ordinary human being could survive. It's an amazing place to sightsee, so take it all in.

The Blame! anime is really an immersive experience, as if you were within the world of the manga. It starts off even in the DVD menu, which is presented in glyphs and only sort-of functions. The episodes themselves are short and disjointed, as if reviewing footage left behind on an old computer. The style is experimental with limited animation (leans more toward colourized images from the manga). As I said the episodes are very short, so unless you're a collector the DVD might not be worth it. It sort of makes sense if you've read the manga and are already a fan. I wouldn't recommend it to someone who knows nothing about the series.

Start a new discussion for Blame! anime. Please be fair to others, for the full rules do refer to the Discussion Rules page.