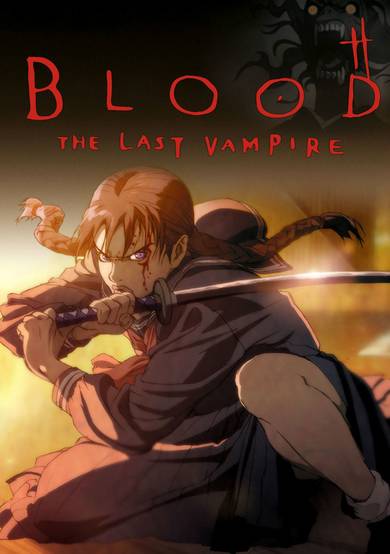 Teropterids are evil beasts which pose as humans and live only to drink human blood. Fortunately for the human world there are groups dedicated to destroying them. A brooding and mysterious girl named Saya is the best teropterid slayer there is, and now, in 1960s Japan, she is sent to a U. S. army base which may be infested... (Source: ANN)

"Blood: the Last Vampire" is a good old fashioned horror/action flick... though it's only 50 min long, which is pretty darn short for a movie. Not that it's a bad movie at all. It fares pretty well despite the length, with no glaringly big flaws to pick apart.Being an action heavy movie, the action is obvious a very important aspect, and it's something that "Blood: the Last Vampire" delivers on all accounts. The action is fluid and bloody, fast and furious from beginning to end, with very little respite in the middle. The thickly atmospheric direction is brilliant at times, especially in the opening scenes. The artwork is fittingly dark and generally good all round, though the drawing of the characters themselves weren't so hot. In a break from tradition, "Blood" mostly uses English voices as it takes place in a US base. However, the original language being in English doesn't appear to have stopped the English voices from sounding lacklustre like it generally does on a dub. It seems like a lot of people feel very much let down by "Blood: the Last Vampire", and that's probably because of the story. The main storyline in this movie is very simplistic, and mostly self contained, but it does drop tantalising hints regarding a much bigger mystery that this movie is only a small part of. Could they have revealed more by making the movie longer? Perhaps. But then again, a longer movie might not be able to incorporate enough information to make this movie complete, and you would end up with an even less standalone work that's neither here or there. As it stands, I didn't find the presence of a couple of loose ends bothered me \*that\* much.Admittedly, though this movie managed to do quite well what little time it has, I did find it slightly lacking because it's so short - if you saw it at a cinema, you'd probably ask for your money back for only getting to see half a movie. Outside the cinema though, you could do a lot worse than spend 50 minutes watching this.

Start a new discussion for Blood: The Last Vampire anime. Please be fair to others, for the full rules do refer to the Discussion Rules page.