Sakura Kinomoto is your garden-variety ten-year-old fourth grader, until one day, she stumbles upon a mysterious book containing a set of cards. Unfortunately, she has little time to divine what the cards mean because she accidentally stirs up a magical gust of wind and unintentionally scatters the cards all over the world. Suddenly awakened from the book, the Beast of the Seal, Keroberos (nicknamed Kero-chan), tells Sakura that she has released the mystical Clow Cards created by the sorcerer Clow Reed. The Cards are no ordinary playthings. Each of them possesses incredible powers, and because they like acting independently, Clow sealed all the Cards within a book. Now that the Cards are set free, they pose a grave danger upon the world, and it is up to Sakura to prevent the Cards from causing a catastrophe! Appointing Sakura the title of "the Cardcaptor" and granting her the Sealed Key, Keroberos tasks her with finding and recapturing all the Cards. Alongside her best friend Tomoyo Daidouji, and with Kero-chan's guidance, Sakura must learn to balance her new secret duty with the everyday troubles of a young girl involving love, family, and school, all while she takes flight on her magical adventures as Sakura the Cardcaptor. [Written by MAL Rewrite] 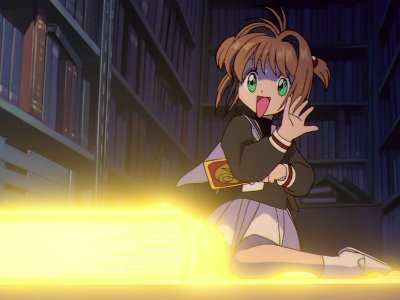 Sakura and the Strange Magical Book

Sakura Kinomoto awakens from a dream of standing near the Tokyo Tower. She introduces herself, her family, and her friends. After coming home from a normal day at school, Sakura hears a sound coming from the basement. She finds a glowing book and opens it to find a deck of 52 cards. When she accidentally activates the Windy card, the other cards blow out of her house. Cerberus appears from the book and formally appoints Sakura as the "Cardcaptor" and gives her the Sealing Wand. Sakura captures the Fly Card, but she adamantly insists she does not want the job. All the same, she shows quick thinking, considerable magical power, and sheer joy on her first ride on the tamed Fly 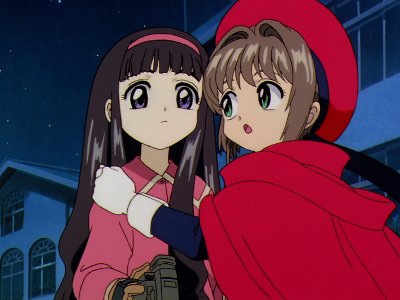 Tomoyo meets Cerberus after she discovers Sakura's secret and gets a full explanation of the lost Clow Cards and Sakura's designation as Cardcaptor. Cerberus gets given the nickname "Kero-chan" that will stick for the rest of the series. The next day, the students find the school's desks and equipment in large piles. Kero believes it was the work of the card and forces Sakura to go to school at night where she confronts The Shadow. Using the Windy card's binding ability, Sakura is able to capture the Shadow card. Sakura finally accepts her role as a Cardcaptor because of Tomoyo's support. 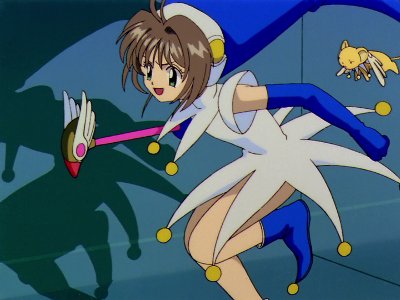 Sakura's class is on a field trip to the aquarium. During the penguin show, something catches the trainer's leg and a penguin and pulls them into the water, but they are saved by Sakura's brother, Toya, who is working part-time there. At school, Tomoyo gives Sakura and Cerberus mobile phones and on the way home, Sakura bumps into Yukito who invites her on a casual "date" which is at a cafe where Yukito knew Toya was working. While they are eating, The Watery breaks the glass of the aquarium causing a flood. For the first time Sakura has to formulate a plan to capture a card, rather than jumping into battle and attacking with Windy. Using her wits and an unintentional clue from Yukito, she lures Watery into a freezer to immobilizes and capture it. 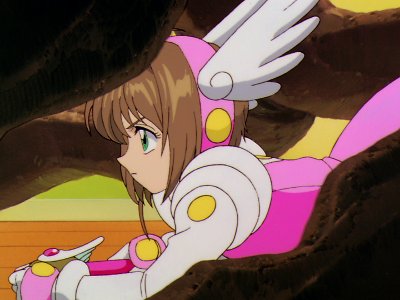 While cleaning the house, Sakura finds two dormant Clow Cards, The Wood and The Rain. But while running an errand for her father, the two cards activate creating a jungle inside the house. Sakura uses The Watery to capture The Rain card and The Wood yields on her own. Sakura gets the hard-earned lesson that a card is not fully subdued until she signs her name on it. 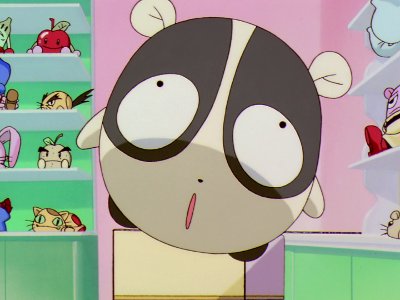 Sakura, a Panda, and a Darling Little Store

On the way to school, Sakura meets Maki Matsumoto who is opening a stuffed doll shop called Twin Bells. Sakura and her friends visit the shop after school to find most of the merchandise unpacked, so they offer to help. Chiharu Mihara, who has a fondness for stuffed animals, buys a stuffed panda, but it disappears shortly after taking it home. Sakura discovers the panda back in Twin Bells and Maki explain the reason for opening the shop and her business has been plagued by mysterious happenings that almost forced her to close down. While Tomoyo distracts Maki in the back, Sakura and Kero search the shop to find The Jump, which escapes with all the stuffed dolls in the shop. At Penguin Park, The Jump grows into a giant by absorbing the stuffed dolls, but it knocks itself out after it trips and falls allowing Sakura to capture it. 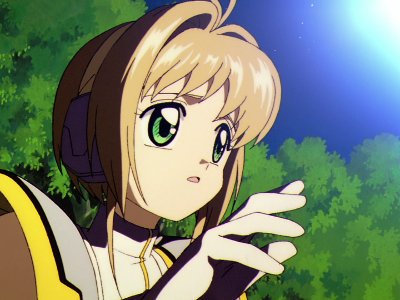 Sakura and Memories of her Mother

Naoko tells everyone a scary story about a bright light she chased into the woods. After school, Sakura and her friends visit the woods to see the light Naoko saw. When they do see it, everyone runs in fear, claiming they saw something appearing from the light, but everyone saw something different. Sakura returns at night in case it was a card despite her fear of ghosts. After following it near a cliff, the light takes the form of Sakura's deceased mother, Nadeshiko. Sakura, who is delighted to see her mother, walks towards it and off the cliff, but she is saved by an unknown entity and safely lowered into Yukito arms who is passing by. Sakura returns to the cliff a few days later and once again walks off the cliff. She realizes that it couldn't be her mother and discovers it to be really The Illusion. 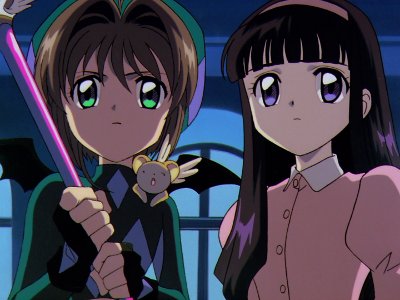 Sakura's First Attempt as a Thief

At an art museum trip, Sakura witnesses a boy attempting to change a painting. During the commotion, she couldn't hear anything and Kero is sure that it was caused by a Clow Card, The Silent. Sakura sneaks out of the house at night and into the museum where they meet the boy from earlier also sneaking in. The boy, Yūki Tachibana, explains the painting is by his deceased father and his mission to restore the painting which a Clow Card has covered up. Every time Sakura attempts to capture the card, it transports the group outside. Using The Shadow, Sakura is able to silently capture Silent from a distance restoring the painting and discovering Yūki is actually a girl. A stranger, dressed in an odd costume, appears at the end of the episode and quietly mutters that he senses a Clow Card. 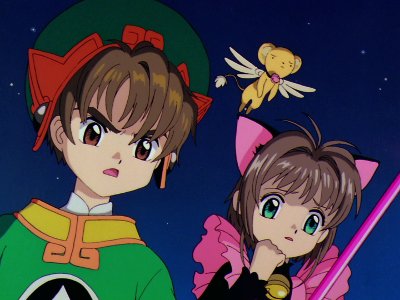 Sakura has the same recurring dream she had in episode one, specifically focusing on the boy wielding a sword in Chinese clothing. She hears from both Cerberus and Yukito that it might be a "foretelling dream". A new transfer student arrives from Hong Kong named Syaoran Li and is seated behind Sakura. He terrifies Sakura with his glares all day and during recess, he demands Sakura to give him the Clow Cards. On the way home, there is a lighting storm, but no rain. Cerberus explains Syaoran is from the Li clan, a famous family of Chinese sorcerers from which Clow's mother came. The same lighting storm for earlier appears and Sakura deploys to battle the Thunder card. Syaoran demonstrates his command over elemental magic and calls on thunder god to return the Thunder card to its original form. He instruct Sakura to use the Shadow card to encage the Thunder card so it could be captured. Thanks to Syaoran's constant derogatory remarks, Sakura is left feeling upset after a card capture for the first time. 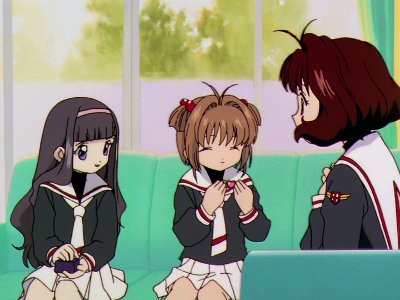 Sakura and the Mysterious Brooch

Sakura, usually cheerful, is forlorn by Syaoran's confidence and obviously superior skill. Rika and Tomoyo take Sakura to a shop to try to cheer her up. The three each buy brooches and return to Sakura's house for tea and pudding. When Rika puts on her brooch, The Sword takes control of her and attacks Sakura with a sword. Syaoran saves Sakura who refuses to attack Rika and stops him from attacking her as well. Using Illision to distract Rika, Sakura is given the chance to capture Sword. The next day, Syaoran is dismayed when he sees Sakura offer a gift of chocolate to Yukito, and quickly gives sweets of his own. Tomoyo has to explain to Sakura that Syaoran is "interested" in Yukito just like Sakura is. 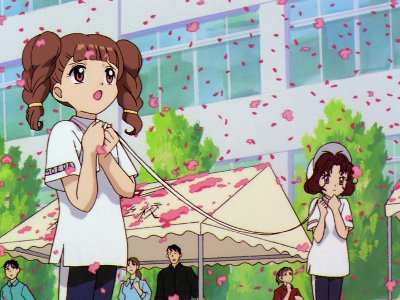 Sakura and the Flowering Sports Day

It's Sports Day at Sakura's school so family members has come to cheer the students on. Sakura meets Tomoyo's mother, Sonomi Daidōji for the first time. When Sonomi and Sakura's father, Fujitaka, meet, both are shocked. From their conversation, it is revealed that Sonomi is a cousin to Sakura's mother and she blames Fujitaka for her death, though not in any direct way. While Sonomi and Fujitaka race in the parent's race, there is a shower of flower petals. Sakura suspects a Clow Card and finds The Flower on the roof of the school.

The story and characters are just fun to watch, in my opinion. Replay value? Lots. The story is very simple, but I just like it for some reason. I just kept watching and watching, almost non stop! I just like everything about this anime, it's just a lot of fun! the characters are mostly great, every now and again you'll notice they don't behave like kids, which gets kinda weird, but who cares, it's fiction. Some other characters are there for no reason, but they do add to the fun (in my opinion). The animation is great, and not just for its time, I think it still holds up! Sound &amp; music? Perfect, I enjoyed it more than if it were modern! In my opinion, you'll either love it, think it's OK, or hate it. I. Love. This. Anime. For some reason.

My childhood. I love every character and every relationship explored in this series. The drawings are so cute and lovely. \*DO NOT watch the English dubbed version as it removes every aspect of romance and replaces it with flashbacks.

Start a new discussion for Cardcaptor Sakura anime. Please be fair to others, for the full rules do refer to the Discussion Rules page.