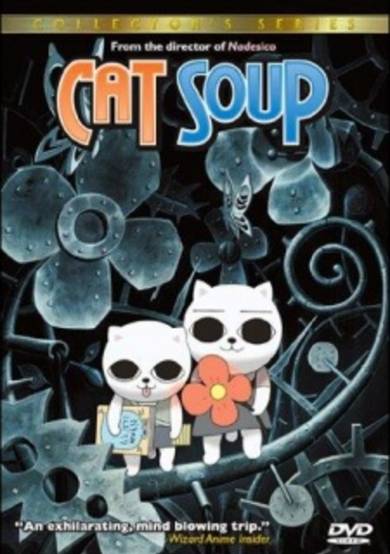 The main character, a cat named Nyatto, embarks upon a journey to save his sister's soul, which was ripped in two when Nyatto tried to save her from Death. She trails after him, brain-dead. They encounter many brilliant, mind-bending situations, beginning with a disturbing magic show. (Source: ANN)
User Count5457
Favorites Count85
Start Date21st Feb 2001
Next ReleaseInvalid date
Popularity Rank1920
Rating Rank3315
Age RatingR
Age Rating Guide17+ (violence & profanity)
SubtypeOVA
Statusfinished

I hate shows that doesn't make any sense whatsoever. I never cared for trippy insanity such as those found in abundance in "FLCL" and "Dead Leaves"... and "Cat Soup" is about as trippy as they come - it makes me wonder what the hell the producers were smoking when they made this. There is no dialogue for starters, and after the first couple of minutes, there is barely any coherence either, just random scenes flashing across the screen. I just don't get it - what exactly is the point of this kind of anime? The art is ultra simplistic, the story is non-existent, and to say the characters are zero dimensional would be flattering to the extreme. If it's suppose to be entertaining, then it failed as I found it intensely boring despite its short length. If it's supposed to be funny, well, apart from one scene that appear to be some whacky, gruesome parody of a magic show, I didn't find the anime amusing in the slightest. If you like psychedelic anime, then this is one for you. Otherwise, you'll want to give this piece of crap a \*very\* wide berth.

Cat Soup, where to begin... This bit of animation is hard to review. Why, you ask? Because it is art. And such as is the nature of art, it is open to interpretation. There is no doubt that some will abhor this; this is not anime for lovers of cliched romance or hyperactive action. This is anime for those who can approach a piece of animation with an open mind. And an open mind is something that this anime requires. Story: This anime follows a young kitten named Nyatto as he goes on a journey to bring his older sister Nyako from Ksitigarbha's grasp. That is the basic plot, and that is what I will tell, as it is up to the viewer to interpret the utter madness that ensues within the story. Animation: Cat Soup was animated by the glorious people of J.C. Staff, which, among being responsible for other gems and overly plentiful fanservice shows, was the studio behind Excel Saga. That should tell you what to expect from the movie, however that is irrelevant when the animation values come in. The animation follows the deceptively simple style of the manga artist Nekojiru, as the movie was adapted from her work. As a note of reference, Nekojiru debuted in the (in)famous and highly influential underground manga anthology Garo, which can be known for housing such manga artists as, say, Seiichi Hayashi and Yoshihiro Tatsumi. That note aside, the animation follows Nekojiru's style to a tee, from the (again) deceptively childlike character designs to the simple background designs. The animation is fluid and up to par if not over with the standards of an OVA from the time. This was released in the February of 2001, so in comparison to other works at the time, the animation is excellent to say the least. And when factoring in the handling of the surrealist scenes such as the circus, it is downright impressive. Sound: The one thing I will say about the sound: it knows where and when to play. Now, with that said, it isn't anything special. It isn't something you would go out of your way to listen to. And it isn't particularly memorable. It plays out the childish atmosphere, and that adds to the surreal experience of the film. Characters: As this is an adaptation of one of Nekojiru's short stories, characters are hardly developed. But is that a bad thing? In a traditional piece of anime with an overarching plot that exists to move from point A to point B, that would be a yes. It would be a definite yes. But this is an experimental anime that adapts from its source material. The characters are there to tell the story. To allow the experience to begin. There is hardly any dialogue in this anime, and there is a reason to that. Characters take a backseat to the story as they are simply a means of progression. Enjoyment: Well, well, well... this was an experience. Reminiscent of an acid trip fresh after smoking some mushrooms, this anime is psychedelic to the extreme. And the use of the psychedelic nature helped blend the fantastical plot with the surrealist humor. As I personally love off-beat/black humor, the humor in this was on par to my taste. And since the enjoyment is personal, allow me to say this: I absolutely loved this. Overall: This is an experience. It takes an open mind and a sense of the surreal. And I cannot recommend this enough. This should be experienced by anyone who is a fan of experimental animation (a la Don Hetzfeldt and some of Studio 4°C's work) or anyone interested in the strange side of anime.

I don't know where to start. It made no sense at all.  The only reason why anybody would watch this is because it's amount of absurdity it contains.  It's good though so watch it now.

Nnnnnnnnnnnnnnnngggggggggggg. WTF is all that can really be said about this, errr, thing. It hardly constitutes Anime it's that crazy.  Does anyone know a mental health doctor who could help with my new found fear of strangers and cats.

Start a new discussion for Cat Soup anime. Please be fair to others, for the full rules do refer to the Discussion Rules page.