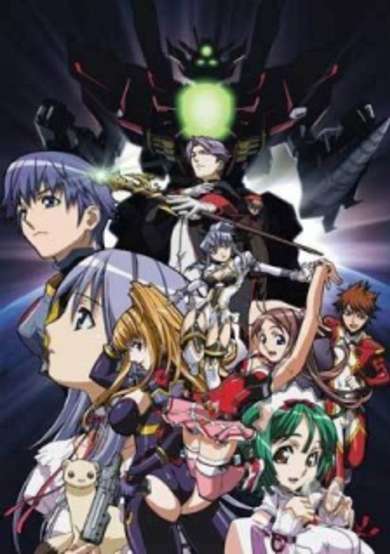 After Gravion was able to use its ultimate attack, the Zeravire threat seemed to have temporary stopped. However when it rises back up all of a sudden, the Earth Gult and its trump card, the super robot Gravion, is needed to defend this world again. All this while, the EFA is planning to create their own weapons to counter the Zeravire, the Grand Trooper. Now as they attempt to fend off the Zeravire, the people of the Earth Gult and EFA must protect their future as well as confront their pasts, and unveil the mysteries of the Zeravire. (Source: ANN)
User Count738
Favorites Count1
Start Date8th Jan 2004
Next ReleaseInvalid date
Popularity Rank5412
Rating Rank6895
Age RatingR
Age Rating GuideMild Nudity
SubtypeTV
Statusfinished 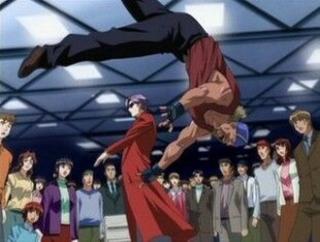 The Gravion team completes another mission, mucht to the delight of the president. Someone says the Zerevie are going to return at any moment. The team is made to be maids, due to a strip mah jongg game that got out of control. They are forced to cook, clean, do the laundry, repair robots, and more. Eiji is forced to wear a dress. Meanwhile, Mr. Sandman is meeting with someone elsewhere. Back at the mansion, Luna shows off Toga's room when he was a child to Eiji. Then the G-alert sounds. The Grand Knights go to intercept the intruder. After much destruction, they decide to combine, but cannot. He's stuck in a subway. After trashing a street punk, Sandman shows up and lets them combine into Gravion. A lot of chaos and distruction ensues, ending with the Zerieve being destroyed. Elsewhere, some generic sinister people are plotting to reshape the earth... The gang surfs the interenet and visits Gravion's web site. Every page is "under construction" except for a headquarters map, which looks like a 3-year-old drew it. The maids blame Eiji. Four people are wandering the mansion grounds. They're spotted by security, and recognized by one of them. Sandman and Cookie go out to greet them. They people were there to see Eiji. Eiji, meanwhile, is working out. He then stops to visit the people. They turn out to be old friends of his. The maids then take Eiji's classmates on a tour of the castle. At the end of it, Sandman announces he's treating the guests to a picnic. While there, the maids show the guests some home movies of Eiji. They show him in drag, and being a pervert, etc. X then gets drunk and starts acting that way. She tempts Raven with some beer, but he refuses initially. Later he gets drunk with them. Two of the guests are in the driller, and one of them accidentally turns it on. The driller goes out of control, taking the guests with them. The rest of the Gravion team goes after it. Sandman manages to get on board it and reset the driller, ending its rampage. They combine into Gravion. The president has discovered an 18th century picture of a man named Count Saint-Germain. The Count looks a lot like Sandman, and was rumored to be able to travel in time as well. It's generic trip-to-the-hot-springs episode! Raven and Cookie have stayed behind though. At the springs, fanboy service comes fast and furious. Ena is a bit shy, but her towel is taken away anyway. Eiji relaxes in the men's bath when some of the maids enter. In escaping them, he falls over a cliff with only a section of fence to protect him. He ends up turning it into a tobogan. He crashes through the women's bath. Toga joins Eiji, thinking this is a fun game. They end up crashing at the bottom, where Toga ends up on top of G-Force's commander. After getting smacked by her, Toga spies Sandman talking to a man. Later, Mizuki and Alex are battling Luna and Ena in ping pong. Mizuki and Alex win. Mizuki has a deluxe package ticket, and Sandman shows up, saying it is his. He has Leele battle with him against Alex and Mizuki. Sandman runs all over his oppoents. Ironically, Leele wins it for them. That's when the Zerivire decide to attack. The Zerivire is using the lava of a volcano to charge itself. They have 90 seconds to drag the Zerivire out. To communicate this, Sandman orders the maids to give a karaoke performance. No matter whether you choose English or Japanese, their ability to harmonize is awful. While they sing, the Gravion kicks the Zerivire out of the volcano, and destroys it. In the end, Raven is the one who gets the special ticket. 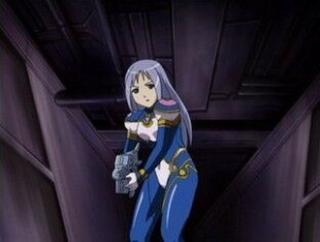 From the Bottom of the Wave

At the EFA's underwater energy base, something is attacking it. They ask Gravion to investigate. Leele goes there, and they lose contact with her. The others investigate. Eiji takes Una's place. The Zerivire attacks at this point. Toga finds Leele and rescues her, only to be confronted by some mini-Zerivire. Toga forces Leele into another room while he battles the Zerivire alone. Meanwhile, just as things were looking hopless outside, the rest of the Gravion arrives. Eiji finds Toga lying on the ground, with his head in Leele's lap. After the rescue, Gravion is formed and then attacks the Zerivire. Toga has lost his sight due to lack of oxygen. However, Leele goes to him and guides his hands. Later on, Toga recovers at the base. 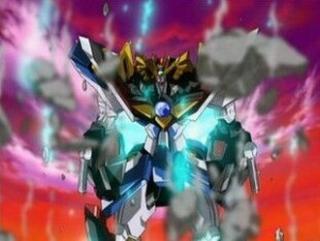 The gravion gang goes to an amusement park Grand Island with some of the maids. There's a Zerivire there. Back at the base, the maids protest to Raven that they want to go to the park too. Back at the park, they can't find anything wrong initially. Leele laments that she doesn't have any memory of her past; the others tell her that she can simply make some by being with them. Leele and Toga are in a skyride by themselves, and Leele makes a move on Toga. Meanwhile, the maids at the base are still pleading to Raven to go to the park. Raven suggest that he have Mizuki buy the maids souvenirs. This only serves to make them angry. Mizuki and Eiji are in the haunted house. They take a sharp turn and suddenly find themselves in a part of the haunted house where the attacking images are real. Outside, a cute boy accidentally runs into Luna, and then turns into a Zerivire. Then other people in the park start turning into Zerivires. When things look hopeless, Eiji and Mizuki show up to help out. The Zerivires combine and start becoming bigger. Their targets are the pilots of the Gravion, as Sandman tells us. The Gravion ships show up and the pilots unite to form Gravion. Gravion defeats the Zerivire. Unfortunately, that was only part of the problem. The whole park was a Zerivire. This Zerivire attacks the Gravion and infiltrates it. It seems particularlly interested in Leele. Leele screams at the sight of a Zerivire eye in her cockpit, and then suddenly, the Zerivire disintigrates. Leele collapses, saying she remembers her past, and she is a Zerivire. We are left with a shot of Sandman laughing at the base... 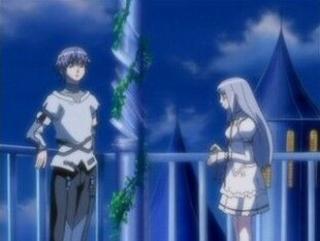 Elji and the others suspect that Sandman is hiding something connected to the frequent Zelabaia attacks, and they sneak into the north tower of St. Germain Castle. There they discover the Sandman's mysterious past and the secrets behind the creation Gravion. Some of the mysteries behind Leele's birth are also unveiled, and when Toga tells her about it, she is so shocked that she throws herself into the Lake. 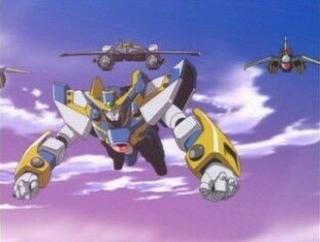 The Earthgultz members are worried about Leele. Toga in particular is berating himself becuase he always seems to hurt the people around him through his own carelessness and inability to understand their feelings. Zelabaia attacks while Toga is still upset, and his agitation keeps Gravion from functioning properly, making it flounder in battle. 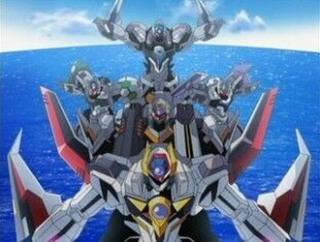 Sandman is keeping vigil on his daughter when the news comes: Toga's gone missing. Hugi has been watching this all this time, and gloats over this. It's going his way now. Eiji goes out after him. Back in the maintenence hangar, the maids are working around the clock to get Gravion back to fighting shape. Luna, meanwhile, has been captured by the EFA. They're analyzing her DNA for the Gravion data. meanwhile, Toga is hiding on the streets. Eiji enlists the help of his former classmates to find Toga. Meanwhile, the EFA goes public with their Gravion clone production team. The Zerivire attack an aircraft carrier. The EFA's Gravion is sent to stop it. The Zerivire rams the ship with the President on deck. Meanwhile, Sandman is suffering from self-doubts. Raven comes to confort him, and it doesn't help, that is, until Raven removes his mask... showing that he's really a she. She's really named Ayaka. She convinces Sandman to come back. (Although I have to wonder how Ayaka was able to hide that huge chest of hers in Raven's outfit.) Back at the fight, the EFA's Gravion has taken care of them. While the president goes on with endless blather, Toga is being attacked by two street punks. Faye comes in and saves him... 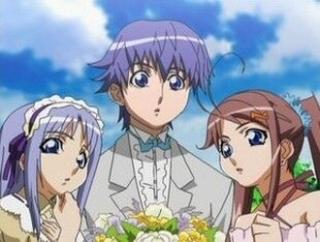 Leele finally awakens from her coma. Eiji's out looking for Toga. Faye takes Toga to the orphanage where they grew up. It was sponsored by Sandman. She tells him that she resents him for taking her position as the Gravion's pilot. Faye tries to recruit Toga into the Grand Troopers. Just as he's about to give into her, Eiji arrives. At the Grand Troopers base, Mizuki finds Luna as the President arrives for a visit. Back with Eiji, he and Toga fight over things. Meanwhile, a Zerivire ship has appeared over the city. It creates a gateway where a bunch of Zerivire ships come from. At the Grand Troopers base, Mizuki and Luna run into the President. Mizuki takes care of the President's guards. The president recognizes Mizuki as one of his agents. they take off in a plane, and pick up Toga and Eiji on the way back to the base. Meanwhile, the Grand Trooper is fighting the ships. It isn't making much headway in the matter. Even though Leele has not regained consciousness yet, Toga takes her on his ship. (Yes, I know earlier I said she woke up; it's a slip in continuity.) In the battle, Thoria gets knocked out early. The Gravion robot is seized by a Zerivire, and drained of its energy. Then Sandman calls forth the flame planet. A lot of energy comes out and destroys a number of the Zerivire. 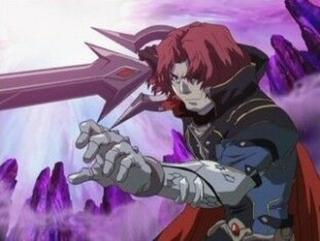 There's a new Gravion called sol Gravion. Zieg recognizes its power source as a device that decimated an alien race. It turns out the main pilot of the Sol Gravion is Ena. Ena tells us she's a clone of the original that died, but has all the memories of the original. The Zerivire apparently leave (yet another unexplained plot hole.) The Gravion team takes the Sol Gravion for a test spin. Sandman tells us that the Sol Gravion has the power to destroy the world - or create a new one. Eiji and Toga make up for their fight. Sandman frees Eiji, saying he has no obligations to Sandman anymore. Later Sandman talks to the President. The president pleads for continued support of Gravion. Then Sandman tells Raven that the true power behind Gravion Sol is the friendship and love that the team has for each other. Hugi then tells via a hologram that he will destroy earth in 48 hours. Some of Hugi's holograms attack Gravion. Then St. Germain castle takes off, shocking a lot of the maids on board. They form Sol Gravion, preparing for the final battle...

Start a new discussion for Choujuushin Gravion Zwei anime. Please be fair to others, for the full rules do refer to the Discussion Rules page.