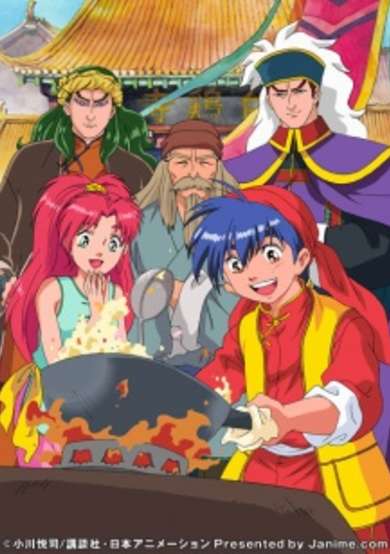 The story takes place in 19th century China during the Qing Dynasty, where the Emperor was weakened and the country was close to chaos. It is also during a fictitious era called "The Era of the Cooking Wars". It was an era in which top chefs with different cooking styles tried their best to improve their skills and to become the best chef in China. It is a country where insulting a high-grade chef or fooling around with cooking could land a person in a jail, and impersonating a top-chef is as good as usurpation of authority. Chefs compete with each other in order to gain respect and even power, but also with the risks of losing everything. The country of China has four major regions: Beijing, Szechuan, Shanghai, and Guangdong. The beginning of the story takes place in Szechuan, Mao's birthplace. After the death of Mao's mother, Pai, who was called the 'Fairy of Cuisine', Mao becomes a Super Chef in order to take the title as Master Chef of his mother's restaurant. However, before he takes his mother's place as Master Chef, he continues to travel China in order to learn more of the many ways of cooking, in the hopes of becoming a legendary chef, just like his mother. During his journey, he meets great friends and fierce rivals who wish to challenge him in the field of cooking. (Source: Wikipedia)
User Count1412
Favorites Count11
Start Date27th Apr 1997
Next ReleaseInvalid date
Popularity Rank4141
Rating Rank2688
Age RatingPG
Age Rating GuideTeens 13 or older
SubtypeTV
Statusfinished 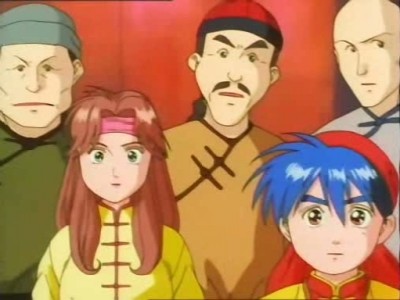 Qing Dynasty, Imperial China, a small restraunt in Szechuan Province is messed up by a first grade cook, Shouan.To defend his deceased mother's restraunt, Liu Mao Tsing ('Mao') has a cooking match with Shouan, the judge being General Lee. The dish: fried rice. Shouan cooks a seafood fried rice using the most yummy seafood while Mao cooks 'golden friend rice' which is basically fried rice and egg yolk to make the rice a gold colour. Lee finds Mao's dish far superior to that of Shouan's. Shouan, upset he had lost to a kid declares a rematch. Lee agrees but only on the basis that if he loses, he'll lose his first grade level and never be allowed to cook again. Similarly if Mao loses he will lose the restraunt to Shouan. The two agree and Lee declares the dish to cook be 'Five Flavour Ma Por' tofu with an extra flavour they must decide to put in. 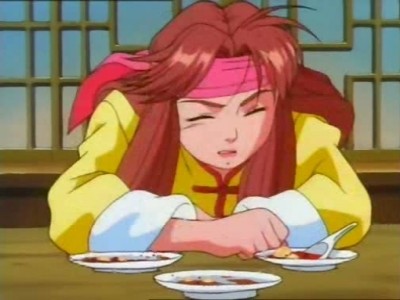 In the on-on-one cooking match Mao easily defeats Shouan. Shouan, shamed that he was beaten by a little boy, runs away from the restraunt. General Lee congratualtes Mao on his smart thinking in his cooking of 'Ma Por' tofu. Instead of using beef, Mao substituted it with beans. This gave the lovely taste General Lee remembered when he was just a soldier at war and there was no beef becasue all the cows had died. General Lee, seeing Mao's talent orders him to go to Guangzhou and build up his skills so he could enter the Special Grade Cooking test. 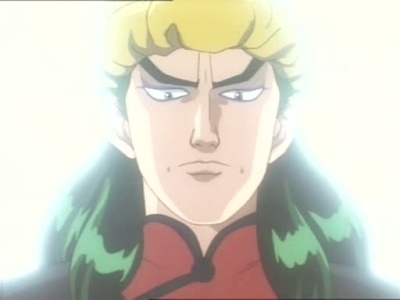 Mao arrives at Guangzhou and goes to the Yang Spring Restraunt. At first he is ignored by the master chef of the restraunt, Choyu. Mao shows him the letter of recommendation from General Lee to which Choyu becomes a bit suprised but just chucks the letter away and tells Mao to cook bakchoy (white chinese cabbage) for the chefs to eat for lunch. Mao cooks the bakchoy but the dish is turned down by all the other chefs. Later Choyu tells him that Guangzhou's water contains a lot of dirt so when Mao cooked the bakchoy all the dirt flavour went into it. Mao, being the talented cook he is immediately goes to work finding a way to get rid of the dirt taste. After just one day, Mao works out how to get rid of the dirt taste and begs Choyu to allow him to prove his skills. Mao cooks the bakchoy again, this time using an oil which prevents the cabbage from absorbing the dirt taste. Mao is congratualted by all the chefs for his smart thinking and is accepted Choyu promotes him to'fourth grade chef' for his achievement. Of course, this makes the other resident cooking master boy, Sanche, a little jealous.

Sanche, also a young chef in Yang's Spring Restraunt, becomes jealous of Mao's talent and tries to spoil Mao's cooking. However when Sanche is asked by Choyu to chop some vegetables, he is unable to chop them finely (due to a tragic childhood where he was taught to cook by his strict father) and so all the customers become unhappy about the restraunt's cooking. Choyu kicks Sanche out of the restraunt for his poor cooking ability. Sanche runs away and tries to get on a boat to return to Shanghai. Mao stops him and offers to help him in showing his skills to Choyu so he can be cook for the restraunt.

Mao, Sanche and Meili open up a store to attract customers away from Yang's Spring Restraunt. They make 'stir fry capsicum and pork strips', but want to add something else to create a unique flavour. As the night wears on, Meili gets frustrated and kicks a tree, making all the ripe 'chi' (a type of fruit) fall to the ground. Mao gets an idea to use the 'chi' as the special flavour they needed. The next day, Yang's Spring restraunt is empty thanks to the store Mao and the gang made. Mao chops the vegetables, Sanche stir frys the dish and Meili serves it to customers making them the ultimate team. Choyu and Ruoh find out about Mao's store and goes to have a little taste test. They are so amazed at the short amount of time they took to make this new delicious dish that they allow Sanche back into the restraunt. Sanche, happy Mao had helped him, got his confidence back in chopping vegetables and again leaves for Shanghai where his father's restraunt is. Mao tries to stop him after reading Sanche's leave note but is too late.

The annual Guangzhou dumpling festival is nearing, and this year Yang's Spring Restraunt is hoping to win again. However a new challenger has arrived - the Chinese Dumpling Brothers! Choyu breaks his arm after one of the Dumpling Brothers knocks into him and it is up to Mao to win in the festival!

The Guangzhou Dumpling Festival has arrived! The winner is the team who has the most eaten plates of dumplings. An old man wants to try the wonderful Dumpling Brother's dumpling but is told to go away becasue he looked like a beggar. Mao gives the old man dumplings and finds out the man used to be the Emperor's master chef. After this news, everyone flocks to Mao's store to eat his dumplings. When time was up, the plates were counted! Mao and the Dumpling Brothers were equal first with 1242 plates. The judge, under the old man's advice, announces a rechallenge the next day - But different dumplings must be made!

At night, the stronger Dumpling Brother tries to sabotage Mao's indgredients before the dumpling challenge but is luckily stopped by Choyu. Meanwhile, the other brother is quickly preparing his own ingredients for the challenge. The dumpling rematch has new rules: each taste tester gets two balls, a black one and a white one. After tasting each store's food (Mao and the Dumpling Brothers) they put either a white ball (for Mao) or a black ball (for the Dumpling Brothers) into large pots where they will be counted. The Dumpling Brothers make a beautiful prawn dumpling which looks like a dragon. Mao also makes a prawn dumpling which does not look as good but it has one special trick - It can lift its body up! - The 'Rising Dragon' dumpling' You'll have to watch the episode to understand.After the match is over, the large pots are smashed open and they are completely filled with white balls! Mao wins! General Lee arrives and tells Mao that he is now ready to take the Special Grade Cooking Test in Guangzhou.

Mao goes to the large castle which holds the Special Grade Cooking Tests. The tests are held every four years and only one person will pass the test (very strict!). In the first round, the first five people to have their dishes past will go on to the next round. The dish to be cooked is ramen (noodles) and the topic is 'Ramen without an equal' (something along those lines!). While the other cooks have already started, Mao is still thinking of what the topic phrase means. Feiyi - another young talented cook gives him a hint and straight away Mao knows what to cook! Unfortunately Mao forgot a vital ingredient and tells Meili to go back to the restraunt to get it. Mao waits as time goes by fast....

When Meili finally comes back with the ingredients, two people has already finished the noodles and qualified (3 left!). Feiyi makes 'dragon whisker' noodles which shocks the judges and also passes (2 left!). Meanwhile Mao is still making the dough for his noodles and crushing up the secret ingredient - a rock!. A mysterious green hair woman who makes a noodle with bats and scorpians also passes the test. (1 left!). Finally Mao finishes his noodles which do not need soup. He puts his hand up to say he is finished, but another chef beats him to it (because Mao is too short!).

Start a new discussion for Chuuka Ichiban! anime. Please be fair to others, for the full rules do refer to the Discussion Rules page.