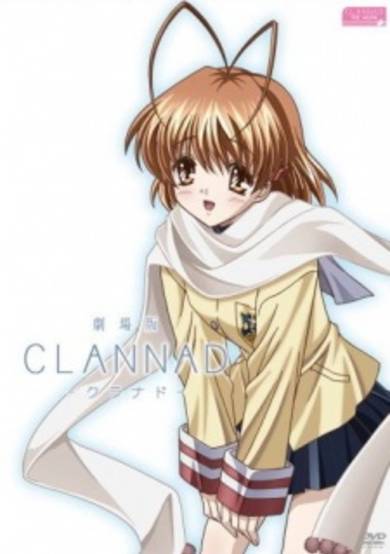 Tomoya Okazaki is a cynical delinquent who lacks ambition as he apathetically labors through high school. During his childhood, a tragedy had caused his father to seek solace in alcoholism and neglect his son. Yet, meaningful human interaction can be a benediction, as Tomoya learns when he meets the enigmatic Nagisa Furukawa. The odd girl offers a gesture of friendship to Tomoya, but he rejects the request, dismissing it as a trivial incident. However, as he soon realizes that he is encountering Nagisa more and more often during school, Tomoya drops his discompassions and befriends the girl. When he learns that Nagisa's dream is to revive the Drama Club, Tomoya decides to shed his detachment from the ordinary pleasures of life and dedicate himself to helping his new friend achieve her ambition. But what starts as a simple friendship may progress into something far more deep, intimate, and life-changing. As the pair face various hardships and afflictions, Tomoya and Nagisa gradually come to terms with the challenges of life. [Written by MAL Rewrite]
User Count11645
Favorites Count55
Start Date15th Sep 2007
Next ReleaseInvalid date
Popularity Rank1019
Rating Rank5120
Age RatingPG
Age Rating GuideTeens 13 or older
Subtypemovie
Statusfinished

Honestly this movie is something you should watch If you're bored after watching the anime. I mean it sort of follows the main heroine route, but its so rushed because of the fact it's only like a little over a hour and a half. This leads to almost no development in the characters. In my opinion there wasn't enough tear jerking moment in this movie compared to the anime series. The movie is around a hour and half so you can only fit so many things within a hour and a half interval without making it rushed or uneven. The art for this movie is... horrible compared to the anime series. A good example is comparing the quality 480p and 1080p. The movie was a 480p, while the show was a 1080p. This was a big drop from the previous work. The character design stayed relatively similar except between Tomoya and Yoshino. Like myself I love the OST from the anime series and do own it, but the movie OST disappointed me... I enjoyed maybe 1 or 2 of the music it played, so any Anime OST lover will be very disappointed in the dreadful OST of the movie. The movie wasn't all bad... it had its ups and downs. I sort of enjoyed the Clannad movie because it kinda had more comedy than the anime series. All the characters had a slight different personality which made it a little more interesting. Tomoya is more a jerk in the movie. Nagisa, who in the anime is very timid, is more outgoing in the movie which is a totally opposite. Overall as a Clannad lover, it was just barley manageable but still enjoyable.

If you've watched the show this is for the most part, spoiled, well not really spoiled its.. its.. i don't know how to put it. I guess you could say completely different, yet the exact same thing, you know what will happen, but not how. Characters are different apart from a few (Nagisa, Tomoya, etc...). It tries to do what clannad did in two seasons and it did not fail. You will cry unless your heart is a brick.

MICRO/NO-SPOILERS: This is my first review of anything on here; so this is going to be extremely poor however I wanted to voice my opinion. The story loosely follows the original anime series and scratches the sequel a little too; the chronological order fits for the movie and the series however it's missing too much, yet at the same point it does somewhat explain the connection between the two main characters a bit better than the original series did. Overall, I'd consider it a 'Too long; Didn't watch' version of the original series, you'd be stupid to watch this and then the series.

It's an older take on CLANNAD, and it's pretty heartwarming. Not as good as the TV show, but nice.

For some reason, this movie feels like a cheap rip-off of the original series, with too many unnecessary effects and terrible character development.

Start a new discussion for Clannad Movie anime. Please be fair to others, for the full rules do refer to the Discussion Rules page.