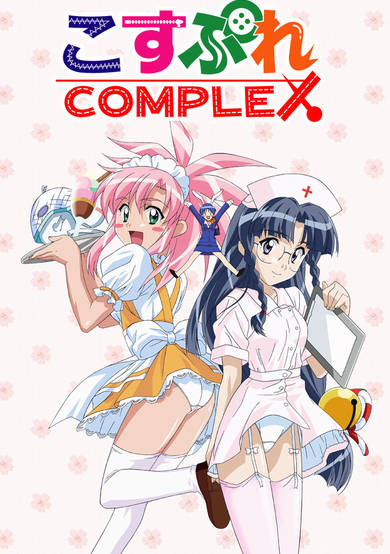 Meet Chako and her friends from the Cosplay Association at East Oizuki Academy! They're the hottest new cosplay team in Japan...fresh from a winning streak of local battles, they're set to sweep the Cosplay World Series! Yeah, right. In reality, Chako and her friends are barely able to keep their club alive at all. Feeble club membership and a lack of sponsorship might be the end of their cosplay dreams before they can even start. But don't you dare underestimate this group of spunky girls! They'll survive a barrage of pervy newcomers, cosplay rivalries, costume disasters and dating mishaps in order to reach their ultimate goal of competing in the World Series. The clothing flies as the girls suit up (and strip down) for Cosplay Complex! (Source: DVD Back Cover)
User Count1034
Favorites Count0
Start Date25th May 2002
Next ReleaseInvalid date
Popularity Rank4734
Rating Rank9510
Age RatingR
Age Rating GuideMild Nudity
SubtypeOVA
Statusfinished

Cosplay Complex is an OVA series that was set up to have a sequel, but never got one. And that's okay, there wasn't very much you could do with it anyway, it already seemed like they were running out of ideas during just these 3 episodes, because all of them are about a contest, that's it. The story of this series is about a high school Cosplay club, and they add some new members every now and then. There are some rivalries, a love interest, ecchi, and lots of cosplaying. The art is pretty good, it's definitely not the standard, especially for an OVA, I could be wrong, but I don't even think it was the standard in 2002, unless anime has really come a long way in just 9 years, it's amazing. It's not annoying and it definitely will not bore you. The music is almost non existent, and the ending theme reminds me of something Nobuo Uematsu would have composed for a happy go lucky show, but that's not a bad thing. The seiyuu all do a great job! I especially like whenever Delmo speaks, but that's probably because of my love for Gintama. Character is very basic here, nothing special, but it's there. I enjoyed this more than I expected, but for it to be something by Tatsuyuki Nagai, he has definitely come a long way when it comes to directing. Sometime you can't judge a book by it's cover, or someone's first publish. Only time will tell when it comes to greatness. It is overall a show that can be fun to watch if you like and like cosplay. Be aware that this show was set up for a sequel, so things at the end do not make sense, and they never will (Unless someone really wants to do another sequel.)

Start a new discussion for Cosplay Complex anime. Please be fair to others, for the full rules do refer to the Discussion Rules page.