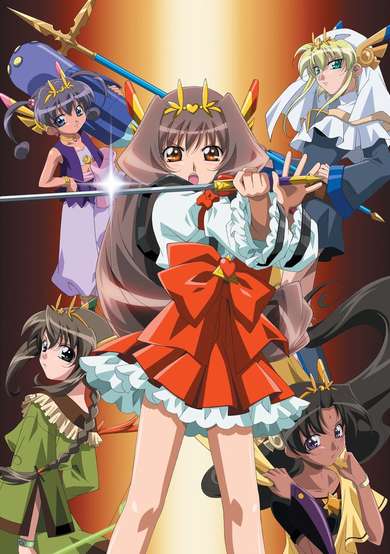 Koto unknowingly seals away the Sun Goddess Amaterasu, and now she is in a different world and can't return. Meeting priestesses who combat the evil in this strange place she learns that Black Towers throughout the land keep Amatersu sealed away and are guarded by evil monsters. Koto must now find a way to help defeat these monsters and return the world to the way it was. (Source: ANN)

Red Impact/Rebirth of the Dark

Behind the Crimson Solitude / Mystic Tremble in Silver

I'm a guy who prefers anime to be relatively fast-paced.  Anime such as **Mushishi** are near-perfect for me because of the slow pacing - I still enjoy them, but I wish that they had a faster pacing.  However, I never pictured myself encountering an anime where I said "STOP THIS TRAIN, I WANT TO GET OFF!" right before I jumped off said train (or rather, I ended up dropping it). I will say ONE good thing about this anime: I now understand why some people dislike **Baccano!**, because this show seems like what would happen if the staff behind **Baccano!** made every mistake that they could possibly make. I would normally start my review off by giving a summary of how the story starts off.  But I am using a Get out of Jail Free card here, because I legitimately have no idea what happens.  So you're out of luck.  But you shouldn't watch this anyway. The animation isn't terrible - it kind of reminds me of **Master of Martial Hearts**, but it's not as atrocious.  The constant fanservice was not very arousing (I wasn't expecting god-tier fanservice like you'd find in **Sekirei** - yes, I have a quality scale for fanservice, and I don't think it's stupid; but I certainly wasn't expecting it to be in the form of scenes suggesting rape/have rape about to happen).  It's kind of forgettable, to be honest. The sound is just bad.  There's no need to sugarcoat it.  It's got unremarkable music, bad voice acting, and no sound effects.  I can't really think of anything that's good about the sound. For our cast of characters, we have Natsumi Yagami, our main character, and a cast of supporting characters that ranges from- No, I'm kidding.  That's it.  Natsumi Yagami represents a nervous genki girl (if that's possible).  The rest of the cast is bland and forgettable.  The latter term describes this anime perfectly. If you want a good ecchi anime with some action, just go watch **Sekirei** or **Freezing** - trust me, you will not regret the time you spend on those series.  Plus, both are licensed by FUNimation - so if you like one, you don't have to go far for the other.

Start a new discussion for Chou Henshin Cosprayers anime. Please be fair to others, for the full rules do refer to the Discussion Rules page.