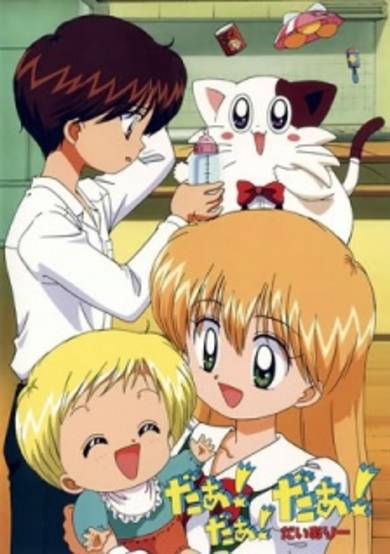 Miyu is an 8th grade girl, whose parents have been hired by NASA. They take off to America leaving Miyu with Mr. Saionji. Later, Mr. Saionji decides to go on a 1 year long trip to India leaving Miyu alone with his son, Kanata. More complications rise when an Alien baby and his babysitter pet crashes/lands in their house. To make things worse, alien baby starts calling Miyu and Kanata Mom and Dad, also showing ESP power and floating around. (Source: ANN)

Suddenly 4 People in the Family?!

Miyu Kōzuki's parents had moved to the United States to work for NASA. Miyu has been told she is to live with her parents' old friend. She arrives, and it turns out to be a Buddhist temple. She meets her parents' friend, the temple monk, Hoshou Saionji, and his teenaged son, Kanata. The monk soon leaves for India for religious training, leaving Miyu behind with Kanata. Shortly after, a UFO flies into the house, and inside were an alien baby called Ruu and a "sitter-pet" called Wanya. They all then decide to live in the temple together. Kanata peeps at Miyu while she's showering, just as Miyu has seen him changing.

Ruu-kun is Climbing the Chimney

It was Miyu's first day at her new school. She finds out that Kanata has a fan club, and he is the class president. Miyu meets Christine Hanakomachi, a half-French girl who fancies Kanata. During class, Miyu spots Ruu flying outside. Kanata and Miyu chase after Ruu. Ruu ends up climbing a chimney, forcing Kanata and Miyu to climb it too.

Chris and her friends came by Kanata's house to have a welcome party for Miyu. But their home turned out to be a disaster. They needed to take down floating items and hide Ruu and Wanya from their guests. Chris misunderstands Miyu and Kanata's relationship, after they discover Ruu.

Momoka and the Necklace

Kanata and Miyu both go out with their friends. Before Miyu leaves, she notices that her necklace is missing. A crow has taken it. But 3 year-old Momoka chases the crow away and retrieves the necklace. While shopping for dinner, Wanya loses Ruu. Ruu finds Momoka with the necklace. They both are together, when finally Kanata and Miyu find Momoka and Ruu. Momoka starts referring to Ruu as her boyfriend.

Mama Comes Over on Mother's Day

A Date in the Park Between Cousins

This was good and interesting . I like the characters and the plot i would watch it again. At first i wasn't expecting much out of this anime but then it shocked me. The different characters, the plot and Ruu

if you are into romance, aliens and jealousy of girls this is a must see anime. one day miyu is sent to live with kanata since miyus parents are going to america to get ready to go outter space. all of a sudden kanatas father leaves for a one year trip leaving kanata and miyu living together. on the same day a baby alien and his sitter pet arrives and crashes into kanatas house miyu and kanata suddenly have to look after a baby alien called ruu and a sitter pet called wanya. all is well till miyu befriends chris. chris is in love with kanata and is easily jealous if another girl talks to him. in the last episode near the ending they end up married kanata and miyu. also ruu and wanya come back and vist miyu and kanata

Start a new discussion for Daa! Daa! Daa! anime. Please be fair to others, for the full rules do refer to the Discussion Rules page.