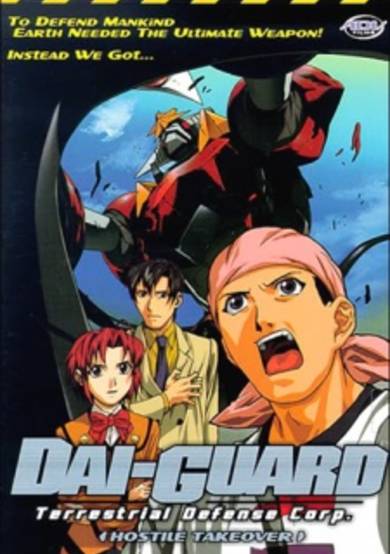 Disaster from the Sea

Twelve years ago, Japan was attacked by a Heterodyne, a mysterious monster that seemingly appeared out of nowhere. In response, 21st century Security built a giant robot called Dai-Guard to combat the Heterodyne, but by the time it was ready, they had disappeared again. Turned over to the company's PR division, Dai-Guard has since become little more than a tourist attraction. However, when the Heterodyne reappear, PR Division worker Akagi Shunsuke is insistent that he and his co-workers should pilot the robot for the purpose it was meant for. But can a trio of untrained office workers really hope to save the world in a cheaply built old robot?

The Fort at Night

Against the wishes of both the Army and 21st Century Security, Akagi and the rest of PR Division decide to help those hurt in the Heterodyne attack by flying them to a hospital. As if dealing with army and company politics wasn't enough, the situation only gets worse when the Heterodyne resurfaces for a second attack.

Circumstances of a Hero

The fighting may be over, but the paperwork is just beginning, as damage claims and lawsuits related to Dai-Guard's last mission start piling up. Whilst the rest of PR Division 2 buckles down to tackling the economical fallout, Aoyama decides that he wants nothing more to do with Da-Guard, and quits his job. Will Dai-Guard be able to defend against further Heterodyne attacks without its engineer?

With rumors flying around about a new division being created to take charge of Dai-Guard, the team decides to demonstrate that they are the best people for the job. Ordered to capture the next Heterodyne instead of destroying it, the pilots head into battle under the watchful eye of their new tactical advisor, Agent Shirota. And Ibuki especially feels she must prove her worth after her father asks her to quit.

Faced with the prospect of having to turn Dai-Guard over to the army, Akagi becomes determined not to make a single mistake. The trouble is, it seems like no one on the team can do anything well enough to satisfy their tactical adviser, Agent Shirota! But with the next Heterodyne headed for a nuclear power station, it becomes more important than ever that everyone pulls together before a major disaster occurs…

News of the rebuilding of the old park sparks Ibuki's old memories of playing there with her father. Is this just a long flashback, or will her recollections come in handy in the battle against the latest Heterodyne, a creature that erases everything it comes into contact with?

Things get boring for the team when they are forced to go on standby for a week after a mushroom-shaped Heterodyne with regenerating abilities appears. But events only take a turn for the worse when the Heterodyne activates and starts creating smaller mushrooms that destroy the surrounding city. Can the genius head of the Tech Division figure out this Heterodyne's weakness? And how can Dai Guard even go into battle when main pilot Akagi is off saving a trapped dog?

It's a day free from Heterodynes, but certainly not free from tension. Whilst Ibuki is beginning to snap under the strain of the constant combat alerts, Aoyama is skipping work to make some private phone calls, and Akagi is just getting on everyone's nerves! Maybe Shirota and the army are right, and civilians just shouldn't be piloting Dai Guard at all…

Dai-Guard finds itself in trouble when a balloon type Heterodyne shows up. Not only does the giant robot find it hard to manoeuvre on the grassy terrain, but the Heterodyne keeps slipping out of its hands! Can Dai-Guard defeat the creature before it destroys a nearby dam and floods the surrounding area? But more importantly, has Tanigawa really gone on a date with Ijuuyin?

Wages that Correspond to Justice

With Shirota's help, the army has built Kokubogar- a brand new giant robot that they hope will replace Dai-Guard and end the days of civilians saving the world. Determined to prove that their robot is still the best, the Dai-Guard team agree to compete against Kokubogar in a kind of "Giant Robot Challenge". But with Akagi ill, the other pilots distracted by personal problems, and Shirota now back with the army, do they have any hope of coming out on top?

Start a new discussion for Chikyuu Bouei Kigyou Dai-Guard anime. Please be fair to others, for the full rules do refer to the Discussion Rules page.