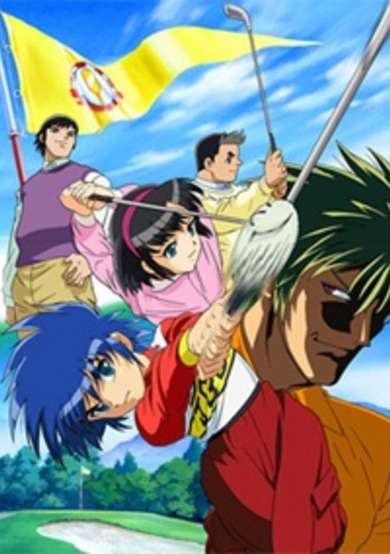 Dandoh was playing a baseball game with friends Yuka and Kohei and hits a wild fly ball which crashes into the principal's potted plants. Rather than getting mad, the principal admires Dandoh's swing and introduces him to the world of golf. It's now an adventure in golf as Dandoh is under the watchful eye of a former pro-golfer. They enter a tournament together and play for a shot at the national championships. (Source: ANN)
User Count366
Favorites Count0
Start Date3rd Apr 2004
Next ReleaseInvalid date
Popularity Rank7189
Rating Rank5131
Age RatingG
Age Rating GuideAll Ages
SubtypeTV
Statusfinished

Most sports anime drag. Often. That's why I hate them. But it's not every day you see an anime about golf...actually, this is pretty much the only one in existence. That has to make you wonder if you should pick this one up or not. I think you should.  Story. It follows the story of a boy everyone calls "Dan Doh!" who wants to be a baseball player. He's maybe about eleven (he's a fifth grader) when he swings his baseball bat, however, he breaks the principal's windows. Rather than punishing him, he notices that he real well...swing, and introduces him to the world of golf. This anime follows a big golf tournament over the course of ~24 episodes. The last two are kind of an "afterwards" sort of thing. The story is okay. You learn a lot about golf when watching this anime. It doesn't really drag at all. The story takes a course of maybe over a four day tournament. I really do enjoy the story since golf anime are nearly non existent. Goes to show you how little popularity golf must have in Japan. The animation is very typical in its time, to be honest, no comment. Both the sound and sound effects as well as the OSTs are fine. No comment there. The characters all have a very competitive feel to them. I definitely like that about them. The side characters that aren't part of the game are also dedicated. I also kind of like that. Though, there isn't really much character development, lmao. Anyway, this is a fun anime and the only one in the world about golf. You should give it a try.

well its your very basic sport shounen I just finished watching Dan Doh!! which is a 26-episode sports anime about golf. GOLF. Well... The series is the typical prodigy story. A boy suddenly realizes he excels in the sport - so much that he is able to beat people who have been doing the same thing for a lot longer than he has. It helps that he has the backing of not one, but two, ex-golf pros. Oh yeah, did I mention that his father was also a secret amateur golfer who has unexpectedly (and still unexplainedly) quit the sport? Like we haven\\'t seen that before. Animation-wise, it was a bit old-fashioned for my taste and there was nothing that spectacular about it. Sound - it was all about the \\"sonic booms\\" of the drives and the \\"clink\\" of the ball when it goes into the cup. The only character development is ALL the characters, except for one, turns good from being bad the first time we see them. The whole series is just too... nice. But Dan Doh!! is still enjoyable and entertaining in its own way. I would have liked to see more of what happened to Dan Doh, his friends, and if he ever went to bigger things in his golf game

Start a new discussion for Dan Doh!! anime. Please be fair to others, for the full rules do refer to the Discussion Rules page.