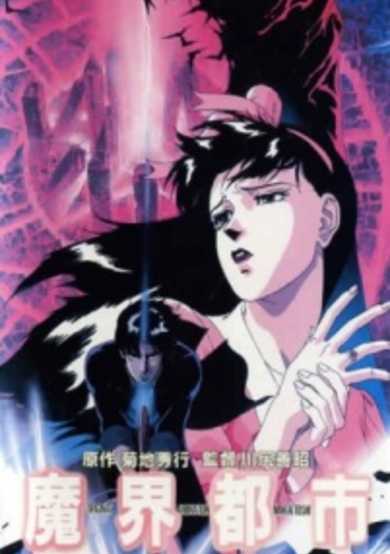 Kyoya's father was a great warrior, killed at the hands of the diabolical psychic, Rebi Ra, who has now opened a portal to hell in the city of Shinjuku. It falls to Kyoya to finish what his father started and battle his way through demons, while protecting a young woman from harm. The only problem is that he's not exactly your classic hero type, and his powers are still latent. (Source: ANN)
User Count1297
Favorites Count3
Start Date25th Oct 1988
Next ReleaseInvalid date
Popularity Rank4299
Rating Rank9849
Age RatingR
Age Rating Guide17+ (violence & profanity)
SubtypeOVA
Statusfinished

\[Old review is old.\] Demon City Shinjuku (or just Monster City) is a treasure. So rare does anime pass the threshold of being so amazingly awful to the point of achieving genuine hilarity instead of being utterly wince worthy, and we’ve got the perfect example for you here today. The story is too simple to behold. Bad guy with supernatural powers kills good guy with supernatural powers. The son of the good guy learns those powers, and with the help of a gentle girl he also learns about compassion. Then he kills the other guy with powers. Anything extra is purely pointless. A waitress that the protagonist hits on makes him oh so charming and relatable. He has trouble with deeper ideals and his ancient master tells him to find it out on his own. The girl travels with the guy to find the bad guy and needs constant protection and security, but she’s nice and shit so she’s still needed. A woman who scams them is killed by a spider thing. A little Mexican on roller skates leads them throughout town but gets separated and isn’t important ever again. A mysterious man named Mephisto observes the protagonists and doesn’t do anything. A monster woman tries to have sex with Mephisto and he kills her after she tries to kill him. Other monsters come and go. The bad guy’s plan to exert power on the world obviously doesn’t come true. The story is so nothing that it hurts. A villain in a threatening setting, a good guy comes to stop him. Along the way he learns about harnessing true power and grasping compassion, but the film even brushes over those aspects by merely mentioning them haphazardly. The hero isn’t too particularly likable, the villain isn’t relatable, and the girl is a complete bore, while all of the side cast gets shafted. There isn’t anything beyond the straightforward story, and when all of that is predictable and overused there’s really nothing left to say. I hate to give any merit to this thing after that paragraph, but the animation is pretty decent. There’s enough fluidity and expression to be a convincing artistic portrayal of the setting and the story’s action, even though everything else is completely unconvincing of anything. I hate to sound like a broken record when talking about these cheaper 80’s anime movies, but the creatures really did have some cool designs and the animation was fluid when they wanted to depict their awesomeness. The character designs are boring as sin (even racist at times), and nothing about the setting or the magic was noteworthy at all. Though the biggest kicker is that this thing was made in 1988 in the shadow of things like Akira, Totoro, and Grave Of The Fireflies, and that sheds light on why this early Madhouse animation isn’t remembered in the least. While this is easily one of most atrocious dubs I’ve heard, it is also one of the funniest. I speak the truth when I say that I highly recommend watching this thing dubbed because it is a riot. The lead nonchalantly curses at the drop of a pin, the overblown accents guarantee laughter, and whoever scripted the adaptation had to have been stoned off of his ass from what I saw before my eyes. None of the voice actors sound invested in some semblance of realism, resulting in an endless stream of cheese and corn that is intoxicatingly hilarious. An abundance of 80’s synth drum music only amplifies this enjoyment in the long run. Nothing in this show warrants an attempt at serious investment from the audience, so do yourself a huge favor and listen to this hysterical localization, even if it’s only for the absolute worst closing line I’ve ever heard. The majority of intentional anime comedies could not have me laughing harder than I did watching Demon City. Don’t get me wrong, it is bad, it is a significant anime achievement in bad, but bad can be highly enjoyable and that credit doesn’t go to the filmmakers. If you’re looking for something good where you can accredit appreciation towards animators and writers, search somewhere else. Otherwise, enjoy the bad accents and 80’s dreck. <u>Demon City Shinjuku (1988)</u>\: 2.6/10

Start a new discussion for Makai Toshi Shinjuku anime. Please be fair to others, for the full rules do refer to the Discussion Rules page.