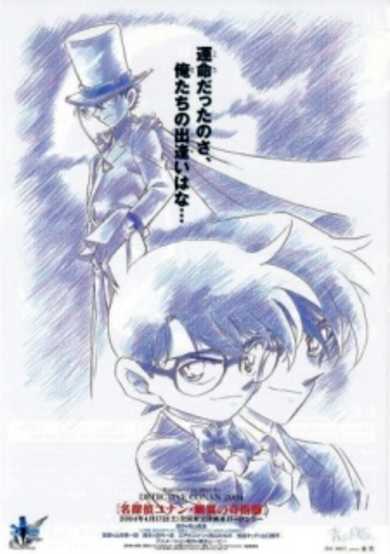 Kaito Kid strikes again in this new annual installment of the Detective Conan movies. An actress asked for Mouri Kogoro to protect a precious jewel of hers which Kid has vowed to steal. On the day of the theft, Kaito Kid dressed up as Shinichi and matched wits with Conan, and fled in the end. To thank them, the actress invited Kogoro and family and friends to Sapporo, but a bigger scheme, and a great emergency is just about to unravel high above the clouds in the plane that they're taking... (Source: ANN)

This is a good film, but the pacing and plot has always been a bit strange to me. The first half is quite normal, where the killer has to be found. The killer is revealed at around halfway, and the second half takes place on an airplane where the pilots are sick and the plane must be landed safely. The way the film was made is bit strange, but the story is still very satisfying and intense. In the end, the plots sort of connect so it is executed quite well. If you can look past this odd plotting, the film is very good. There are plenty of memorable scenes, especially in the second half, and there is good character development. My only other complaint would be that the culprit is not particularly threatening so it may be a slight letdown to some viewers, but the story is very clever nontheless.

Start a new discussion for Detective Conan Movie 08: Magician of the Silver Sky anime. Please be fair to others, for the full rules do refer to the Discussion Rules page.