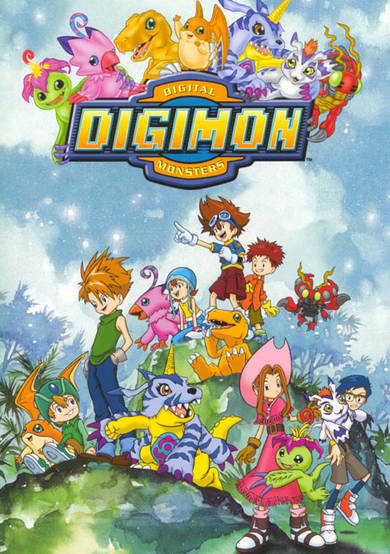 When a group of kids head out for summer camp, they don't expect it to snow in the middle of July. Out of nowhere, the kids receive strange devices which transport them to a very different world to begin their Digimon Adventure! Led by the plucky Taichi Yagami, the seven children must now survive in a realm far from home, filled with monsters and devoid of other humans. Luckily, they're not alone: each child is paired off with a companion digital monster called a Digimon. Together, the children and their new friends must overcome their insecurities, discover their inner strengths, and evolve into stronger fighters - literally. A force of evil is spreading through the Digital World, corrupting all the Digimon. The DigiDestined have arrived and it’s up to them to save the Digital World, if they ever want to see their home world again.
User Count21784
Favorites Count396
Start Date7th Mar 1999
Next ReleaseInvalid date
Popularity Rank509
Rating Rank1434
Age RatingPG
Age Rating GuideChildren
SubtypeTV
Statusfinished

While at camp, Tai, Matt, Sora, Izzy, Mimi, Joe, and T.K. come across seven Digivices and are transported to a strange Digital World where they make friends with creatures called Digimon who claim to be their chosen partners.

The Birth of Greymon

The kids come across a beach with numerous phone booths, but none of them seem to work. As they sit down for a break to eat, a wild Shellmon appears and attacks the kids. Agumon digivolves into Greymon and blasts him away into the ocean.

The kids run away from a Monochromon battle. They come across a trolley car on a small island and decide to spend the night in it, until they are attacked by a Seadramon.

The kids come to a Yokomon village to rest for the evening. A Meramon attacks the village and Biyomon digivolves to Birdramon to defeat him, causing a Black Gear to be expelled from his body.

The kids stumble upon a factory where they find an Andromon in trouble. After they help him he attacks them. Izzy discovers coding, which he uses to digivolve Tentomon into Kabuterimon.

While escaping the Numemon who attacked the group in the sewers on their way out of the factory, the kids are split up and Mimi ends up in Toy Town after being attacked by a Monzaemon.

Tai and Matt argue whether they should climb Infinity Mountain. Joe and Gomamon decide to climb the mountain by themselves. While on the mountain, they are attacked by a Unimon.

The kids meet the ruler of File Island, Devimon, the controller of the Black Gears. He, Ogremon and a possessed Leomon, attack the kids who manage to escape, but Devimon breaks File Island into multiple, smaller islands and separates the kids onto them.

Tai and Agumon land on a snow-covered island and are forced to defeat a Frigimon. After destroying the Black Gear they cross over to the island where Matt and Gabumon landed and find that Matt got hypothermia.

A Clue From the Digi-Past

Mimi and Palmon escape Sukamon and Chuumon and cross over to the next island where Izzy and Tentomon landed, but end up getting lost in a labyrinth and attacked by Centarumon.

Story: Digital monsters in a digital world. A bunch of kids get caught in the digital world and all end up with their own digital monster. The kids venture forth and solve various problems of this digital world. I watched this when I was young and loved this over pokemon. Animation: Remember it being better than it actually was, but its still good. Sound: Digimon digital monsters champion. Nuff said to me this is classic childhood nostalgic. Characters: This show was all about the various digital monsters. The human characters were kind of just there. My favorite when I was a kid was Augumon, who basically is a t-rex. Enjoyment: The digital monsters were always fun and couldn't wait for the next one. And they all had there own unique transformation. The fights between the monsters was always fun and the villains were always fun in there own way. Overall: I would suggest anyone recommend this to any kid under the age of 12. A great entry into anime for a kid. Digimon digital monsters champion. I thought this was better than Pokémon. 7/10

Now I could waste half of this review arguing why Digimon isn't a Pokemon rip-off, but instead, I'm going to treat this review (Poke-what?) like I would any other anime review. Mainly because I have so much to cover, having seen both versions of this series. I have had the fortunate opportunity to view both the American dub and the original Japanese, and I have favorable opinions of both of them. Sure, the dub "Digimon--Digital Monsters, Digimon are the CHAMPIONS!" is VERY VERY grating and nearly unbearable to sit through. Thank God nothing of great importance happens during those moments. (It's so easy to fast-forward the American theme song and the "Digi-volving" scenes. No big deal.) The Japanese background music is, to no surprise, far better than the Saban dub-overs, but what makes the dub so redeeming that the background music is forgivable is, actually, the voice acting. What starts out as rusty voice work quickly develops into phenomenal acting as the voice actors (especially Michael Lindsay (Joe) and Joshua Seth (Tai)) gain a better feel and appreciation for their characters. Very little was changed in the actual plot of Digimon, so I will speak on it as though they are one and the same. What makes Digimon such a great series, in my opinion, is the variety and poignancy of the issues that these children deal with. We don't have the angst that comes with teenagers in love, nor do we have the violence of adult drama. Each child has a unique personality, and realistic ways of coping with problems at home. Some of the problems the children are facing are shocking to begin with, but then we realize that it is those troubles that have shaped their character and their irrational behavior upon their arrival into the Digital World. The struggles we find are older brothers' senses of responsibility to their younger siblings (rivals Taichi and Yamato are both older brothers with chosen younger siblings...and how they handle their sister and brother is characteristically different--yet still similar), struggles with parents (Sora and her mother fight often, thus leaving Sora feeling superficially loving, when she harbors such bitterness), feeling of belonging (Koushirou, the boy genius, has a strong, loving relationship with his parents, only to realize that they stress over the fact that he was adopted after his parents were killed in a car accident), and acceptance. There is such a wide range of characters in Digimon, I find it hard to believe that anyone who watches the series wouldn't be able to sympathize or relate to at least one of the children. Additionally, what makes Digimon so profound is that the Digimon that befriend the children have as distinctive personalities as their children counterparts. For someone who has never had an appreciation for anime mascots, my infatuation with the seal-like Gomamon brinks on the rim of being unhealthy. What begins as a story of survival and adventure gradually turns into one of coming-of-age and self-discovery. Digimon is a heartwarming anime that introduces characters and relationships that are, as I see it, timeless and nostalgic. It sparks the imagination, and makes you appreciate the value of friendship and teamwork ... like any good Japanese program should.

This is the first anime I saw and re-watching this several years later and all other Digimons brought me into Anime world.

pokemon but with a storyline and character progression. what more could you want

I've watched this anime when I was like.. a kid.. probably 8 or 9 (Look, Idc if you prove that I'm probably 69 years old if I watched this).. So, I don't remember a lot but I remember watching this everyday on an anime channel when I was still in Asia (Animax to be exact). So, the story is.. I don't remember, but I'm pretty sure they wanted to get out of the Digiworld and maybe save the Digimons on some kind of danger. IMO, Digimons are way more cooler than Pokemon (Yes, I've watched the original Pokemon <u>recently)</u> . Digimons can talk and evolve into some gundam thingy. Pokemon, on the other hand, cannot talk and cannot devolve. Now, the animation is something you don't need to complain about. Digimon has like the same style as the original Pokemon so... yeah whatever. The character development... Look, I don't remember much on this anime but I remember shipping Joe and Mimi (so cringy af). And yeah, I enjoyed this anime. I'm glad I watched this. Thank you, Digimon.

Start a new discussion for Digimon Adventure anime. Please be fair to others, for the full rules do refer to the Discussion Rules page.