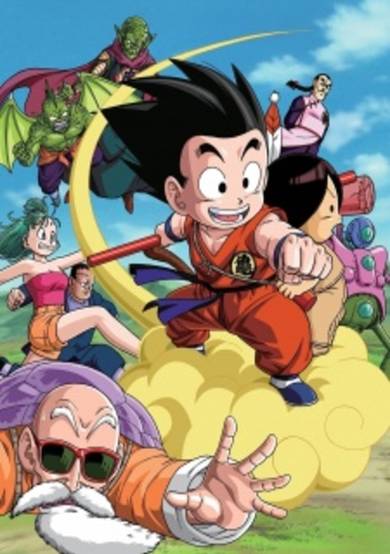 Gokuu Son is a young boy who lives in the woods all alone—that is, until a girl named Bulma runs into him in her search for a set of magical objects called the "Dragon Balls." Since the artifacts are said to grant one wish to whoever collects all seven, Bulma hopes to gather them and wish for a perfect boyfriend. Gokuu happens to be in possession of a dragon ball, but unfortunately for Bulma, he refuses to part ways with it, so she makes him a deal: he can tag along on her journey if he lets her borrow the dragon ball's power. With that, the two set off on the journey of a lifetime. They don't go on the journey alone. On the way, they meet the old Muten-Roshi and wannabe disciple Kuririn, with whom Gokuu trains to become a stronger martial artist for the upcoming World Martial Arts Tournament. However, it's not all fun and games; the ability to make any wish come true is a powerful one, and there are others who would do much worse than just wishing for a boyfriend. To stop those who would try to abuse the legendary power, they train to become stronger fighters, using their newfound strength to help the people around them along the way. [Written by MAL Rewrite]
User Count49480
Favorites Count1066
Start Date26th Feb 1986
Next ReleaseInvalid date
Popularity Rank151
Rating Rank477
Age RatingPG
Age Rating GuideTeens 13 or older
SubtypeTV
Statusfinished 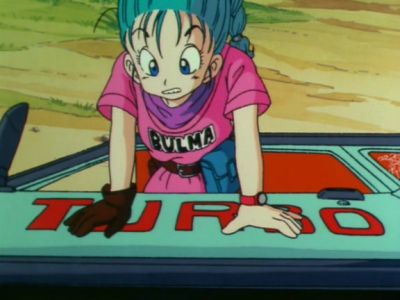 Goku, an orphan living in the mountains, is out fishing when he meets Bulma, a young girl searching for the seven Dragon Balls, which, when gathered together, grant a wish. Goku's grandpa gave him the four-star Dragon Ball before he died. Needing this ball for her collection, already possessing two balls, Bulma decides to let Goku join her search. They take off on a motorcycle, but Bulma is suddenly grabbed by a giant flying dinosaur. Goku hits the monster with his power pole and rescues Bulma. 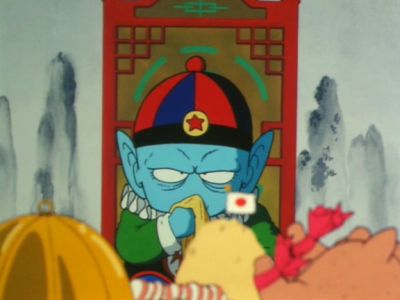 Goku and Bulma set up a shelter to sleep in. At night, Goku goes out looking for some food. He sees a ship fly overhead, and, thinking that it's a bird, goes running after it. The ship belongs to Mai and Shu, who are servants of Emperor Pilaf. The Emperor is also looking for the Dragon Balls. Goku saves them from wolves, and heads back. In the morning,he finds a giant turtle who is looking for the sea. Goku volunteers to take him there, so he picks up the turtle on his back and begins running, with Bulma following on her motorcycle. 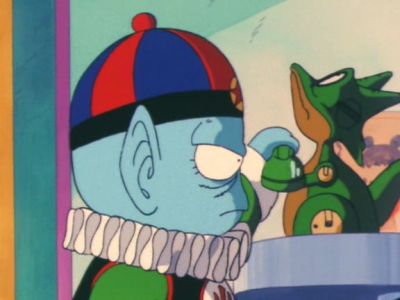 On their way to the sea, Goku and Bulma run into a Bear Thief that tries to eat the turtle. Goku makes short work of him, and they continue on their way. When they arrive at the shore, the turtle tells them to wait for him. When he comes back, a man is riding on his back. The man is Master Roshi, and as a reward for helping his turtle, he gives Goku his flying Nimbus Cloud. Roshi himself can't ride the cloud, because only good and pure people can. Bulma can't ride it either, but Goku can. Roshi also gives Bulma the three-star Dragon Ball, not knowing what it is. When Master Roshi returns to his island, he finds Emperor Pilaf and his two henchmen searching his house for the Dragon Ball. After he tells them that he gave it away, the three leave his island. 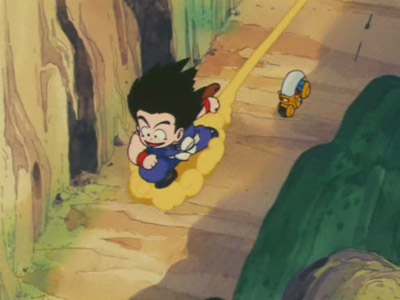 The dragon radar leads Goku and Bulma into a remote village. They find that the village is being terrorized by a shapeshifter named Oolong. An old woman in this village has the six-star Dragon Ball, and she agrees to give it to them if they drive Oolong away from their village. Oolong wants to marry a girl in the village, so Goku dresses up like her to trick Oolong. When Oolong discovers this, he gets very angry. To protect his identity, he reverts back into his original state after he transformed and runs away from the village. Goku follows, and eventually catches him. With the village saved, the old woman gives them the six-star ball. 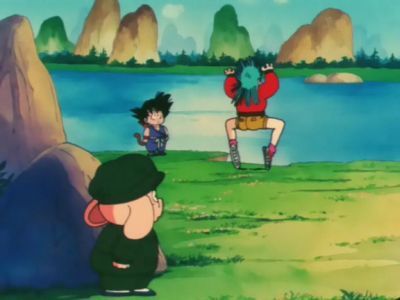 Bulma and Goku continue their quest for the Dragon Balls with Oolong (Bulma brought him along thinking his shape-shifting abilities might come in handy). But the next Dragon Ball lies beyond the Diablo Desert. Oolong is terrified, for he knows that the Diablo Desert is home to Yamcha, a fearsome bandit who possesses the awesome power of the Wolf's Fang Fist. Can our friends make it through the desert to their destination? 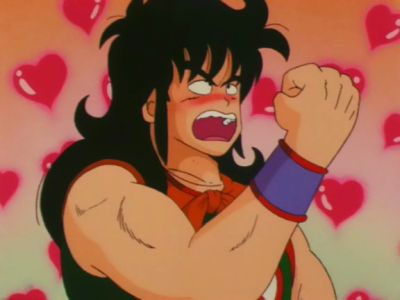 While Bulma, Goku and Oolong recover from the ordeal of acquiring five Dragon Balls, Yamcha and Puar try to steal them out from under their noses so that Yamcha can obtain his own grandiose goal. But they're not the only ones after the Dragon Balls! Oolong wouldn't mind having the Dragon Balls, and Emperor Pilaf's henchmen are closing in as well. 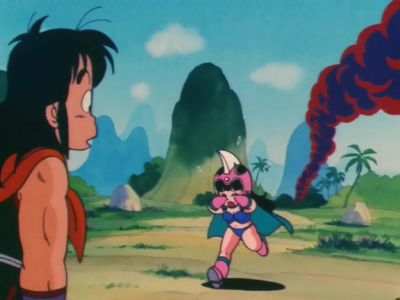 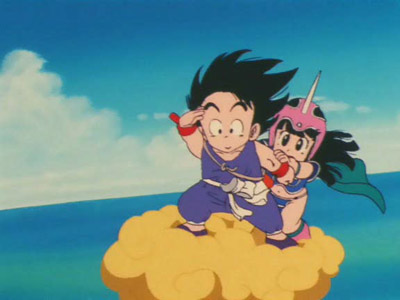 Master Roshi, who appears to be a wise but feeble old man, reveals that he is a master of the "Kamehameha" an ancient and formidable force. The power, which he channels through his hands, creates a wave of tremendous destruction that can topple mountains. 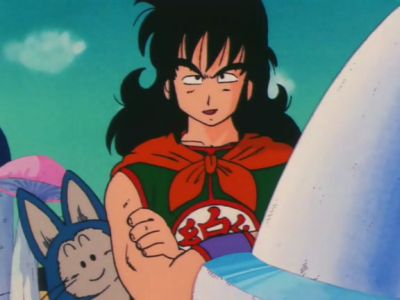 Bulma and Goku's search for the Dragon Balls takes them to a remote village that is being terrorized by a villainous gang, the Rabbits. Before long, Goku and the Dragon Ball Team come face to face with two of the Rabbits, and Goku must fight to protect his friends. Can he protect them from the surprises Monster Carrot has in store for them? 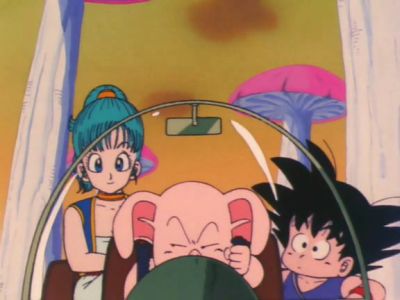 The Dragon Balls are Stolen!!

The Dragon Ball Team races toward the seventh Dragon Ball. Little do they know that their enemies await them. Can Emperor Pilaf be stopped from gathering the last of the Dragon Balls and making his evil wish?

Story: There a few side stories that add to the main theme. Goku the hero of the story looks for dragonballs that can grant one wish a year when gathered. There is also a tournament held every few years, to determine the greatest fighter on the planet, which is held three times in the show. The basic theme of the show is watch goku go from really strong kid to earths greatest hero. Basically watch him get stronger and stronger. I really enjoyed the story of Goku. Animation: Really good for its time. Sound: Some reason I never really liked the opening theme, don't know why. Character: The main character Goku is as honest a hero as you can get. The side characters Krillin, Yamacha, Tien, and Chazu, are the characters that try to surpass Goku in strength but never can. Master Roshi was the old perv master and Bulma was there for occasional fan service. The main villain Piccolo came in two forms, the bad guy out for world control, and later the main rival of Goku. Though this show didn't really develop the characters that much, they were the same as when they first appeared on the show, besides Piccolo. I fell in love with all the characters, besides the mandatory annoying villains. Enjoyment: Great fights. There was a wide enough variety of fights to keep things enjoyable. From one on one fights to one versus and army. Overall: For me this along with DBZ are the grandfathers of fighting and superhero anime. Only knock on show was character development. If you enjoy fighting anime watch this. Though be forewarned you will get addicted. 8/10

Nostalgia at it's finest, Dragon ball is the very first anime I have seen and it shall always remain as one of the greatest shows in shounen history.

i\`ll make this short. This is just a better version of DBZ.

I did watch after DBZ  "a long time ago" but a well done story for a anime of it time. I love the back story on how goku was made as I read Journey to the west and understand the base of it more.  2x watch repeat

**My Dragon ball review** <u>Hi guys and this is my review of Dragon ball This is my favourite anime anyways lets start with the first topic.</u> **Story** <u>So the story of dragon ball was very well made knowing it was inspired from a novel called Journey to the west. So Dragon ball follow's the story of a boy named Son goku as he starts his journey to find the dragon balls but then once they were found Akira Torriyama was left unknown with what to do before making the next chapter so then Goku started training to become the strongest he could possibly become even surpassing "gods" at the age of 10 (not actual gods).This story made me hooked when I first watched it and I kept wanting more and more of it so i'm gonna rate it 10.</u> **Animation** <u>This next topic is hard to compare since it was made back in 1984 and it's not fair to compare it to things like Full metal alchemist or any current day anime's. Instead I'm gonna compare it to one of it's rivals in the 1990's, Sailor moon. Both dragon ball and sailor moon had similar animation and tbh it's like good especially being the 1990's and people still, aren't happy from animation from back then it was bad at times I will admit but overall pretty good so really I'm gonna give it a 7.</u> **Sound** <u>Now I don't know if they mean soundtrack but i'm doing soundtrack. So when I go back and think about the soundtrack, I'm always amazed weather or not it's the openings like Mystical adventures or Find those dragon balls It's such an amazing soundtrack it's addictive in a way you can't really explain so with that it earns 9.</u> **Characters** <u>The characters were interesting,funny,cool even inspiring and since I really have nothing i'm gonna rate it 8</u> **Enjoyment (warning:Opinion in coming)**<u>Now I can only rate this and I cumed over it so I give it 10</u>**Overall** overall i give it a 10

My childhood anime every Saturday morning

Start a new discussion for Dragon Ball anime. Please be fair to others, for the full rules do refer to the Discussion Rules page.