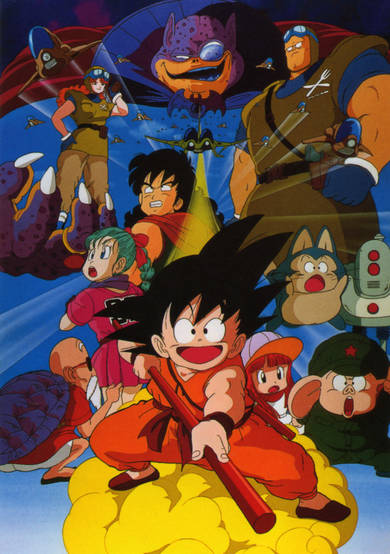 Having seen this movie, I now understand why the Dragon Ball movie "The Path to Power" (which I watched before this one) is labelled as an "alternative version" to the beginning of Dragon Ball - it essentially does the same thing as this movie, but went about it in a different way. Both of them bring some of the core characters of the franchise: Goku, Bulma, the turtle guy and the pig etc (these guys don't even need names to be honest). The production seems to be higher for this movie, as the animation looks clearer, but this could be because I watched a lower quality version of the other movie. The cast isn't too bad overall, I've definitely seen a lot worse. On the positive side of the fence, Goku is a likeable character with all his innocence. On the negative side there's Bulma, who is quite annoying with her stereotypical "annoying highschool girl" voice and attitude. My comments for "Curse of the Blood Rubies" is mostly the same as the ones for "The Path to Power". They share the same dodgy voice acting (along with the rest of the Dragon Ball franchise), and the same mediocre animation and character designs (again, along with the rest of the franchise). What's more, just like "The Path to Power", this movie is also a cut above the average Dragon Ball movie because it puts commendable effort into the story so is not completely centered around the fighting. The result is a vaguely interesting adventure story with battles that doesn't drag on and on and on. Compared to "The Path of Power", the story is actually not quite as good. However, overall, I rate this movie slightly higher because the other one gets dragged down by the inappropriate fan service, whilst this movie is more friendly to the targeted audience due to lack of fan service, so just about manage to keep its head above the 6/10 threshold (which is equivalent to like a 9 or 10 relative to other Dragon Ball movies).

Start a new discussion for Dragon Ball Movie 1: Shen Long no Densetsu anime. Please be fair to others, for the full rules do refer to the Discussion Rules page.