Five years after winning the World Martial Arts tournament, Gokuu is now living a peaceful life with his wife and son. This changes, however, with the arrival of a mysterious enemy named Raditz who presents himself as Gokuu's long-lost brother. He reveals that Gokuu is a warrior from the once powerful but now virtually extinct Saiyan race, whose homeworld was completely annihilated. When he was sent to Earth as a baby, Gokuu's sole purpose was to conquer and destroy the planet; but after suffering amnesia from a head injury, his violent and savage nature changed, and instead was raised as a kind and well-mannered boy, now fighting to protect others. With his failed attempt at forcibly recruiting Gokuu as an ally, Raditz warns Gokuu's friends of a new threat that's rapidly approaching Earth—one that could plunge Earth into an intergalactic conflict and cause the heavens themselves to shake. A war will be fought over the seven mystical dragon balls, and only the strongest will survive in Dragon Ball Z. [Written by MAL Rewrite] 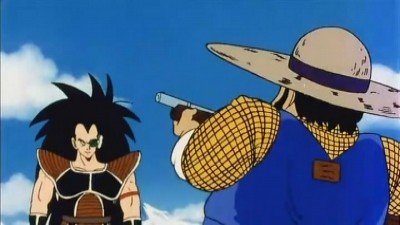 Mini-Goku is an Overprotected Boy! I Am Gohan

With no new battles to fight, Goku has been living a quiet life in the countryside with his wife Chi-Chi...and their son Gohan! While Goku makes plans to spend a happy day with friends on Master Roshi's island, a powerful new threat is on its way to Earth. And the arrival of this sinister alien could spell disaster for Goku and his friends! 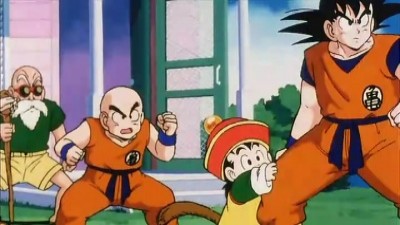 The Mightiest Warrior in All of History is Goku's Older Brother!

Goku and Gohan attend a reunion on Master Roshi's island, where Goku introduces his son to all of his old friends. The smiles quickly fade, however, as an unexpected visitor lands on the island, and for Goku the day becomes a reunion of a different kind. A powerful alien has arrived. It's Raditz: Goku's evil older brother! 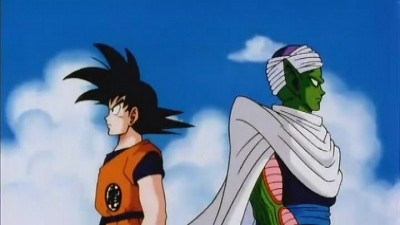 All Right! This is the Strongest Combo in the World!

Raditz has kidnapped Gohan! And unless Goku agrees to forsake his friends and the people of Earth by joining the sinister Saiyan, he may never see his son again! All hope is not lost, however, as a second uninvited guest arrives on the island - and Goku forges an unlikely alliance! 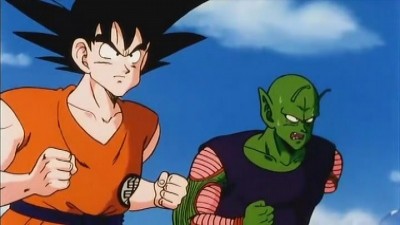 The situation looks bleak for Goku and Piccolo, as Raditz easily deflects every attack they send his way. But Piccolo may have a way to stop the sinister Saiyan. He's perfected a powerful new attack, the Special Beam Cannon!There's only one problem: Piccolo needs time to gather the energy for the blast, which means Goku will have to last for five minutes against Raditz alone! 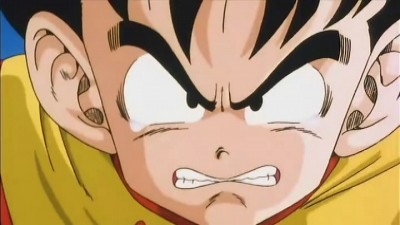 As Goku takes blow after punishing blow from the evil Raditz, Gohan is able to watch no longer! The young boy's rage unlocks an awesome power sleeping within him, and he unleashes a mighty attack that not even Radtiz can resist! But as quickly as Gohan's power appears, it vanishes. And when Raditz prepares to strike back, Goku must make the ultimate sacrifice to save his son! This all only leads to the revelation that two more Saiyans are on their way to Earth. 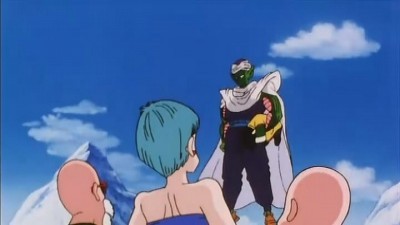 Even Yama-sama is Surprised, The Fight Continues in the Next World

With Raditz defeated and Goku gone from this world, the surviving Z Warriors must begin preparing for the arrival of two more Saiyans who will reach Earth in one year's time. Piccolo takes Gohan into the wild for a severe training program, in the hope that his hidden power will be revealed. Meanwhile, Goku embarks on a new adventure in the next world, as he must travel the endless miles of Snake Way to receive training from the legendary King Kai! 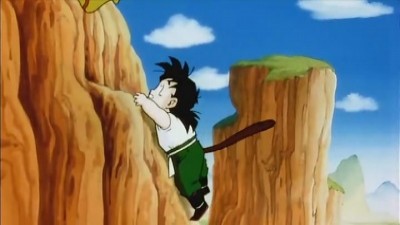 Gohan begins his first day of Piccolo's training. Alone in the wilderness, he must quickly learn to take care of himself. But that isn't easy when he's tired, hungry - and being chased by hungry dinosaurs! If Gohan's first day is this dangerous, how will he ever survive for the second? Piccolo secretly watches these events. 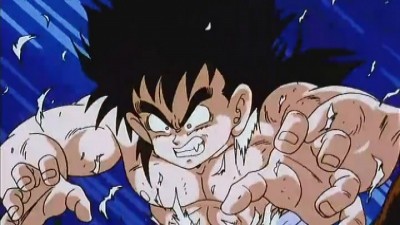 A Great Transformation on a Moonlit Night! The Secret of Gohan's Power

Krillin receives a startling message, sent by Yajirobe. Korin wants him to gather Yamcha, Tien, and Chiaotzu and report for special training! And if that weren't enough, he and Roshi still have to find a way to tell Chi-Chi what's happened to Goku and her son. Meanwhile, Gohan's training causes him to undergo a shocking transformation! 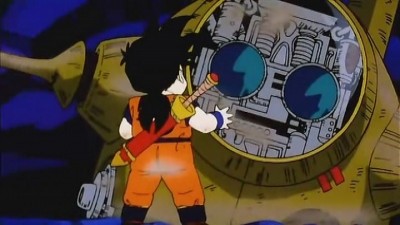 Gohan awakes in the wilderness to find his tail gone and a new set of clothes on his back. But the puzzled boy has little time to figure out what happened before a group of wild animals try to have him for breakfast! The chase leads Gohan into the depths of an ancient cave, where he meets an old Capsule Corp robot. The robot has lived alone in the cave for over 30 years, and he's not happy to have visitors! 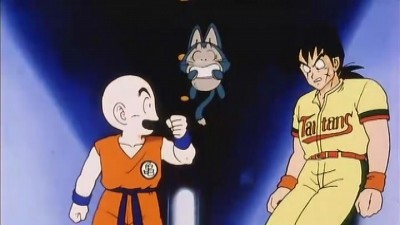 Krillin pulls Yamcha away from a rowdy baseball game to begin training at Korin Tower. Meanwhile, Gohan's adventures in the wilderness continue, as he makes a new dinosaur friend! Gohan is happy to finally have some company. That is, until he gets a harsh reminder - not all dinosaurs are friendly!

Honestly, I never used to like Dragon Ball. The constant screaming, the seemingly pointless attacks and then the artwork. I will no expound on how much I hated the artwork. But then a good friend of mine sat me down (trapped me in front of my computer screen) and made me look at it and I found it was very enjoyable.  However, I still find it very annoying.  True I enjoy the fights, the characters (let me not go to one very sexy Saiyan prince whose name sounds a lot like vegetables) and the development but I could do without the fights taking 10 episodes each. Or a particular move taking an entire episode to power up. Not to mention the absurdity in that, while fighting, no bad guy in their right mind will simply stand up and watch as their opponent powers up an attack that would surely mean their demise. Come on! Simply put, while I do enjoy looking at the Dragon Ball series, it lacks any kind of finesse.  If you're a shonen fan and enjoy watching characters beat each other bloody, go right ahead and enjoy, but if you're looking for character depth and development (aside from muscles and power levels), a thrilling plot line and being able to sit through an episode with less than 5 minutes of incoherent screaming then turn right around and move your tush on to another anime, 'cuz you aint gonna find it here.

DragonBall Z started it all for me. This was the series that got me into anime.Like many other people, I was a child (10 years old) when I first tuned into DBZ, and I have been addicted ever since. Seriously, it just doesn't get old, like a classic soap opera.DBZ continues where the ever cute Dragonball finishes off...Our main character, Goku, is now an adult who is now married with a child, living a peaceful life in the mountains. That is until trouble strikes.Goku and friends are then thrust back into the adventureous lifestyle they lived in the past, only this time, their journeys take them; outerspace and to the afterlife, fighting a range of villians from all walks of creation. Dragonball Z features many great saga's, in which dispite they serious storylines, still manage to be fun enough to keep you in a good mood and keep you addicted to the very end.Also, you can't help but love the characters of the very dysfunctional Z gang.You may end up like me, going through the episodes again and again for years? Yet I'm crazy.

Great anime that's why my enjoyment is a ten, I still enjoy watching DBZ. but, now I'm watch shows like Black lagoon and Dragon Ball Z pales in comparison, pretty much its the truth DBZ characters are very shallow and we never seen a sense of character development or struggle( fighting don't count) Vegeta and Piccolo,Gohan are probably the three most developed characters in Z but they are still shallow like the rest. Andriod arc was the last original arc both Cell and Buu are the same one-dimensional villian who want to kill everybody for no good reason except, they need to absorb life forms to evolve into their perfect forms(Buu actually goes through development thats the only difference between them.) I don't have much to say except Dragon Ball Z is a great battle anime that set the standard for most anime with action scenes.

This was my childhood and it was an amazing ride. Dragon Ball Z is a must watch in my opinion. It had a great story line and also, there are many characters that grow who you will come to love. There a lot of fillers but overall, the anime was really good. This is a my bias opinion due to the fact that I am only recollecting on my childhood memories.

Ok, DBZ is the anime that brought me and probably most of the anime fans into anime. And that's why it's my favorite anime,, I personally think that it's the best anime that's ever made so far. I'm sure you all know the story of DBZ, that's why I don't need to explain a lot. It's not the best story out there, but in the eyes of a fan it has its moments and the overall plot it actually pretty good. What i really really love about this show is that i've watched this anime at least 100 times, and i still like it.There are plenty of better anime, with better story, better soundtrack and music and better much better animation. For example: Fullmetal Alchemist: Brotherhood,, I Love this show,, still I couldn't watch it more than twice. DBZ is the anime that has the bigest rewatch enjoyment. P.S. Look what i found on the internet: <u>Big guys with big hair that glow and fight really, really fast</u>

If you don't like DBZ, you're doing anime wrong tbh.

Vegeta what does the scouter say about the nostalgia levels. It's over 9000!!!! A truly amazing shounen anime for boys of all ages. if you have yet to watch DBZ then you need to drop everything and go watch it now.

Because this is a cult anime I thought it was good but at the end it was just shitty brainless that fail to make over the top scene with one of the worst design ever. Seriously Dragon Ball Z is just bad, really bad... If you plan to watch it, don't even try and watch anime like "kill la kill" if you want over-the-top action.

Start a new discussion for Dragon Ball Z anime. Please be fair to others, for the full rules do refer to the Discussion Rules page.