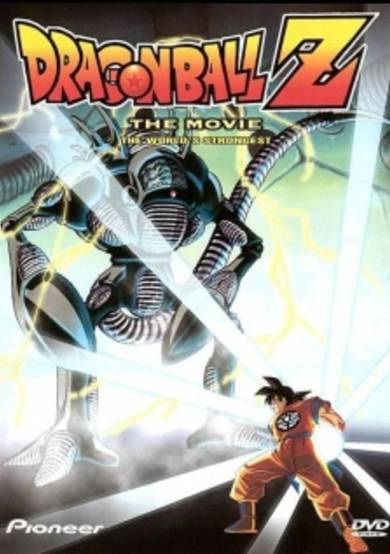 The evil Dr. Wheelo has resurrected his brain into a robot and now desires to inhabit the body of the world's strongest warrior. This means he must face Son Goku and company in a fight for Goku's life. (Source: ANN)
User Count7219
Favorites Count9
Start Date10th Mar 1990
Next ReleaseInvalid date
Popularity Rank1562
Rating Rank7946
Age RatingPG
Age Rating GuideTeens 13 or older
Subtypemovie
Statusfinished

Hmmm, "The World's Strongest" was actually better than the last Dragon Ball Z movie I watched (the one with the cyborgs). So I guessed (correctly) this must have been made before the other one, when they were less short of ideas. This movie is slightly more exciting than the other one, but other than that, it's the same stuff. Same crappy jokes, same unimpressive animation, and same retarded storyline. Again, the story spends a few minutes introducing who the bad guys are... then promptly descends into endless fighting. The only differences between this and the last Dragon Ball movie I watched is that this movie spends maybe five minutes longer before the main battles start, and also Goku is fighting different opponents this time round. The fighting itself isn't much to talk about either, as it gets seriously repetitive after a few minutes. A bit of a worthless movie whichever angle you look at it from.

Story: Dr. Wheelo is looking for the strongest fighter in the world to be his next body. He is currently a brain in a robot. Basically the story is set up so Goku can kick butt like all DBZ movies are. Animation: Great for its time Sound: The opening will get stuck in your head. Character: Goku and the Z fighter are the same as always. Goku, Gohan, Krillin, Piccolo and Master Roshi get the attention, far as the heroes. Dr. Wheelo is a okay main villain. Standard want to conquer the world type of guy with a lame sidekick. Enjoyment: The fights with the small minions were good and funny. Dr. Wheelo has his good moments and his bad. Krillin and Master Roshi supply the laughs, pretty well. Overall: If you love Dragonball z you should watch this. If you don't or don't know what dbz is you should pass. 6/10

Start a new discussion for Dragon Ball Z Movie 02: Kono Yo de Ichiban Tsuyoi Yatsu anime. Please be fair to others, for the full rules do refer to the Discussion Rules page.