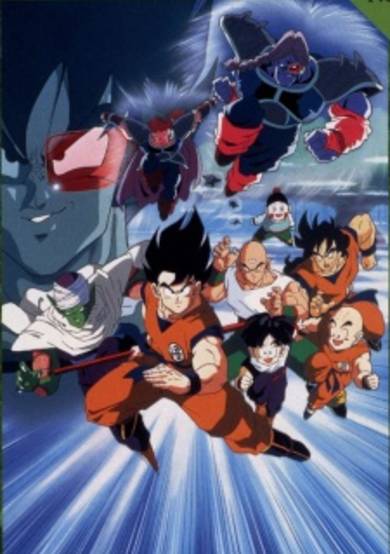 The Saiyajin named Turlus has come to Earth in order to plant a tree that will both destroy the planet and give him infinite strength. Son Goku and the Z Warriors cannot let this happen and duke it out with the invaders for the sake of the planet. (Source: ANN)
User Count7940
Favorites Count11
Start Date7th Jul 1990
Next ReleaseInvalid date
Popularity Rank1438
Rating Rank7190
Age RatingPG
Age Rating GuideTeens 13 or older
Subtypemovie
Statusfinished

Another Dragon Ball Z movie, another improvement on the ones I've watched before. This makes 4 in a row!!! This one is especially surprisingly - it turned out to be quite a good action anime overall, and not just compared to the other movies of the franchise. As far as fighting anime go, it's certainly not quite as the same level as the Street Fighter 2 animated movie, but still it's pretty good. The action is quite absorbing for once, consisting of more than just ultra fast punching sequences, and the story is actually slightly more sophisticated than the usual "here's a new boss, now go get him, Goku" format that I've come to expect from the Dragon Ball Z movies. Unfortunately, given the incompetence of the story board of the franchise, it also means there are more plot holes - you would think it's impossible to have plot holes in a plot that's as thin as this, but they somehow managed it. The ease with which the Eternal Dragon is summoned seems like a bit of a cheat - if they can summon him that easily and get it to grant any wish, surely they can just used it to solve any problem? It's funny how they used it to solve one small problem in their path rather than the root of their problems. Also, the ending... it's kinda hard to be any more specific since it would count as a spoiler, so lets just say the way it ends is pretty ridiculous.

Story: One the few DBZ movies with a good story, ok decent story. Still doesn't fit in the shows storyline though. Turlus, a sayan plants a tree that will bear fruit and increase his strength 100 fold. The problem is that he plants it on Earth and it sucks all the life out of Earth, in order to bear the fruit. Better than the normal Goku here is a new villain go kill him story. Not that I mind those Animation: Decent for a DBZ movie. Sound: Catchy as always. Character: The Z fighters are the same as always. The minor villains are actually cool, aside from the midgets and the cyborg. The main villain is Turles, who makes for a good lead villain. Enjoyment: Every Z fighter as their own fight and villain, wish is rare for a DBZ movie and the fights are quite quick and satisfiying aside from the midgets and cyborg. Gohan turns into giant ape which is always fun. The main fight between Goku and Turles is good, besides the generic way they beat him. Overall: One of the better DBZ movies. It has an actual plot, which is always nice. Though they waste the dragonball wish on something so corny. If you want to see all the Z fighters engage in combat watch this. If you don't than your loss. 7/10

Start a new discussion for Dragon Ball Z Movie 03: Chikyuu Marugoto Choukessen anime. Please be fair to others, for the full rules do refer to the Discussion Rules page.