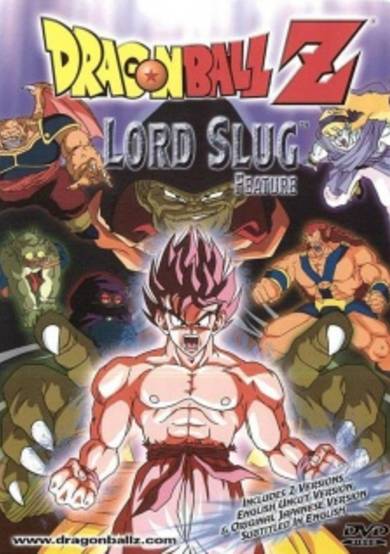 After watching 4 Dragon Ball Z movies each better than the last, to my relief, they've finally stopped improving. I was getting worried at one point that I would have to start rating them like 8 or 9 eventually. :PThis is the first Dragon Ball Z movie that I watched in Japanese... and it turns out this is one of the few anime where the sub does not seem like much of an improvement upon the dub, if at all (assuming the dub in this one is of similar quality to those in other Dragon Ball Z movies). I mean, did they find a bunch of kids to voice this thing?! Because that's what it sounds like, especially Goku's voice.I think they actually attempted to produce something that's slightly more clever than most Dragon Ball Z movies. Unfortunately, the result isn't pretty. A couple of things happened during the battles that didn't entirely make sense. In addition I'm starting to get a bit tired of the ease at which the Eternal Dragon is summoned, the characters can do it so easily that I'm half expecting them to start collect the dragon balls and summon the Eternal Dragon just to fix a hole in their sock next time round. In case you don't know, once you collect all the dragon balls, you can summon the Eteneral Dragon which grants you a wish, after which the dragon balls all disappears ready to be collected again. Not only does it seem like something that belong more in a game than in a proper storyline, it's also a really bad plot devise that's basically like the cheesey short cut to everything - instead of going through the painstaking process of developing the story, you can just use the Eternal Dragon to get it to where you want it to be and voila, dilemma solved!But Despite all the flaws, it's still one of the better Dragon Ball Z movies I've seen.

Story: Normal dragon ball z story. There is a Super Namekain, who appears to get the dragonballs. Goku and fellow z fighters appear to stop him. Normally I would be satisfied with this, since I love dragon ball z. Its just that the main villain is so stupid I didn't care. Animation: What you would expect from Dragonballz. Sound: Catchy as always. Character: Goku and z fighters are same as always. Master Roshi And Krillin, supply the funny moments as normal. The Main villain and minions are so poor that you won't care about them at all. Enjoyment: Terrible. When it comes to Dragonballz, if you don't care about the villain, you won't care about the fights. And the fights are what this show was all about. Overall: Worst Dragonballz movie ever made. There is no reason for this movie to exist. Lord Slug was just so bad. Do not bother with this at all. 3/10

Start a new discussion for Dragon Ball Z Movie 04: Super Saiyajin da Son Gokuu anime. Please be fair to others, for the full rules do refer to the Discussion Rules page.