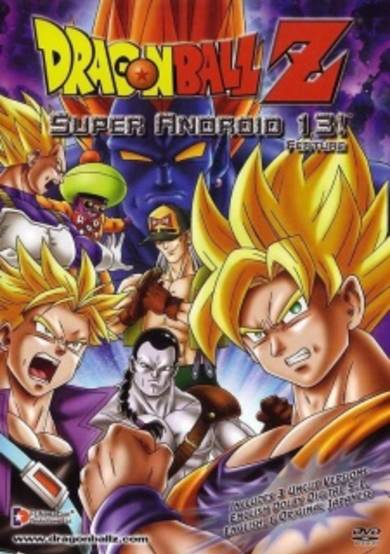 Dr. Gero's Androids #13, #14, and #15 are awakened by the laboratory computers and immediately head to the mall where Goku is shopping. After Goku, Trunks, and Vegeta defeat #14 and #15, #13 absorbs their inner computers and becomes a super being greater than the original three separately were. Now it is up to Goku to stop him. (Source: ANN)
User Count7438
Favorites Count15
Start Date11th Jul 1992
Next ReleaseInvalid date
Popularity Rank1524
Rating Rank6604
Age RatingPG
Age Rating GuideTeens 13 or older
Subtypemovie
Statusfinished

You know, before I watched any Dragon Ball Z, I often imagined how bad the franchise could be, given its less than favourable reputation. I decided to download some of the Dragon Ball Z movies partly out of curiosity and partly to watch something that wouldn't require much concentration when I'm eating dinner. This is the first one that I watched. Having seen it, I have to say it did not disappoint. In other words, it's as bad as what I was expecting and did indeed provide something to watch that require near zero concentration."Super Android 13" has lame jokes, bad voice acting, and worse of all, a storyline that could have been written by simpletons: Robots programmed to kill Goku. That's it. Seriously! It's a pretty poor effort even for an action film. There's practically no character development (or even characterisation) to speak of, and barely any dialogue, just continuous battling. But since it's an action anime, it would have been redeemable if the action is even half decent. Alas, it isn't. It's ridiculously unimaginative, and follows the usual hero keeps powering up till he wins patterns with impressive faithfulness. If there's anything that I hadn't seen before, it's the ultra-fast-exchange-of-blows style battles... but the movie used it so much (like 90% of the time) that by the time it finished I was already bored of it.\*sigh\* I can see why this "movie" is only 45 minutes long. It would be hard to make anything longer than this with the kind of material that this anime has to work with.

Android 13 Story: 3 androids, android 13 and two others, appear for the sole reason of killing Goku. Typical DBZ movie story bad guy appears to kill Goku. The funny side story of the beauty pagent was quite funny. Though why Trunks was there I have no idea. Animation: same as always. Sound: Catchy as always. Character: The Z fighters are the same as always. Goku, Vegeta and Trunks are there to kick butt. Krillin and Master Roshi are there to supply the laughs, quite well. The other two androids besides 13 were quite dull. Android 13 had a bad country hick accent but for some reason I enjoyed him though. Enjoyment: The fight with the lesser androids was quite dull, why did the sayans not go super sayan at the beginning I will never know. Master Roshi and Krillin were funny in my opinion. The main fight was pretty decent. The conclusion of the fight was a move I quite liked and wonder why they didn't do that in the show. Almost forgot laughed real hard at a reaction between vegeta and Piccolo, at end of movie. Overall: This is nothing more than straight action DBZ movie. Once again if you like DBZ watch this, if you don't stay away. 6/10

Start a new discussion for Dragon Ball Z Movie 07: Kyokugen Battle!! Sandai Super Saiyajin anime. Please be fair to others, for the full rules do refer to the Discussion Rules page.