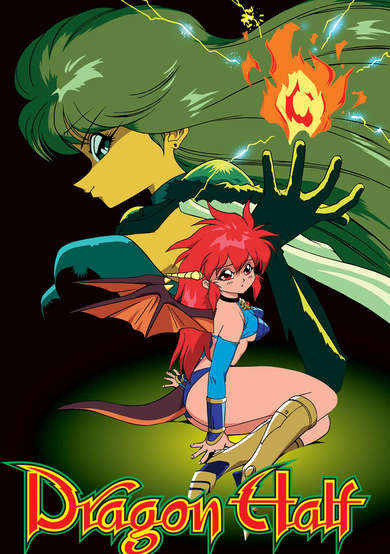 Mink—the daughter of a dragon and a retired dragonslaying knight—sets out on a journey to get tickets for a concert held by Dick Saucer, world-famous teen idol and dragon hunter. Meanwhile, the corrupt king of the land is trying to take her hostage to get at her mother, and his magic-using daughter seeks to foil Mink's quest out of sheer spite. (Source: ANN)
User Count1756
Favorites Count9
Start Date26th Mar 1993
Next ReleaseInvalid date
Popularity Rank3742
Rating Rank6017
Age RatingR
Age Rating Guide17+ (violence & profanity)
SubtypeOVA
Statusfinished

All Dragon Half released episodes

Take the dumbest anime you can possibly imagine, multiply that by 2, and what you get is something that's probably only half as stupid as "Dragon Half".This is an anime of the dreaded "comedy" genre. I'm not a fan of the comedy found in anime in general, and "Dragon Half" represents the worst of this kind of comedy, containing just about every anime comedy cliche under the sun. Over the top? Check. Nonsensical? Yep. Super deformity? Hell yes. The whole thing is a big joke, and not a very funny one at that. Basically, there are a couple of hilarious moments, and the rest just bored me to the point of tears. Making witless noises such as "Piri piri fumi fumi" (I'm sure you'll forgive me if I don't get these incredibly profound lyrics exactly right) over a mix of Beethoven songs in an attempt to pass it off as a funny ending theme isn't clever. It's retarded. And that's exactly what this show is.I watched this in dub, and unusually enough, the dub actually fits the anime quite well. Having said that, even if it did suck, I can't imagine watching it in sub will be much of an improvement. Shows like these can't be saved by having good voices - they're far, far beyond redemption.On top of the random nonsense contained in the anime, it has no ending, just a beginning, because it was planned for more than two episodes - I'm knocking off major points for that. Although I guess I should be thankful that this didn't go on for any longer. If it did, my sanity would probably be beyond redemption as well.Unless you're a fan of the most silly type of anime comedy imaginable, avoid "Dragon Half" like you would avoid a dragon that's bent on eating your brains for lunch, because that's the effect this anime will have on you.

Start a new discussion for Dragon Half anime. Please be fair to others, for the full rules do refer to the Discussion Rules page.