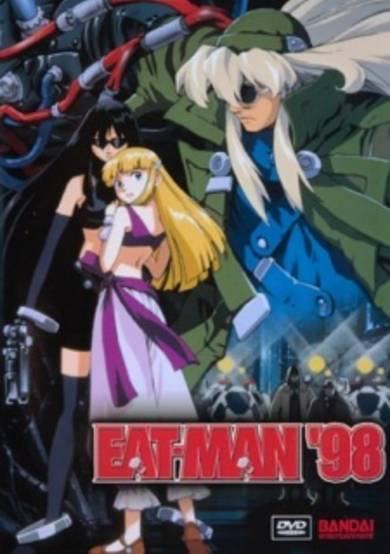 The continuing adventures of Bolt Crank, the World's Greatest Mercenary, who has the ability to eat any object, mostly metal and weapons. When the time comes, Bolt can then reproduce those weapons and items in his right hand. (Source: ANN)
User Count431
Favorites Count1
Start Date8th Oct 1998
Next ReleaseInvalid date
Popularity Rank6762
Rating Rank6053
Age RatingPG
Age Rating GuideTeens 13 or older
SubtypeTV
Statusfinished

The businessman Mark Mitchell meets the explorer Kyurene at an inn on the outskirts of Darjan. Mitchell promises the explorer five million in return for the assassination of a mob boss. A mysterious man cleaning up the bar attracts their attention.

A Person Falling to Ruins

To shed light on an island used for biological experiments in the past, the armed forces ask for the help of an expert biologist and Crank Bolt, the world's best explorer. They land on the island and set out in search of what caused an entire battalion to go missing.

Bolt Crank is commissioned by the Dusolier Corporation to steal a painting preserved in the Hotel Promise, where he is captivated by the charms of the proprietor Anina. The young heiress is shaken and confesses to Bolt her fear of losing her inheritance due to a special condition in her grandparents' Will.

The Graveyard of Temptation

What can I say about this series?It's as odd as it gets. Eat-Man 98 ( sequel to Eat-Man) is an old, vintage anime with a futuristic, military look, sci-fi theme and western type music.We meet a drifter mercenary named Bolt Crank, what he is exactly is not addressed in this series, yet he has the bizzare ability to eat the likes of metal object then reprodece them through his arm?Through the series, you'll notice Bolt chowing down on screws and shards of metal in order to creat a machein gun or cannon.Eat-Man 98 also features; a mysterious healing girl, government agents, medevil villagers and an immortial fighting lesbian with a sweet girlfrien who turns into a monster?What makes this series just that bit more bizzare is the fact that the mood is fairly serious, despite having all the makings of a great comedy.Worth a watch. ;D

Start a new discussion for Eat-Man '98 anime. Please be fair to others, for the full rules do refer to the Discussion Rules page.