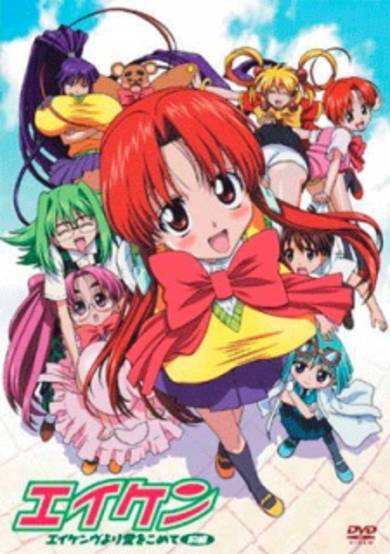 To some people, Densuke Mifune looks like the luckiest man in the world. Thanks to a chance encounter with the brilliant, beautiful, busty, but extremely shy Chiharu Shinonome, Eiken: Eikenbu yori Ai wo Komete sees Densuke being forcibly invited to join the mysterious Eiken Club. Led by Kirika Misono, she recruited Densuke both for his completely boring, unassuming nature and his completely accidental groping of Chiharu’s chest. Despite the fact that he’s now surrounded by insanely busty women, Densuke can’t catch a break to save his life. All of his attempts to get closer to Chiharu end up backfiring, making him look like a deviant pervert. His situation is made more complicated by the rest of the Eiken Club’s overly sexual antics and Chiharu’s younger sister intentionally trying to get Densuke into some…compromising positions. It doesn’t help matters that Chiharu has expressed fondness for Densuke in return, but all of the accidental circumstances keep pushing her away. Densuke needs to act fast if he wants to find his way back into Chiharu’s good graces. A beauty like her doesn’t go unnoticed, and he may very well find that he’s not the only one trying to win Chiharu’s heart.

From the Eiken Club with Love - Part 1

The story begins with a man named Densukego Mifune, starting high school student enrolled in the school Moloch Zashono. More specifically - beginning familiarity with the school from close contact with breasts Shinonome Chiharu, supposedly the most intelligent and the most beautiful high school student of the first class... Well, she actually is smarter than the protagonist. Or at least it does not need two minutes to realize that he accidentally began to grope her breasts. Moments later, there is some gold down with another beauty in a duet on board... and the hero is forced to join the club Eiken.

From the Eiken Club with Love - Part 2

Eiken soon takes part in big competitions organized by Zashono .There is also an opponent of the heart Shinonome.

A comedy, harem, ecchi series of two OVAs based on the manga of the same name, Eiken is, to put it bluntly, over-the-top, offensive, garbage. Now, I do enjoy a good ecchi anime every now and again, and there are actually quite a few top-notch and highly enjoyable anime that can get quite raunchy. Unfortunately, Eiken fails in all aspects and ends up as bottom-of-the-barrel fish paste not worthy of being called fish paste. Eiken's plot would make more sense had one come in reading the manga, however, I will be approaching this story from the point of view of someone that has not read the manga. The protagonist is Densuke Mifune, an average, earnest student at the school for the incredibly well-endowed and member of the Eiken club; a club that seems to have various goals, but mostly exist to give Densuke an excuse to hang out with busty and beautiful bodacious babes and get in erotic and, supposedly humorous, situations. These girls are fine and all, but Densuke really has his eye on, who else, but the most attractive girl at school, the red-headed Chiharu Shinonome. Throughout the course of the the two-episode OVA series, Densuke enters a local competition involving risque events in order to earn enough money to purchase a gift for his crush, gets in misunderstandings, attempts to ward of his sister, gets in misunderstandings, encounters a potential rival to Chiharu's affections, and gets in misunderstandings. So, in all in all, a typical plot for a couple of episodes of any harem. This is not bad, but what *is* bad, is the execution. Eiken has fan-service in butt-loads, and breast-loads for that matter. The entire series is wrong in numerous ways, and while ecchi anime now-a-days have gone farther, Eiken is still up there and as pretty messed up and perverse. The fan-service really pushes it, I even found some of it offensive as a woman, and I'm a man. However, the thing, or should I say things, that I found to be the greatest flaw in this series, is the breasts. Now, I like huge 'talent', but some of the girls in Eiken are not girls, they are paired-up beached whales with tails in the shape of a girl's body. Eiken, if anything, is a huge spit in the face at the laws of physics and body shape. Beyond the insane character designs, the animation was not *that* bad. Not good, but not bad either. The same can be said of the soundtrack. It's not bad, but it's forgettable. At least it was not an assault on my ears as much as the show was an assault on my eyes. Beyond animation and sound, Eiken is terrible. It attempts to be comedic, but it's jokes fall flat and are meant to do nothing more but provide more fan-service. At times, Eiken even seems to be a parody of the harem genre, purposely making fun of the tropes often associated with harems. However, the way Eiken approaches it, is similar to putting crap on a stick and saying, "Hey! Look! This is the harem genre! Hur hur hur!" This is good for a few laughs, but in the end, it's still only crap on a stick; it's going to stink and you're going to be left awkwardly holding a dirty stick. To summarize, Eiken is a disaster of an anime. However, I actually recommend watching it, if only to see how horrible an anime could truly be, and in effect give you a better appreciation for all anime series that are not Eiken.

Worst anime I've ever seen. Throughout the entirety of the show, I never even cracked a smile once. It's all fanservice, but it doesn't even get that right. Its character designs are revolting. As for the rest of it, it's characters are all awful, there is no story, at all, sound is largely boring, and the dub is just plain bad (and I am one of those who prefer dubs to subs). Overall, there was no enjoyment whatsoever. Just avoid, horrible waste of an hour.

It's pretty weird for me to write a review for something, but I feel like peeps be giving Eiken a little more flak than it actually deserves. I watched it in a sitting, purely to see exactly how bad it really was, and I have to say, I was not disappointed. Eiken is hilariously exaggerated and really really stupid, but as a teenage girl who's not really into ecchi for "that" kind of reason yet, I thought it was pretty funny how blunt the show was about its fanservice. I almost prefered it to other shows that are full of it because it doesn't pretend to be about anything other than cramming as many lewd and fetish-y things into an hour of screentime, and you know what? I can respect that. Outside of my opinion, there is very little outside of a mini arc and romance story-wise, so I'd give it a 2 for at least having one that has a conclusion and everything. Again, this is a 2-episode almost-hentai. (The entire show is basically one big boob joke.) so you can expect some nicely animated "areas", however the budget obviously went towards this, so the rest of the show's environment is pretty lacking. I'd give it a 4. Sound? I really only noticed two or three tracks in the background, but they weren't awful, and the op and ed were standard fare. Voice acting in the dub was horrendous, and I can't speak for the sub, and any effects given were passable. Characters are a 3, because although they are all quite 2-dimensional and fairly uninteresting, for a two episode series, there is a pretty sizeable cast and they all at least are given a stereotype. Except for Kuma, I don't even know what he is. Enjoyment is a 5. It was amusing in it's own creepy little way, but I wouldn't watch 10 more episodes of it.

A true work of postmodern art. With amazing animation and heavy meaningful symbolism, this work of narrative perfection never fails to impress.

Breast anime ever! Seriously, i've never seen anything so interesting. This tops fullmetal alchemist and boku no pico anyday. Even tom said it was great.

(Adapted from my MAL review) ....How the heck is it physically possible for boobs to be this big? It's pretty much the main thing wrong with Eiken. However, there is more than humongous watermelons that could make an anime THIS bad. Okay, so this anime, Eiken, is about a boy named Densuke Mifune. He joins a club, known as the Eiken Club, and most of the girls in the club - no, most of the girls in this entire anime - have impossibly large breasts. I mean, seriously. I know that there are two B Gata H Kei characters with F-cup breasts, but this is ridiculous! Does Eiken have a lot of plot other than huge breasts? No. Just too much ecchi than what can be handled, and I can handle most ecchi anime! It's nothing but boobs, boobs, and more boobs. Did I mention boobs? Ahem. Well, let's talk about things other than Eiken's "plot". The art and animation isn't TOO bad; it's animated by a decent studio, J.C.Staff, after all. They just have too much boobs in the art. The OP and ED themes are respectfully known as "Feel Like Our Days" and "Jewel's Memory", both performed by a singer known as Toko, and they're both decent, as well. The voice acting for the characters are below average (and I'm saying this after watching both episodes in English), but they're not as bad as the characters themselves. The characters. THE CHARACTERS. There is even one that is supposedly in 6th grade, but she has the BIGGEST boobs I've ever seen! (I should really stop saying that word.) All of the female characters just want to get it on with the main character, Densuke, who is actually bad himself. Who does he remind me of who is also a bad anime character? I dunno. I hoped that I would come to like Densuke's love interest, Chiharu Shinonome, but she turned out to be such an uninspired character! So yeah, I did NOT like Eiken. I suggest you only check it out if you're a big pervert who just LOVES girls with big racks. The rest of you? Stay as far away as possible; these mere 2 episodes aren't worth your time.

I had felt sick after watching this so i went to the doctor and i discovered i had a brain tumor. That\`s what Eiken is a brain tumor.

Start a new discussion for Eiken: Eikenbu yori Ai wo Komete anime. Please be fair to others, for the full rules do refer to the Discussion Rules page.