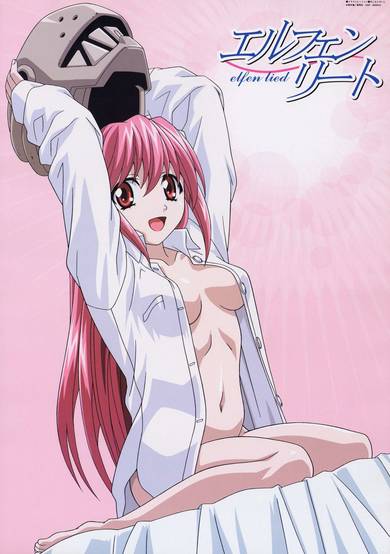 Having been accepted into the Kaede Inn, Nana struggles to find some way to contribute, though she inadvertently brings more trouble than assistance. However, Nana's worries are directed more towards fellow resident Nyu, whom she had only known as Lucy, the violent Diclonius. Fearful that Nyu will unleash the same horrific savagery—violence that scars Nana to this day—upon those close to her, Nana faces a dilemma: attempt to live peacefully alongside Lucy with all the uncertainty that that entails or dispose of the source of her worries, shattering the relationships she has formed at the inn. As Nana struggles to come to a decision, Nyu recalls a painful memory of one of her dearest friends and one of her greatest rivals. [Written by MAL Rewrite]
User Count12617
Favorites Count17
Start Date21st Apr 2005
Next ReleaseInvalid date
Popularity Rank942
Rating Rank5246
Age RatingR
Age Rating GuideMild Nudity
Subtypespecial
Statusfinished

The "Elfen Lied" DVD special feels like an attempt to do a "quick fix" on the story that they botched up in the original series. This attempt resulted in somewhat mixed results. On one hand it does succeed in shedding some much needed light on certain events, such as the capturing of Lucy, however on the other vector, the explanations feel like they've been shoehorned in, resulting in inconsistencies in areas such as character development, and raising almost more questions than it answers. This is inline with what I would expect from "Elfen Lied" though, given its track record of throwing in large scale twists and backstories without carefully considering their impact on a wider scale. This isn't going to change your opinion on the series either way though. People who liked what they saw in the series will want to check this out because of the extra background it provides, and people who did not aren't likely to have their minds changed by this offering, given it has pretty much all the flaws of the original.

Actually, This special chapter is not as good as the story itself,but,from one point of view, it helps to clairfy some points of the anime that are not explained, such as the time when lucy is captured. However, is not necesary to watch this chapter to understand the story,and,in my opinion, is not an enjoyable chapter. It is like putting manga´s content on one episode because we cannot put it onto the anime.Also, this chapter don´t explain much more than that.In fact, it only explains lucy´s capture and how lucy and nana became friends.I don´t liked the chapter and I don´t recommend it.

\[Old review is old.\] There are many times when I feel like I should utterly despise Elfen Lied, due to the poor handling of subject matter, the desperate means for any form of attention, and the production values that have unfortunately become famous to the identity of anime. But every time I watch it, I still get pulled into the tornado of absurdity when all of these bad points end up forming a surprisingly fun and entertaining identity. But if I could pinpoint my hatred for all the bad values that Lied presented on some other form, it would probably be this OVA. Taking place in the middle of the 11th episode, this special adds in a couple plot elements that weren’t shown in the anime. While Nana is trying to fit into the cousin’s household alongside the homeless kid, Nyu is suddenly on the verge of turning into Lucy again, leading to a flashback that shows more of young Lucy’s battles with maintaining friendships and her encounters with the police who want to capture her. The special is divided into two parts: Nyu exploring how to help out around the house, and Lucy in a coma remembering more of her past. Part one is excessive anime cuteness with overly kawaii faces and some bizarre attempts at dark slapstick. Some of the scenes were so cringe-worthy that I debated just walking away altogether from a mere twenty minute special. And now that I know some of these famed expressions firsthand, I’ll probably dislike them even more. Luckily this part doesn’t last the majority of the special, but it’s fairly slow compared to the entire show. I ended up liking some bits of part two, despite how it shot itself in the face by the time it ended. We see yet another fragment of Lucy’s backstory when she meets yet another friend, eventually leading to her capture and restriction in the laboratory, which proved to be interesting as usual. However, it didn’t feel like an important part to the overall story. It ended up creating a bit of an unbalance, almost as if the special was lighting up way too much of the story in a poor attempt to tie things together. It wasn’t essential to perfectly connect plotpoints in the show that weren’t explored fully, and how they do it creates even more aspects that are barely explored, so it just feels pointless once it’s over. It’s just another small bit of tragedy that feels slow and tame when put next to everything the anime pulled. As far as production values go, there’s very little unique sequences or pretty backgrounds this time around to disguise some awfully sterile animation. The voice actors still don’t bring much to the table, but the soundtrack still provides a couple good songs for our listening enjoyment. As expected, once you remove the gore, the botched subject matter, the energetic presentation, and the overall shock factor, nothing is there to hold Elfen Lied up. Granted these methods were poor ways to hold it up in the first place, at least it was fun to get lost in whenever the anime used the most extreme methods to keep from losing viewers. Everything that made Elfen Lied annoying is rounded up in this special and drained of any aspects from the anime that at least made them tolerable. So when everything is added up, this special doesn’t change anything, and actually ends up being an especially boring insert episode in a show that just can’t stop moving forward in a rampage of ridiculousness. The bonus explorations in the story aren’t worth shedding light on, the events that get focus raise even more confusion, and the saturated anime cuteness at the beginning is enough for me to turn it off before we even get to the meat of the OVA. I give this anime (just the OVA) a score of 3.0/10 (1.5 stars), and an <u>Unrecommended</u> rating.

Start a new discussion for Elfen Lied Special anime. Please be fair to others, for the full rules do refer to the Discussion Rules page.