Thousands of years after Earth's atmosphere was destroyed, adventure blooms in the strangest of places. The domed city of Romdo is supposed to be perfect, but Re-l Mayer, a young female inspector from the Civilian Intelligence Office, knows better. In this place where humans and robots coexist, she receives a strange message: something is awakening! (Source: Funimation) 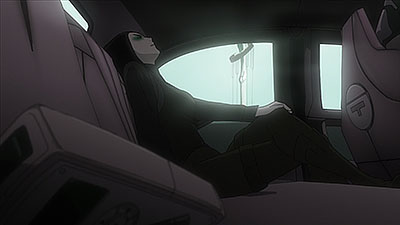 When a series of mysterious attacks involving Cogito infected AutoReivs occur, Re-l is assigned to investigate, and encounters a humanoid monster. Later, she is attacked by two of these monsters at her home. 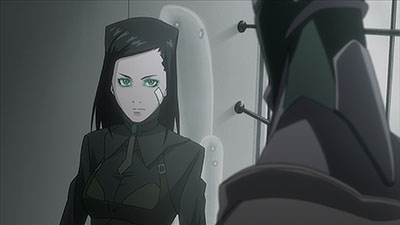 Re-l struggles to convince her peers of her encounters with the monsters, which she learns are called Proxy. She is removed from the investigation and finds that Iggy has had his memories of recent events erased. Meanwhile, Vincent finds himself on the run from a proxy and then the city's authorities. 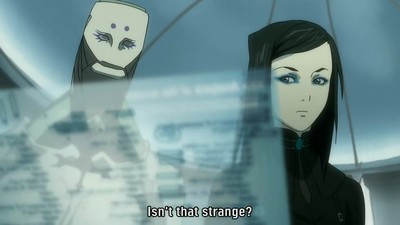 Romdo is no longer a safe haven for Vincent. He is trying to avoid capture by the authorities. As he flees he comes across the infected AutoReiv Pino. Pino then shows him the way to escape from Romdo to the outside world. Re-l struggles to contact Vincent and uncover the true nature of his involvement with the Proxy. 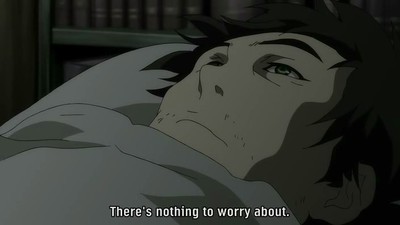 Vincent and Pino are taken in by a small commune, the inhabitants of which make a living off the refuse dumped from the Dome. Meanwhile, Raul plans his move to locate and capture Vincent. 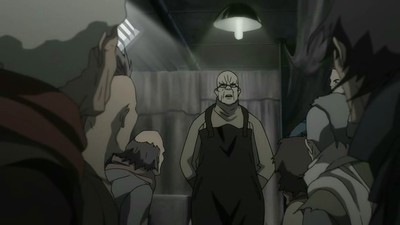 Re-l braves the outside world in order to bring Vincent back to Romdo. While there, Raul commences his plan to capture Vincent by attacking the Commune with patrol drones. Re-l's environmental suit is damaged and Vincent is injured in the attack. Re-l suspicions are confirmed that there is a link between Vincent and the Proxies. 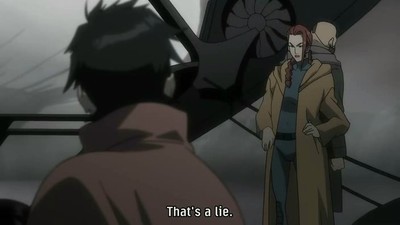 Re-l's life becomes endangered when she falls ill after exposure to the harsh environment. Hoody hatches a cunning plan to trick Raul and return to Romdo. Quinn leads a group on an escape from the Commune using the Rabbit. 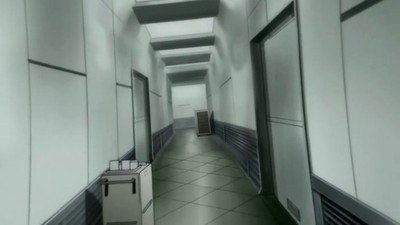 Re-l recovers from her illness. Daedalus shows her the disturbing mechanisms responsible for the Dome's continued survival. Vincent makes his way home, slowly losing his companions along the way, ending up alone with Pino. A group of infected AutoReivs is unleashed on Re-l, Iggy, and Daedalus. The episode ends with Daedalus filling out Re-l's death certificate. 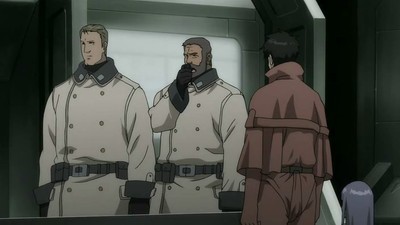 Vincent and Pino stumbles onto war-torn Halos, where they are caught in a war between the dome's human inhabitants and its autonomous AutoReivs. 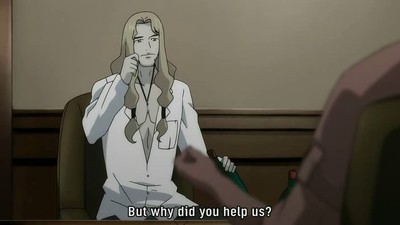 Vincent is introduced to a man named Hauer, and learns some truths about Halos and Proxies, discovering a horrific revelation. 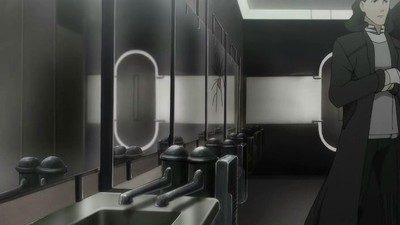 Ergo Proxy is one of those post-apocalyptic anime which you simply can't miss. It's about the restoration of humankind after certain events had gone berserk and the efforts to nullify the tragedy and the big problems that come with it. The series is similar to Texhnolyze but not better. Ergo Proxy manages to develop a very fine story that is both satisfying but can be very confusing and just a little hard to follow at times. But it just adds to its good qualities. The animation is top notch. The overall apocalyptic feel and the motion animation along with the art of the characters is impressive with only a few exceptions. The sound is great. Radiohead's Paranoid Android fits perfectly in the ambiance of the show and the opening 'Kiri' is now one of my favourites. Now for the rough part, its character development is a bit off and seems that a lot of improvisation could have been done (especially of main characters, Re-L and Vincent). The series though frustrating at certain points is very nicely directed and the screenplay is really note-taking (thanks to Dai Sato). Overall, I'd give it a 7.5/10

<strong>This review has minor spoilers. </strong> Ergo Proxy is one of those rare gems we get once every 5 years or so years. It starts of as a grimm anti-utopia that very much reminded me of Brave New World. We are introduced to a city where people spend most of their time shopping and living without much thought, where children are produced. We are meet one of the main characters, Re-l who is investigating the Cogito visus, that somehow makes androids gain souls. While investigating she sees a monster and due to boredom and passion for investigation she decides to get to the bottom of the case. While this seems like a perfect setup for a cyberpunk police mistery alongside the lines of Ghost in the Shell it takes a different turn. It stays a mistery, but not it a conventional way. The investigation leads her to Vincent, a naive young man who for some reason has an affection for her. She gets attacked by that moster I mentioned earlier and her determination and lust for answers grow. Vincent didn't seem related to the case so he is let go. Soon after he is attacked by one of the monsters and in the process wife and child of the chief of police get killed. This leads to the chief framing Vincent and he escapes the dome-city. The setup is here and a the real story starts. It's for a large part an episodic jurney where we pick up pieces of the larger picture and see the exploration of different themes. We will see a lot of episodes revolving around the meaning of life, reason d'etre as they call it here, questions about how would the world look without God, how do we know we are real and we are not a fake, what do we do if we have no exit, where do we find meaning and what do we do when it is lost. I would go deeper into the analasys, but that would require episode by episode and I'm sure you have better time to do than that. The main plot itself is thinck, presented in an excellent way that requires effort to deduce, it's foreshadowed and well paced. I won't say anything more since that would spoil the fun of finding the answers for you. The characters are very well developed. Vincent starts as whiny and scared, but as the time progresses he finds courage, finds meaning, finds a place for himself in the world. We get a lot of introspection into him, he will question if he is indeed a monster, if he only brings death to people around him, if he deserves to die. Re-l is as the show begins a smart bitch. She uses the affection others show to her to further her own goals, she doesn't look around herself and hardly notices the people around her. But, just like every other important character, she grows and changes and is a different person by the end. Pino is a cute android that doesn't develop much aside her relations with Re-l, she stays simple, keeps the mood even happy at times and binds the show. She is the example of simpleminded philosophy that somehow works without huge amount of thought and effort, she stays happy and positive, she has her meaning. This covers the main characters but one notable is Raul Creed. He is not the focus of the show, but is one of the most developed characters in anime in general. He starts off as a happy and honest man, but goes through a tragedy. He replaces his sorrow with his work, but work cannot keep you happy. He that tries to destroy and fight because it's the only thing he can do, even if it will have no effect and he knows it. But anger also leaves him empty. The only thing he wishes to see in the end is a certain person, he realises all except the people you love is nothingness. And now for the least important parts, the music and the animation. The music and the voice acting were amazing, the opening was a song by a band called Monoral, whose music is not particulary interesting outside this song. The ending was Paranoid Android by Radiohead, one of the best and most creative bands today. The background music was mostly classical or drum and bass techno, I can't express how well they fit the show. The animation was great, detailed, dark and unusual due to the choice of colors used (most were shades of gray). But there was a problem with Re-l's face, it looked awful at some points. All in all Ergo Proxy is an instant classic. It may not be for everyone, but for those who don't mind a chalange it will be hours of enjoyment.

First of all: ***This Anime is a Masterpiece***! This<em> posthumanistic "end time"-anime</em> is neither colourful nor funny. Ergo Proxy is no animation for short fun or to relax. It's **uncomfortable** and **mature**. One of my favourites!!! Definitly no kiddy-stuff...

This can be considered an anime that appears in 10 years.It's amazing how much can be achieved with the right idea and the right team to bring it to life. At first I was a bit sceptic due to the visuals that didn't seem like anything that I've seen in an anime beofre,but shortly after I started to actually like them... a lot. The audio is excellent,the OST matching the moment perfectly and the ED/OP being amazing. Even though the story started quite slow,like in Steins;Gate,by the time you've reached the second half you won't be able to do anything else until you've reached the final conclusion and revelation. Ergo Proxy is without a doubt a series that isn't meant for anybody.You actually need to pay attention to the plot and to have some intuition,that if you don't want to rewatch it a second time.

Ergo Proxy is a pretty decent anime, but I have to say, I expected more from something that receives such high praise from so many.  Good Points: The characters are well written for the most part (I thought Raul and the Regent could have been expanded on some.) The story has a good 'pull' to it. (never gives you too much information, but always just enough to keep from being frustrating). The setting is dark and grey, but intriguing. Meh points: The animation is sometimes too dark and you can't see what's happening The pop philosophy, presented as profound. (Descartes is classic but overdone, raison d'etre is just french for reason for being; i.e. purpose, etc.) The experimental storytelling style doesn't work 100% of the time. Bad Points: None. The lighting issue is just a 'meh' point for me. Overall an interesting, enjoyable anime.

One of my favourties animes; I know about anime one day, randomly, and it was one of the best decisions I have made.

Solid and amazeing. fast pace and deep story. in a nutshell, i love it

Start a new discussion for Ergo Proxy anime. Please be fair to others, for the full rules do refer to the Discussion Rules page.