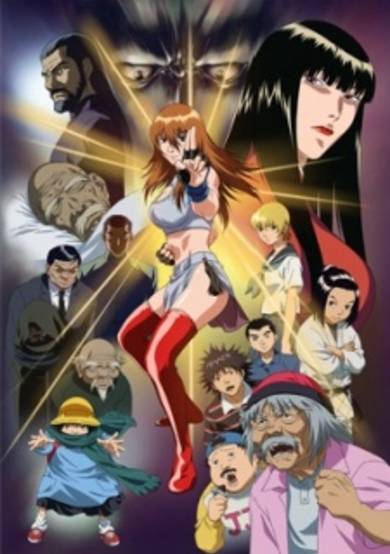 At first glance, Mao Ran is a normal cute girl, but she is a master of a martial arts handed down by Mao family. One day, she is tricked by her grandfather, and forced to take part in the fighting match, "Prime Mat". First, she is reluctant to fight, but fighting against the rivals, she is gradually fascinated by the "fighting". (Source: AnimeNfo)
User Count453
Favorites Count0
Start Date10th Oct 2005
Next ReleaseInvalid date
Popularity Rank6615
Rating Rank5475
Age RatingR
Age Rating Guide17+ (violence & profanity)
SubtypeTV
Statusfinished

A World for Two

I've found that finishing an anime that I really REALLY like can cause me to behave in one of several ways. One of the more bizarre behaviours is that I find myself spending the next few days deliberately watching brainless action oriented series whilst yearning for the more of the series that I'd just finished. This is then possibly followed by a period where I stop watching anime completely. "Fighting Beauty Wulong" is one series that's associated with this type of reaction - not as the cause but as the effect. Finishing "Hikaru no Go" is what triggered this kind of reaction... which led me to pick up "Fighting Beauty Wulong" due to my subsequent urge to watch a crap action series whilst I try to come to terms with the "Hikaru no Go"-shaped void in my life."Fighting Beauty Wulong" (which shall be abbreviated to "FBW" from here on) did not disappoint, and in fact exceeded my expectations by being even crappier than what I'd anticipated. It's essentially tells the story of the main character Mao Lan's participation in an all-women fighting tournament and the "complexities" that went on behind the scenes. I use the term "complexities" loosely because though it did have a good go at telling a complex story, it ended up as a load of tosh that doesn't really make much sense. The only thing that made it complex is the poor story telling that often made it difficult to see what's going on sometimes (though this could be due to the hilariously bad sub I was watching). It's an example where a fighting anime actually tried (quite hard) and failed to make a good story. I guess anime like "Tenjou Tenge" (an example of a fighting anime with a kick ass story) doesn't come along every day...Considering the premises, the fanservice side of FBW is actually surprisingly tame... it doesn't even qualify as ecchi, which can only be a good thing in my book. Another thing I found interesting are the character designs. Considering the title of this anime, you would think all the fights would involve scantily clad beauties duking it out in the ring. But in reality, although there are a few characters designs that can be considered attractive (predictably Mao Lan herself is one), there are at least a couple of fighters who are not. And before you ask, no, it is not due to the shoddy artwork that they ended up with some unattractive characters. Though FBW does indeed look like a low budget series, it's also clear that they made the surprising choice of having some fairly realistically designed female fighters - one of them even look rather masculine. For me, this is a good choice to make, and it's something I applaud FBW for.The fighting aspect of the anime is bit of a mixed bag. There are a few good fights... well actually "good" might be over estimating the quality a bit... and in fact "a few" is probably over estimating the quantity a bit as well. So let me rephrase: there're one or two fights that aren't bad, and the pick of the lot doesn't even involve the main character Mao Lan. This is probably because Lan's special move is this ultra powerful punch that simply annihilates opponents with one hit, which is good for her, but dull for the viewer. I can only think of one significant fight where she doesn't use it (at least, not for a while), and this is during an ultra hyped up fight in the middle of the series between Mao Lan and Megumi, a friend of hers. This fight deserves special mention. First, they spent about 5 episodes setting up this friendly rivalry, raising expectations sky high. When it came, it turned out to be what is probably the most memorable fight in the entire series... but for all the wrong reasons: it's memorable for being one of the most dull, most dragged out fight ever! Megumi was constantly talking throughout the fight, and unlike a lot of fighting talk that you get in well made shounens, her chit chat diminished the tension instead of raising it, to the point that by the end I was grinding my teeth in extreme annoyance merely at hearing the sound of her voice (which was already annoying to begin with), and would have preferred it if Mao Lan just finished her off with the super move. As for the ultimate "boss fight" at the end... it's not really that great. A bit of an anti-climax, really. It's a running theme throughout the anime that the anticipation for the bouts always ended up getting let down by the actual match themselves.It says a lot that my personal highlight of the series is probably the second ending theme, "Tango". In fact most of the music from the series are quite pleasant, but "Tango" distinguished itself by being a great theme with a Latin flair to it instead of the usual jpop. In a weird way, it matched really well with the animation for the second ending credits, where Mao Lan goes through a series of martial arts stances in a traditional Chinese costume. Considering the obvious low budget involved in the making of this anime, I'm impressed by the daring creativity at picking such a theme (as I am with the decision they made with the surprisingly realistic character designs). A pity this unexpected display of panache is not reflected in the contents of the anime.

Start a new discussion for Kakutou Bijin Wulong anime. Please be fair to others, for the full rules do refer to the Discussion Rules page.