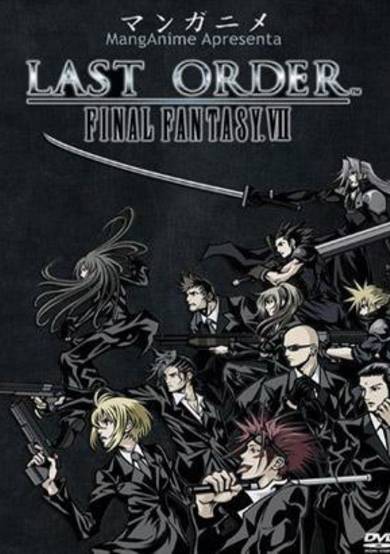 After the destruction of Nibelheim at the hands of Sephiroth, Zack and Cloud are on the run from Shinra Inc. As they make their way back to Midgar, they recall the horrible events that happened at Nibelheim, as well as fight for survival against Shinra. (Source: ANN)
User Count4320
Favorites Count12
Start Date14th Sep 2005
Next ReleaseInvalid date
Popularity Rank2254
Rating Rank4295
Age RatingPG
Age Rating GuideTeens 13 or older
SubtypeOVA
Statusfinished

A short OVA detailing part of the story concerning Cloud and Zak's entwined background from the infamous "Final Fantasy VII" game.If you haven't played that game, there's no point watching "Final Fantasy VII: Last Order" - it's basically some background events told in a linear fashion (as opposed to having to put the bits and pieces together as you discover them in the game) and coupled with having proper animation (as opposed to the original "Final Fantasy VII" graphics that made the characters look like lego men).Considering it's a 30 minute anime, there's not much to say about it. If you've played the game, you'll be familiar with the this segment of the story where Zak and a barely conscious cloud escape like labrats from the Shinra laboratory where scientists conduct experiments to create super soldiers. The story and characters are true to the game, and production values are sky high as you can tell from the blisteringly good animation and explosive action sequences. However, I'm disappointed that they did not choose to base the background music off the tracks from the original "Final Fantasy VII" games. Those simple but effective melodies from the game are waaaay better than the heavy music that they used in this OVA to try and make it more "cool".For the average fan of the original game, "Final Fantasy VII: Last Order" provides some satisfying visualisation of certain events, and will no doubt invoke some fond memories of the game. If you've never played the game though, this won't make much sense to you, so just skip this. Or better yet, go play the game and then watch this, because the game is just incredible. \[insert a few pages of gushing on the original game\]

Critic’s Log - Earthdate: November 27, 2013. Supplemental Review: Last Order: Final Fantasy VII. If you have played Final Fantasy VII and remembered the things shaped the events of the game, then this is for you… Here’s Last Order: Final Fantasy VII. After the destruction of Nibelheim at the hands of Sephiroth, Zack and Cloud are on the run from the Shinra Corporation. As they make their way back to the town of Midgar, they recall the horrible events that happened at Nibelheim, as well as fight for survival against Shinra. To be technical, this is a Studio Madhouse production and from what I can tell about this OVA is that this is what Final Fantasy VII would look like in Anime form, and this sort of a cool special for the Final Fantasy VII series. This was released as part of the Compilation of Final Fantasy VII however, this is the only entry that doesn’t take place before or after the original game. This entry takes place within the original game, except that it does not count within the series’ canon. This OVA was made as a little special for the fans of Final Fantasy VII. As a production standpoint, this OVA looks fantastic and that’s to be expected by Madhouse, but the animation isn’t perfect even though they could have done much more for something that’s only 25 minutes long. The character designs are okay but not jaw-dropping. Some of the animation does have some slight cheap effects. Most of the time, the animation is pretty good.     The music by Takeharu Ishimoto is the weakest factor of the whole OVA, it is forgettable, it has one memorable tune, and a remixed tune from the original game. Everything else is not worth going over and very forgettable. The soundtrack is just uninspired. Except for the ending theme yet that’s not memorable either. As with the voice acting, I should point out that an English Dub does not exist in this OVA. Don’t ask me why, it just doesn’t. Takahiro Sakurai is good as Cloud. Kenichi Suzumura is okay as Zack, and Toshiyuki Morikawa is terrific as Sephiroth. The casting is good for the most part. When it comes to characters, development isn’t such an issue except for some of the members of the Turks who I assume are from the game Before Crisis: Final Fantasy VII. I don’t have much to say about characters because this takes place during the game for most of the scenes. As with the story, it’s pretty much a recap of the events that took place in the game. This may sound questionable for some fans of the game, but if you don’t mind this, then it shouldn’t be a problem. I hate to make this review short but I really don’t much to say about this OVA Last Order: Final Fantasy VII is available by Sony Pictures. It was released alongside the Special Edition of Final Fantasy VII: Advent Children. Since there was a quantity of 77,777 copies, my best guess is that it is out of print unless this was only in Japan. With all that said, Last Order: Final Fantasy VII doesn’t really offer too much except that it is a nice extra treat for the Final Fantasy VII fans. This doesn’t add much to the Final Fantasy VII series, but it does showcase the events from the game well in anime form. It is a little unfortunate a dub does not exist. But with a forgettable soundtrack and the little time that this OVA has, I can honestly say that this is optional viewing. I give Last Order: Final Fantasy VII a 4.3 out of 10, it is NOT REALLY GOOD! Feel free to leave a comment.

Start a new discussion for Final Fantasy VII: Last Order anime. Please be fair to others, for the full rules do refer to the Discussion Rules page.