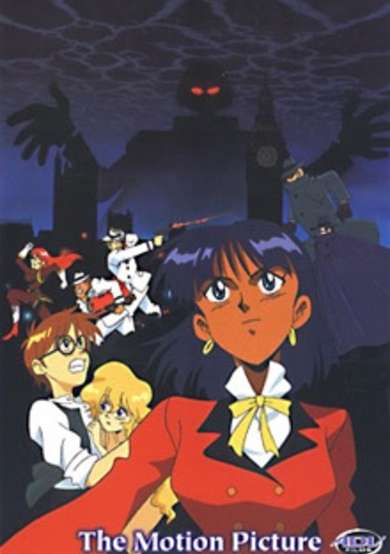 Three years after the defeat of Gargoyle and Neo-Atlantis, a new threat has surfaced bent on bringing the world under his control. Geiger, using advanced robot technology, is attempting to begin a world war, and take control of the devistated world after the destruction has stopped. Once again, Nadia and Jean must fight to save the world, only this time from itself. (Source: ANN)

All Fushigi no Umi no Nadia: Original Movie released episodes

The ending of **<u>Nadia—The Secret of Blue Water</u>** provided a sense of closure to the story, and that is one of the many problems with this theatrical sequel: there is no reason for it to exist. The consensus from many is that **Nadia—The Motion Picture** is actually worse than the awful island/Africa episodes combined. The movie isn't quite that bad, but this should not imply that it's of the same caliber as the series--on the contrary. There are a lot of bizarre inconsistencies in the plot, which basically feels like a hastily cobbled Saturday morning cartoon episode, minus much of the depth and richness that made **<u>Nadia</u>** as a series so appealing. The whole thing tries to be a funny, fast-paced sci-fi mystery adventure, and there are some laughs to be had--but it's hilarious for all the wrong reasons. The action sequences, in particular, are implausibly staged (one involves Jean and Nadia fighting bad-guys--he removes a grenade from his pocket... and destroys a group of enemies in one shot, yet he and Nadia escape unharmed!). Even one-liners from the Grandis gang runs dry in places. Regrettably, the "cartoonish" aura is made even more apparent by the animation. "Sub-par" doesn't even come close to describing how sloppy and unattractive it is. Compared to even the Lincoln and floating island episodes (which were visually awful in comparison to the better eps), it simply looks dreadful. The recycled footage that makes up the first thirty minutes (ironically the best part of the movie, except it's all poorly edited and sequenced in a way that will confuse all but those who are familiar with the series) only reinforces the dubious quality of the movie as a whole. Actually, wasting the first thirty minutes with footage is a major mistake on the filmmakers' part: it provides little to no time for whatever story there is to fully develop. Worse still, the new characters come across as cliche, cardboard cutouts. The villain of the piece in particular, Dr. Giegar, a sort of mad scientist with a silly-looking hairdo, is laughable--it is suggested early on that he is worse than Gargoyle, but he turns out to be just the opposite. He's nowhere nearly as frightening or fully-realized. The central new character to the show is Fuzzy, a blonde (and not very talkative) girl who serves to reunite Jean and Nadia after two years of living apart, and unfortunately, she comes across as the dullest in the show. Probably the only character to show any depth is her distant father, Dr. Whola, the sort of gruff man who at first rejects his daughter for being a carbon copy of the real thing who was killed (oh, surprise), only to realize his error. But even then, there is something about him that feels very forgettable. Remember how most of the island episodes (and the Africa ones) seemed to press reset on most of the main characters and have them behave in over-exaggerated ways? Well, this movie is guilty of doing the same--the biggest problem I have is why Grandis and her gang would go back to a life of crime... *and* even attack Jean! Didn't they already establish a close relationship with the leads? It's also baffling that the movie starts out with Jean and Nadia separated. The pair had already confessed their feelings for each other by the end of the series, so why is Nadia trying to be an independent reporter in London? And how in the world did Jean end up with an annoying parrot as a pet? Well, at least when they become paired up, their relationship at least isn't as grotesquely warped as in the worst episodes, but it still feels hokey and weird. It's even more surprising that Marie, King, Electra, and even Ayerton were written out of all this. (There is a disclaimer that this happens before the events of the epilogue, but come on now!) One thing that is fairly well done about the movie is the relationship between Nadia, Jean, and Fuzzy--not something I was expecting to say. Unlike the Africa village episodes, which jammed in a useless and mean-spirited love triangle, this one is not as annoying--there is no issue about Fuzzy's age and Jean remains consistent. In fact, there are two very cute romantic interludes between Jean and Nadia which at least provide some charm (one on a boat, and at the end). And while the resolution of the triangle regarding Fuzzy did feel very much like a cop-out and lacked emotion, it at least wraps out inoffensively (albeit predictably). Believe it or not, the other saving grace about the movie is the dub, provided by ADV's Monster Island studios. <u>**Nadia**</u> has always been one of my favorite dubs to listen to, and it's a treat to hear the principal cast reprise their roles. Rather amusingly, the script even works in a joke about Jean's French accent! (And while it's still pretty shaky in this movie, I can't imagine Jean without it.) The new characters are fairly well voiced too, particularly Eric Henshaw as Dr. Whola; they do their best with their cardboard cut characters and provide consistent energy and liveliness. All in all, however, I will not be visiting **Nadia — The Motion Picture** again any time soon. Wasting 30 minutes of recycled footage, as mentioned, was a bad idea, and it's even more disappointing that there wasn't much more thought put into the script. The original creative staff also had nothing to do with this movie; it was simply made just to cash-in on the show. As a matter of fact, you can just skip it and you won't miss much at all.

Start a new discussion for Fushigi no Umi no Nadia: Original Movie anime. Please be fair to others, for the full rules do refer to the Discussion Rules page.