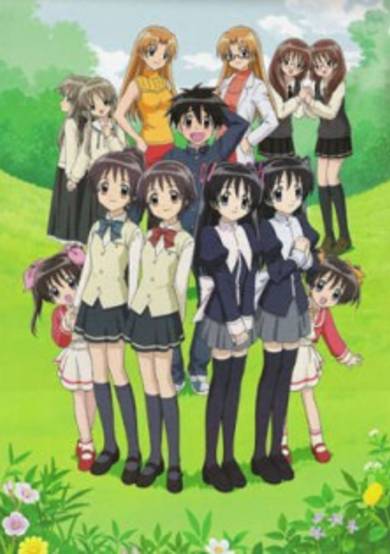 With his mother dead and his father working abroad, Futami Nozomu returns to the town where he lived as a child, to attend high school and work part-time at a local shrine. He soon finds himself caught up in a local legend of twin girls loving the same man. And there are many twin girls in this town.... (Source: ANN)
User Count2566
Favorites Count1
Start Date6th Oct 2004
Next ReleaseInvalid date
Popularity Rank3089
Rating Rank7832
Age RatingPG
Age Rating GuideTeens 13 or older
SubtypeTV
Statusfinished 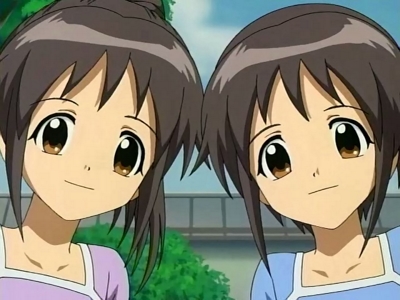 At the Town with the Grave of the Twins

Nozomu comes back to the town he grew up before his mother died. He sees a pair of twin girls whom he thinks is his old childhood friends, the Ichijō twins. He realises they are not his old friends after following them but when he tries to help them after they unknowingly lose their purse in a convenience store, he is accused of being a thief. After he leaves it turns out that he was wrongly accused. He meets his carer, Miyabi, and the Hinagiku twins with whom he will be living, along with their pet goat Billy. He finally meets the real Ichijō twins who call at the house. Later when he starts school as a transfer student, he meets the twins he met in the convenience store who are also transfer students. They introduce themselves as the Sakuratsuki twins. He also meets Ai, his teacher, and Keisuke, another old childhood friend. The Ice Cream from our Memories 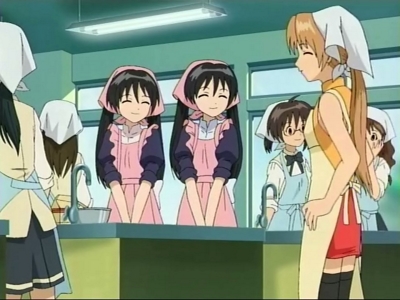 An Apple Pie has the Flavor of Love

The Sakuratsuki twins join the home economics class with the Ichijō twins. They are to make apple pie while Nozomu attends the technology class. Both twins ask Nozomu to taste their pies, but their pies end up as failures. The Date and the Strawberry Tart

Nozomu is planning to meet the Ichijō twins at a cafe to eat strawberry tart the next day but he doesn't remember where the cafe is. They send him directions by fax because he has to run an errand with the Hinagiku twins. The next day, he is unable to find the fax or the Kaoruko's phone number, but Billy is sick. Nozomu meets Ui and Koi Chigusa at the vet where they discover that Billy had eaten the fax. 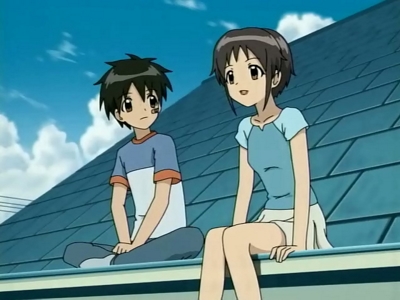 When Time Started to Move

The mid-term tests are coming up and Nozomu has to study, but Billy chews up his English notes. He goes to the Ichijō twins' house and borrows Sumireko's notes and later meets Kaoruko when he is photocopying the notes at the convenience store. He discovers that both Sumireko and Kaoruko only made the childhood promise with him because of the rivalry between them. 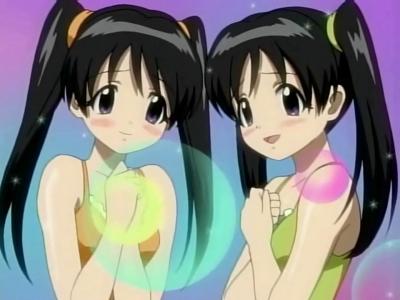 Nozomu applies for a holiday course together with Keisuke and the Sakuratsuki twins, although it was only Keisuke's idea to apply. There he meets an old friend, Hiyama Yuuya, along with the Ichijō twins, who has earlier invited Nozomu to the beach. Nozomu then became displeased, seeing how the Ichijō twins are being more close to his old friend. Later, Yuuya tells Nozomu of how he feels for Kaoruko. A Jewel Case in Midsummer

Nozomu, the Ichijō twins, the Hinagiku twins, and Keisuke are invited to the Sakuratsuki mansion. After fishing and a barbecue, the group decide to play hide and seek. As Nozomu is trying to find a hiding spot, Yura and Kira let him inside the locked room because he is a special person to them. They confess their love to him and allow him to tell them what he feels about them later. Nozomu meets Sōju painting at the shrine and they become friends. As Nozomu is buying supplies for the culture festival, he realizes that he is being shadowed by a mysterious person and there have been a girl asking about him at school. As he leaves school, Sara appears before him and demands him to go out with Sōju and separate himself from the other twins. 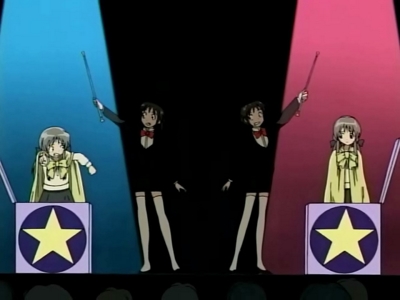 Pastels for a Sunset

Nozomu invites Sōju and Sara to the culture festival. After Sara causes a ruckus at the spooky cafe Nozomu's class had put on, his classmates allow him to have the rest of the day off to get her out. At the art club's room, Sōju is allowed to draw portraits with the art club members but as the festival comes to a close, she faints. Nozomu discovers that one of Sōju's pastel's is gone and searches the dumpster because Sōju's once told him that it was precious to her. 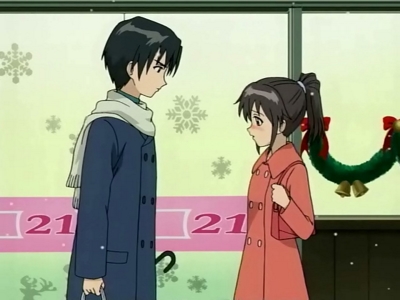 Nozomu meets with Yuuya at the bookstore and Yuuya decides that he'll confess to Kaoruko on Christmas eve. He then shows a bad attitude towards her unintendingly and then proceeds to the Christmas party, But the Christmas party isn't for everyone. It turns out its a party just for him and Yura and Kira.

What can I say about Futakoi? Many reviews of this anime are typically centered around people praising it. I, however, am not here to do so. If you are someone who is either new to anime and is looking for something to get yourself started or really have no "standards" when it comes to your enjoyment then please don't let me deter you from this. For a beginner, this is probably perfect. It has everything you could need: characters, music, and of course DRAMA...now that being said I would like to speak to the more...er... veterans of anime. If you have any standards what-so-ever for anime then I would advise you to stay away from this one. I am one of those people that feel as though all a good anime needs to hold itself together is somewhat decent animation, good soundtrack/audio quality, and characters that don't have the personality of a wet noodle. Anime has to have some form of soul that drives it, something people seem to have forgotten to tell the creators of Futakoi. If you have those three characteristics acting in conjunction then you can generally get away with outlandish ideas or settings. First, I would like to cover the animation of this show. It's pretty bad. Plain and simple. Now I won't be too hyper critical about the animation style simply because this is from the early 2000s (2004) era of anime and that was kind of a weird time for animation. It was almost as if the animators were wanting to branch out with new ideas but at the same time were scared of trying anything new so they kept with the older style of pointier jaw lines, darker color values, and eyes that either look dead or have weird unnatural catch-lights (look up anime from then and you will see what I mean). Moving on, the sound in this show. My. God. I understand that these characters are in their last year of middle school, but come on. Have a little variety. Almost EVERY.SINGLE.CHARACTER. has a high pitched pre-pubescent voice that makes your ears want to void themselves of blood. The only character(s) that don't have a completely terribly high voice is the sister of the weak-bodied artistic twin and the main character's old rocket loving friend from kindergarten. Both of which are pretty minor apart from the DRAMA that the childhood friend brings (SPOILER ALERT: he likes one of the childhood twins -gasp-!). Apart from the dodgy voices what really caps off what is wrong with voice acting is when you can tell that they are in a sound booth that.isn't.sealed.properly. At times, you can hear the distinct feedback of the audio bouncing off of the walls and hitting the mic. Now, am I being picky there? Yeah, I am only because I have had to work with editing audio before and when it comes to an anime, voice means everything. EVERYTHING. Since it's not a live performance the only way to convey any emotion is through voice and clarity and when you do a half-assed job of audio, well then, you kind of screw it up. While I am on an audio rant let me cover the soundtrack of this. What even. The music sounds really generic and doesn't stand out at all. What makes matters worse there is some strange angelic hymn that enjoys playing every time a new pair of twins is introduced which isn't often, but at the same time is. There is literally SIX PAIRS of twins. SIX. so out of 12 episodes you hear that chime/hymn SIX times. Okay, finally I will talk characters. UGH. It is REALLY bad when you can guess a characters' personality from simply looking at a picture of them. Even worse is when you are stuck with said character(s) FOR THE ENTIRE SHOW. I didn't find a single character I truly liked in this anime. All of them seem flat and boring. The main character comes off as an indecisive prick who seems to lack the common decency to convey any intelligent thought. During the DRAMA of the show the creators make him seem like the good guy and that his childhood friend is in the wrong leading to the main character saying to himself "I can't lose!" LOSE WHAT! ONE of the sisters of the FOUR pairs that are legally in your range to date. Not to mention SPOILER: the childhood friend gets shafted anyway because NONE, I repeat, NONE of these characters seem to understand what emotion is. At one point the childhood pair of twins get in a fight with each other over how they feel about the main character which lasts all of 2 minutes and ends with them suddenly rooting for each other. Excuse me? Realistically, these two would have been staring daggers into each other for days, but no, everyone has to be "happy" in this anime. happy,happy,happy... Oh, and to throw this out there, if you are looking for an anime that has any form of commitment relationship wise. STAY. AWAY. SPOILER: in the last episode it literally goes from the rich twins about to be transferred (oh noze) to everyone partying after passing the high school entrance exams. wut. Yeah. remember HAPPY. PS The phrase "that's so nostalgic!" or any deviation now makes me want to kill myself because of this anime. Seriously. They use it at the most awkward times. "Hey look it's the old department store we used to eat ice cream at! That feels so nostalgic!" Seriously, the writing is cringe worthy. NOW all that being said this is an older anime so I SUPPOSE I can't be too mean (but I will be) about this anime aaaaannnnddd I am currently on a quest to watch bad animes at the time of this review buuuutt that doesn't change the fact that...you know what.... no I'm done here. Anymore thinking about this will only damage me more.

Start a new discussion for Futakoi anime. Please be fair to others, for the full rules do refer to the Discussion Rules page.