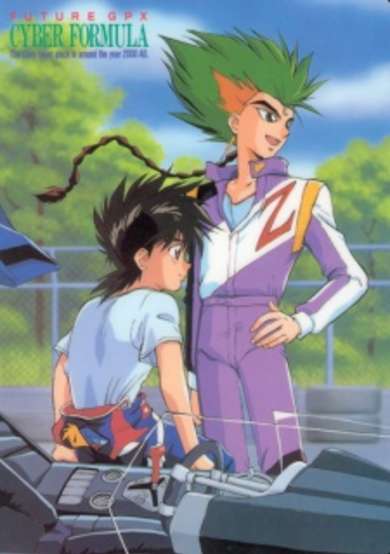 14-year-old Kazami Hayato is the youngest driver of Cyber Formula, a Grand Prix in which each vehicle is equipped with computers to aid in racing. With the help of Asurada, the most advanced cybernavigation system, and team Sugo, Hayato races to become the winner of the 10th Cyber Formula Grand Prix. Along the way, Hayato will have to learn what it truly means to be a racer and that victory cannot be achieved simply by driving the best machine. In addition, Kazami will have to gain the respect of the veteran racers, thwart those who attempt to steal Asurada, and participate in races outside of Cyber Formula. (Source: ANN)
User Count555
Favorites Count3
Start Date15th Mar 1991
Next ReleaseInvalid date
Popularity Rank6102
Rating Rank3150
Age RatingPG
Age Rating GuideChildren
SubtypeTV
Statusfinished

The Day That Destiny Was Decided

Birth of the Youngest Racer

Aim for the All Japan Grand Prix!

A Nature Boy of Hokkaido

A License to the World

The Battle of Rainy Niseco

Cyber Formula is a futuristic racing anime that talks about a 14 year-old boy racing with professionals.Before I start, I just like to say that this is the first time for me to review anything, and I'm honestly just doing it because no one other did.Starting with the story: It's not out of the ordinary; a boy with responsibilities overcoming various events and learning from them. Yet somehow it managed to be very gripping, and I loved.... most of it. As for the animation, I'd say it's incredibly great. Most of the people might not agree with me, but I'd like to remind you all that this came out in the early 90's, and I think Sunrise did a great job with the animation and character designs. Then there's the music, which was simply awesome, I'm still singing the OP from time to time for the past 5 months. And all the sound effects during the show really made me feel like I was there on the circuit. As for the characters, they're between typical and outstanding. Starting with the main character Hayato, who even though acts like a typical hero, can sometimes show a lot of human selfishness and arrogance. Then there are his crew who were definitely one of the reasons I consider this show one of my favorites. From the cute girl with the obvious crush on Hayato, trying to help him anytime she can, to the maintenance team containing the likes of the typical computer nerd and a tomboy manager. And I can't forget about the competitors whom we get to see parts of the story from their side to a point that we sometimes want to cheer for them over Hayato.Overall, I give this a 9/10 and suggest it to anyone who likes sports anime's.

Start a new discussion for Future GPX Cyber Formula anime. Please be fair to others, for the full rules do refer to the Discussion Rules page.