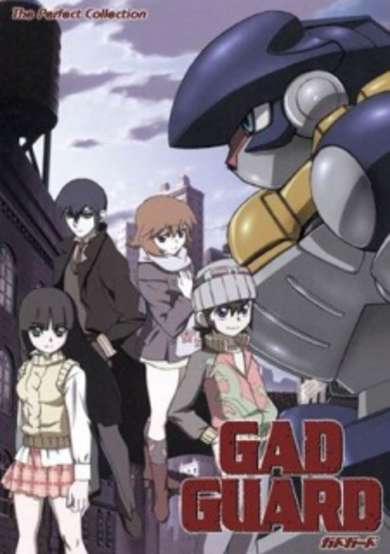 Several hundred years in the future, the resources of the Earth runs out, and the progression of the human race has stagnated. The world is now divided into "Units". A boy named Hajiki Sanada lives with his mother and sister in Unit 74, in a place called "Night Town", in which all electricity is shut down at midnight. The key in this story is an object called the GAD. GADs have the ability to reconstruct materials while reacting to feelings of an organic life. The size and shape of the resulting product seem to be different depending on the kinds of feelings that the life possesses. When Hajiki comes in contact with one by accident, it transforms into a huge robot--a Tekkoudo, or "Iron Giant"--which Hajiki names Lightning. And soon he realizes that he isn't the only one with a Tekkoudo, and must find out how to deal with those others who he feels are the "same" as himself. (Source: ANN)
User Count1306
Favorites Count4
Start Date16th Apr 2003
Next ReleaseInvalid date
Popularity Rank4284
Rating Rank5977
Age RatingPG
Age Rating GuideTeens 13 or older
SubtypeTV
Statusfinished

Looking Up At the Same Sky

One day, in the city of Night Town, a boy named Hajiki Sanada is assigned to make a special delivery for a very mysterious client. Hajiki accidentally opens the package, only to find a mysterious black cube known as a GAD! The next day he meets a girl named Arashi, and the thieving Jack Gang. The Jack Gang tries to steal the GAD, but when Hajiki bonds with it, the GAD reacts...

Putting the Pieces Together

After forming a techode from the GAD, Hajiki is confronted by Katana, the pilot of a Heavy Metal named Seven. Hajiki and the Techode manage to drive him and the Jack Gang away. Unfortunately, Katana burns with the desire to destroy them both. Elsewhere, the mysterious client who started this in the first place is revealed; and she wants to claim the Techode as her own... if she can!

On a Street Corner in Night Town

Catherine Flaunbert is the new employee at Hachisuka's company and Hajiki isn't too happy about it. Nevertheless, Hajiki follows one of her leads on a GAD to the junkyard. Unfortunately for Hajiki, his hunch was correct, as this just leads him into more trouble, as the Jack Gang and Katana, now sporting their newly formed Techode, Zero, track him down. In the middle of the confusion, Hajiki meets a young girl who owns a Techode of her own...

Hajiki forms a bond with a boy he rescued from a gang of thugs. As they trail a jewel thief, Hajiki finds there's more to the little boy than it seems.

And Then the Rain Will Fall

A GAD is being escorted to the Day Town Museum as a jewel. However, Katana and Wanda soon team up and succeed in stealing the GAD!!

Aiko has an idea that all the Techode owners could be friends. Thus, he confronts Takumi, Hajiki and Katana. Meanwhile, Catherine persuades Hajiki and Lightning to steal a GAD for her that is being smuggled from a museum in Day Town. It turns out the smugglers have hired Katana and Zero as their bodyguards! Aiko and Takumi join in when the GAD bonds with the smuggler and becomes an Atechode. All the Techodes will have to work together to stop it from reeking havoc on the city. But, can this be done...?

If I Can Fly

Catherine hires Hajiki and Lightning to steal a coffin that a man was supposedly buried in, along with a GAD stone. The police soon catch on, and discover Hajiki. They chase him and accidentally lose the handle of the coffin, which turns out to be the GAD! Meanwhile, Arashi ponders on the idea of having her own Techode. She gets a job in Day Town as a billboard worker. The GAD pieces are loitered all over the town and end up near Arashi. Is it meant for her? Or it something worse?

Two Guardian, or Techode, Hunters have appeared in Night Town to investigate the recent appearances of Techodes all over the city. They soon meet up with Lightning, Thunderbolt, and Messerschmitt, but find it odd that kids are riding them. They are convinced that the teens are being brainwashed by the Techodes and are ready to destroy them. Hajiki tries to convince them that not all Techodes are bad. During the fight between the Guardian hunters and Hajiki, Aiko and Takumi, Catherine and Hachisuka bring Hajiki a very powerful laser to combat the hunters. As Lightning is using it, the laser begins to fuse into Lightning's arm! Hajiki struggles to get through to Lightning, but is this just proof that the Techodes really are as destructive as the two hunters say?

Zero continues to take damage after losing its arm to an Atechode. Thus, Katana sets out in search for repairs. Will she be successful?

Bundles of Bills in the Setting Sun

Lightning and Lightning are chased through Night Town by Mary and Chris.

Gad Guard had the potential to be a decent anime. The plot was interesting and the mood of the show was unique to say the least. I mean any show dealing with young kids obtaining Gun… I mean mechas has to be good right? Sadly the execution of the story elements left something to be desired. I’m getting ahead of myself so let’s start with the story.Gad Guard tells the story of Hajiki Sanada, a 16 year old street smart teenager working as a delivery boy in a city called Night Town. Due to the depletion of Earth resources cities have been separated into units and every night at midnight the electricity gets shut off. This leads to a surge in organized crime and black market deals. During one of his deliveries Hajiki gets involved with a cubed shaped object called a Gad and it seems that everyone wants it in the underworld. It’s during a skirmish for the Gad that it shows its true colors as it transforms into a Techode.Like I said before the story had a lot of potential. The contrast between futuristic mechas and the 1920’s mob crime made for an interesting plot in the beginning. Yet instead of focusing on this contrast other story elements are brought in that disrupt the balance. There were also many execution problems as well. While Gad Guard focuses on Techodes the show never truly gives the background story on the Gads and how they came to be until the end of the anime. Some of the characters also have a deep connection to the Gads and Techodes yet their stories are never brought up even though they hint at it throughout most of the anime. Most of the middle part of this anime was filled with episodic adventures that felt more like fillers than anything else. Lastly the ending goes so far on a tangent that it doesn’t feel like you’re watching the same anime.Now the animation isn’t going to win any awards but it wasn’t all bad. The saving grace in the animation department is the Techodes themselves. Each felt unique and well crafted to suit the owners as well as give off a futuristic hope in such a bleak environment. And when I mean bleak I really mean it. Night Town during the daytime looked like all the color was washed out except for gray and brown. During the night scenes everything was either too dark or blinded by the moonlight. It doesn’t help that until the near end of the show Night Town is the only location you’re going to be seeing so having to see nothing but brown and gray hurts the eyes. Needless to say you aren’t going to find great quality here and while I’m not saying it’s the worst it’s just that it feels that there is no originality in the series. The music is practically nonexistent. In keeping with the 1920’s theme most of the music including the opening rely heavily on jazz. And while it’s interesting in theory, just like the story plot, the execution was not up to par. It felt like the music was there because it had to be there. The background music in Gad Guard has no feeling and it doesn’t help set the mood for any scene in the show. The music just sits there never really standing out or helping improve the quality of the show.Overall Gad Guard is just another mecha show that you won’t remember after you watch it which is a shame. The idea of this anime had so much potential. Sadly the inconsistent story and bleak atmosphere makes it a passable show. So if you never watch it you’re not missing much.

Start a new discussion for Gad Guard anime. Please be fair to others, for the full rules do refer to the Discussion Rules page.