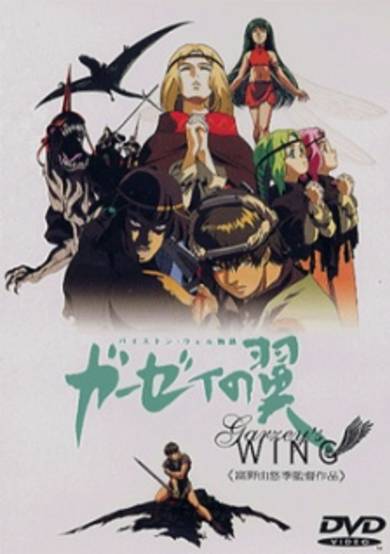 Yesterday, Chris's biggest problem was getting into a good college. Now, his spirit has been hijacked by wings of light, and transported into an ancient world. Summoned by an enslaved tribe to lead a bloody revolution, Chris must quickly adapt to his new surroundings... or die. (Source: ANN)
User Count1912
Favorites Count11
Start Date21st Sep 1996
Next ReleaseInvalid date
Popularity Rank3595
Rating Rank11307
Age RatingPG
Age Rating GuideTeens 13 or older
SubtypeOVA
Statusfinished

You walk into a room with nothing but a pair of glasses and a drink and then you start watching this fucking piece of shit anime called Garzeys Wing. A show best served with a fucking generous helping of alcohol and maybe your dick out I don’t know.  If this feels weird to read thats because Im writing this after my 4th drink or so and I’m feeling quite inebriated.  Garzeys wing opens with the best 4 minutes of anime I’ve ever seen. Context? Thats for pussies. Grazes wing has the balls to take the reigns of the story and leave you dazed and confused. If you want to know whats going on read the manga or something you fucking idiot. IDK if there is one but a masterpiece like garzeys wing cannot possibly have any flaws as it has the budget of a ham sandwich and a packet of crayons given out for free at a restaurant for you to draw on the fucking tablecloth with you know what i mean? I don’t even know what garzeys wing is other than a weird love triangle that i didn’t even know existed until the third episode and someone talked about how bell girl was the one responsible. People were talking like it was a super power or some shit but it was revealed (?) that its actually some kind of summon. Summons are fucking broken in most JRPGS and it makes sense that it would be broken here because this fucking rag-tag army of randomians wins against a supposedly fucking strong ass nation of an army because of dumb magic bullshit and a puck ripoff. Fuck my finger hurts I just burned the shit out of my finger making mac and cheese ow ow o w ow ow ow ow ow ow ow ow goddamnit i should probably get some ice. But back to GW it is amazing, the english dub specifically btw the gap dub is like meh and no one gives a shit but the dub had no acting whatsoever like they brought the fucking interns out on this one man jesus christ.  10/10

Garzey's Wing is hilariously bad, to keep it succinct. The story is completely inert with no real ending, the dialogue is ridiculous, and the voice acting is audio diarrhea. The sub is pretty standard voice acting for the time, but the dub is straight up garbage, and makes it an absolute must-watch. Really, everything about Garzey's Wing is bad. The cuts and general direction are awful, multiple characters appear and then fail to serve any purpose at all, and the animation/audio-mixing are just perfectly piss poor. The thing that really makes Garzey's Wing such a fantastic failure is that it fails to even maintain its level of shittiness; the first episode sets it up to be a great hour and a half watch, but after 20 or so minutes it quickly becomes clear that even its awfulness doesn't make it entertaining all the way through. I basically had to force myself through the last episode for the sake of it, no longer even laughing at the shitty delivery or the awful animation. All in all, I'd say the first episode is an amusing watch, something worth showing your friends and sharing a laugh. Other than that, there's no reason to watch Garzey's Wing other than just saying you did. It's truly brilliant.

Start a new discussion for Byston Well Monogatari: Garzey no Tsubasa anime. Please be fair to others, for the full rules do refer to the Discussion Rules page.