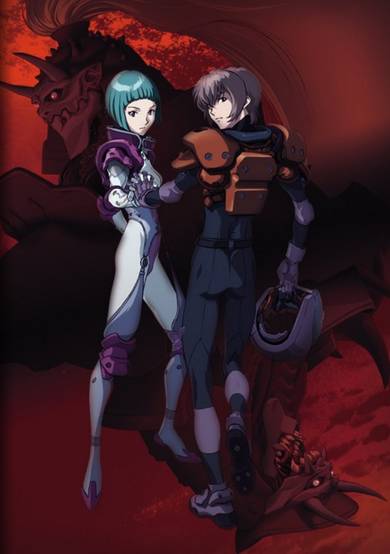 The flames of war explode in the Middle East as two shadow forces unleash monstrous new weapons of mass destruction! But in a world in which giant robots are real, the most dangerous weapon of all lies buried within a human mind. Yushiro, the fourth son of the mysterious and powerful Gowa family, finds himself at the center of events that will change the future of mankind forever! Nothing can prepare the human race for what is about to be unleashed in Gasaraki! (Source: Sunrise)
User Count1827
Favorites Count10
Start Date4th Oct 1998
Next ReleaseInvalid date
Popularity Rank3681
Rating Rank6016
Age RatingPG
Age Rating GuideTeens 13 or older
SubtypeTV
Statusfinished

On the Ancient Stage of Stone

Yushiro's movements, as part of a Gowa experiment, bring into existence a singularity sought by the Gowa Consortium. Suddenly, another dancer cries out from elsewhere pleading, ""Don't bring back the terror!"" Sensing the chilling voice, Yushiro falls out of his trance and the experiment fails.

As the Gowa Consortium evaluates the failure of their experiment with Yushiro, the United Nations responds to what seems to be a weapons test in the renegade post-Soviet Republic of Belgistan. After a successful air attack, the allied ground forces suffer a startling defeat, leading the Japanese company to reveal the secret of the Tactical Armor systems. It seems these units may have been responsible for the U.N. defeat at the hands of the Belgistanians.

The Gowa Consortium clears the way for the deployment of the Tactical Armored System to Belgistan, enlisting Yushiro to come along. In the meantime, an American tank battalion faces staggering losses on their incursion into Belgistanian territory, confirming that Belgistan does possess bipedal weapons with formidable attack abilities.

The TA units arrived in Belgistan whereupon they are ordered to capture Shrine Hill, the location where the Belgistanians allegedly detonated their weapon of mass destruction. Surprising both the multinational forces and the TA unit, researchers from the Gowa Corporation arrive and confirm that Shrine Hill is virtually identical to Stage of Stone on which Yushiro performed his initial dance. This fact is confirmed when Yushiro enters a trance mode, leaves his TA and begins to perform the Gasara dance on Shrine Hill. Undeniably, a connection exists between Belgistan's release of power and the Gasara dance.

The Tactical Armored units of the Gowa Corporation clash with enemy TAs deep within Belgistanian territory and capture a defeated unit. Meanwhile the public is fascinated by the use of the new bipedal weapon systems, and SNN's very own Ronald Fagan attempts to get live footage for the viewing public.

The evil organization Symbol institutes a coup in Belgistan to hide evidence of their involvement. The new leadership, lacking knowledge of Symbol's hand in events, immediately pleads for a ceasefire. Yushiro uses the opportunity to sneak deep into Belgistan and meet Miharu face-to-face, and the American government uses the pretext of weapons inspections to gather intelligence on the Gowa Corporation's bipedal weapons.

The squad of TA pilots defies orders to rescue Yushiro from Symbol forces in Belgistan. The Gowa Corporation fights to keep their technological secrets and captured enemy TA unit from the snooping Multinational forces and the hostile troops of another fictional post-Soviet Republic, the nation of Armekistan.

Amid evidence that the Japanese government is involved in some sort of cover-up regarding the TAs, Yushiro's elder brother Kazukiyo Gowa meets with Hiraku Nishida, an elderly, blind warrior who wishes to unleash selective violence against the Japanese people in order to strengthen Japan against growing opportunism and selfishness. At the Gowa laboratory the plot takes a startling twist when Miharu breaks into the Gowa headquarters to retrieve the missing components taken by the Japanese TAs in Belgistan. As she exits the plant, Miharu reveals to Yushiro the startling secret she has uncovered during the raid - the Gowa family refers to Yushiro as ""the test subject"" and that the real Yushiro Gowa has been deceased for years. As the episode ends, Yushiro's entire existence is mired in uncertainty.

In an attempt to understand the information Miharu has imparted to him, Yushiro returns to his family home to confront his parents. At his ancestral home, Yushiro meets with his instructor, Sorachi, who leads Yushiro into an abandoned storehouse. There Yushiro discovers the cryogenically preserved body of Sorochi's son Ku-ya as well as a body that is probably his, along with the slouched form of a formidably-advanced robot, known as the Kugai. Meanwhile, Yushiro's sister, Misuzu, and Ataka, one of the female TA pilots, have followed Yushiro to the site, where they are surprised by the sudden appearance of Miharu and another of the symbol weapons platforms, known as Ishtars.

Sensing the proximity of Miharu and the other Symbol Ishtar (known colloquially as Fakes), Yushiro instinctively begins to perform the Gasara Dance. Before long, the stomach of the abandoned robot, known as the Kugai, opens up and takes in Yushiro as a pilot. The robot, adorned like an ancient Japanese samurai, battles and defeats the intruding weapons platforms and captures Miharu. When Yushiro leaves the Kugai, his master, Sorochi, informs him that Yushiro is a kai, a man with the special talent required to control the Kugai, and that the Kugai itself is a gift from Gasaraki. Sorochi says Yushiro must travel to Kyoto with Miharu in order to find out more.

<i>Gasaraki </i>is probably the most underrated and under appreciated anime I have ever seen. As the show opens, we get a unique opening theme called "Message #9". It's a very pretty, electronic and experimental song; very similar to Bjork. Hell, the OP could've been written by Bjork. The anime itself blends with science fiction, politics, mysticism, Shinto, and Noh theater. Our two main protagonists are Yushiro Gowa and Miharu, and both happen to be pretty strange yet interesting. Yushiro is the fourth son of the wealthy family, the Gowas. He is a young Noh dancer who has been brought into the military at the age of 15 to pilot mechanical robot called a TA. He's very quiet but he does develop a bit as the series progresses. MIharu is a young girl who is a test subject to pilot TAs, just like Yushiro. Their chemistry together is intriguing, and their screen time together keeps me hooked. Although, I would love to see them develop a bit more. I don't know why, but maybe I feel that 25 episodes isn't enough. I hope one day they reboot the series so we can dive into them more, because I find Yushiro and Miharu to be extraordinary characters and they deserve more screen time than the rest. A lot of people complain that this anime is too boring because of the political aspect, and I don't blame them. I'm not a big fan of the political sub genre, but blend it with science fiction and Japanese culture, then it will be very interesting. A lot of people also compare <i>Gasaraki </i>to *Neon Genesis Evangelion*, just because they're both mecha. That's like comparing <i>Evangelion </i>to *Gundam*. The problem with <i>Gasaraki </i>is that it came out at the time <i>Evangelion </i>was popular. If they reboot it now, maybe it would deserve more praise. Overall, I enjoyed *Gasaraki*. If you are a die hard mecha fan, you will love this. I just hope they reboot it for a new audience.

Start a new discussion for Gasaraki anime. Please be fair to others, for the full rules do refer to the Discussion Rules page.